The Young Riders not only won fans over with action-packed stories, but also with the depth of the characters, their relationships, and growth throughout the course of the show. From seasoned actors to new faces just starting out in the industry, the talented cast was diverse, versatile and committed, as they portrayed lawmen, townspeople, and the young heroes who rode for The Pony Express.

Cool Facts About the Cast 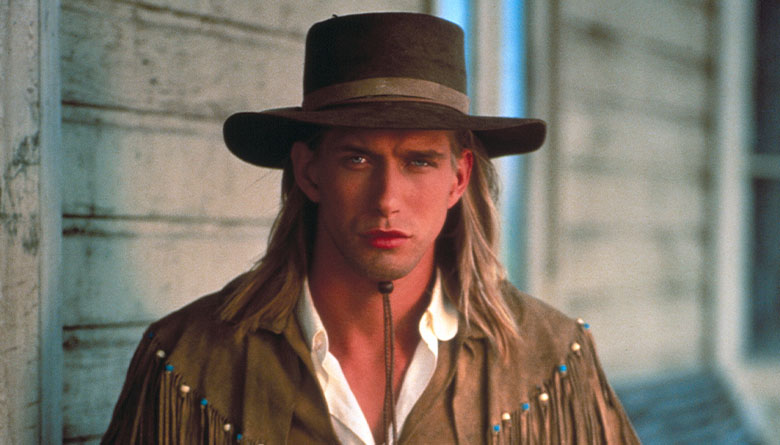 Stephen Baldwin appeared in Ty Murray’s Celebrity Bull Riding Challenge, on CMT, but had to drop out of the competition when he broke his shoulder blade and a rib in a fall from a wooden pontoon. 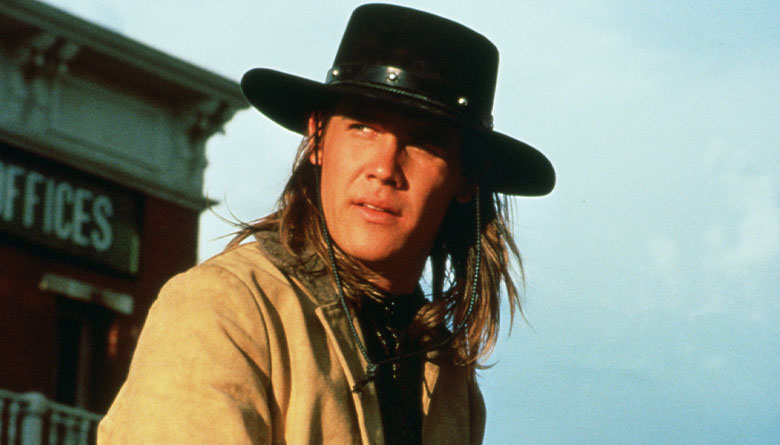 Yes, that last name is familiar! Josh is the son of renowned actor, James Brolin, and both father and son have played U.S. presidents:

A lot—with bonus INSP connections! Josh was named after Josh Randall, the main character on the Western series, Wanted: Dead or Alive, which airs on INSP. Who played Josh Randall? Steve McQueen, the grandfather of Steven R. McQueen, who co-stars in INSP Films, The Warrant.

Talk about a versatile actor! Brolin plays everything from the hero, to the villain, to the seriously unattractive cyborg, in a variety of film franchises based on comic books!

Where else can you see Josh Brolin on INSP? In addition to his recurring role on The Young Riders, you can catch Brolin as outlaw Tom Chaney, in the 2010 remake of the classic True Grit, which occasionally airs on INSP.

Josh Brolin and wife Katheryn Boyd received the ultimate Christmas gift–a beautiful baby girl, born in the evening on December 25, 2020! The couple named their new bundle of joy Chapel Grace because of the solace they find when visiting chapels in their travels. 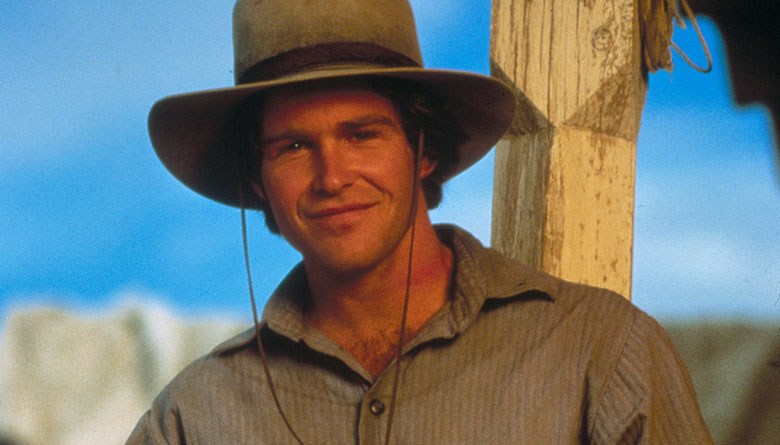 Ty Miller might be a creative type, but he holds a BA in business from the University of Southern California.

Miller was a big fan of Westerns even before his role on The Young Riders. Some of his favorites: Butch Cassidy and the Sundance Kid, Wild, Wild West, Bonanza, Gunsmoke, and The Big Valley, among other classics.

10. As Seen on TV—After The Young Riders…

Miller had several guest appearances and recurring parts after his stint on The Young Riders, including The X-Files, Without a Trace, and A Girl Named Jo. 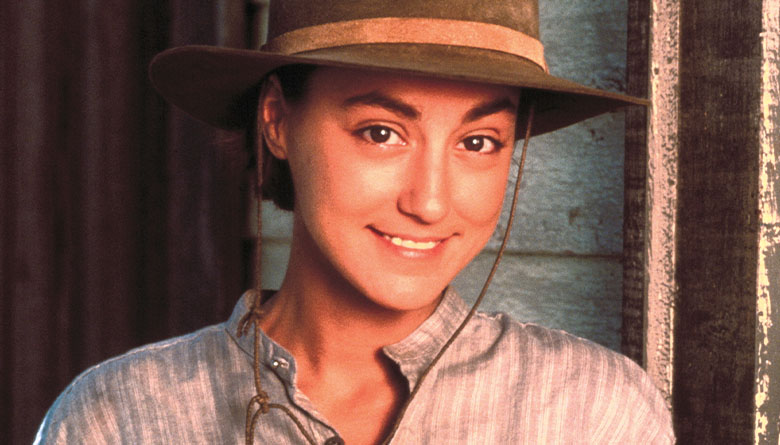 After her role on The Young Riders ended, Suhor paid it forward, leaving a lasting legacy. She founded Art’s Sake Studio, a school for film acting, in Winter Park, Florida.   With the passion and exuberant spirit for which she was known, she shared her skills and depth of knowledge to educate other actors in the craft she loved. 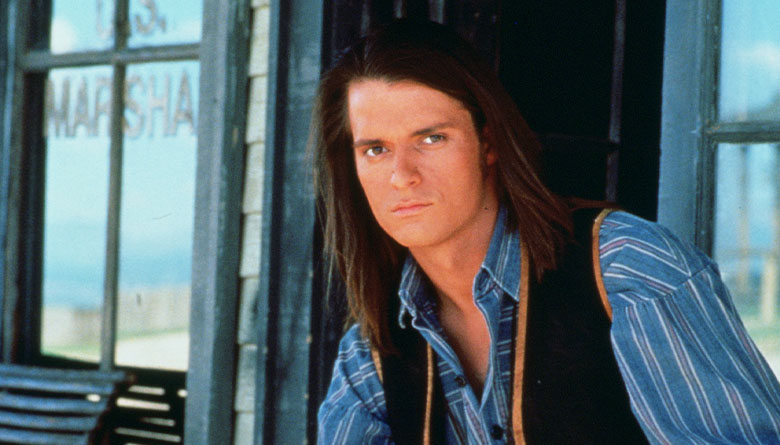 In 1990, People magazine named Rainwater one of “Tinseltown’s 10 Sexiest Bachelors.” Also making the cut were: Alec Baldwin and Tom Cruise.

As a voice actor, Rainwater’s roles include: 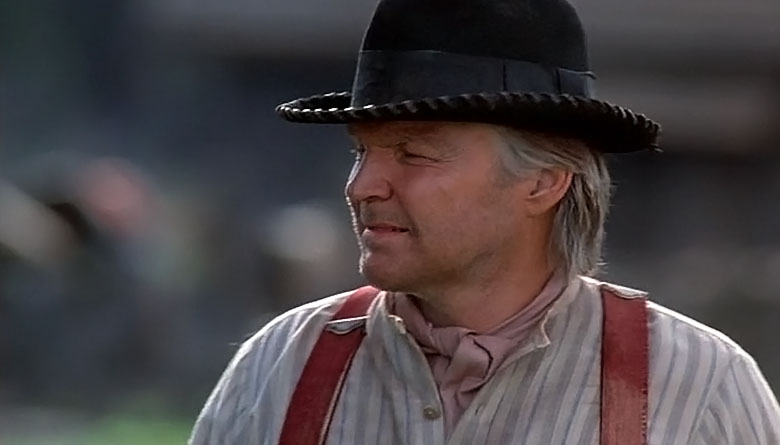 You just might catch Anthony Zerbe when you least expect it on INSP!

Zerbe has appeared in Walker, Texas Ranger, How the West Was Won, Gunsmoke, Bonanza, The Big Valley, and with John Wayne and Katherine Hepburn in Rooster Cogburn.

17. Into the Wild Blue Yonder…

We’ll let Zerbe tell it in his own words!

“I became a villain because of my eyebrows and my name. If I’d been called Herbie Zerbe, I’d have been a comedian.”

Zerbe once revealed he wasn’t the first choice for the role of Teaspoon in The Young Riders. Another, very well-known TV actor was up for the part. No, he didn’t say who! That unnamed actor turned down the role because in the opening scene he would have to be filmed bathing in a horse’s water trough, and that wasn’t the image he wanted to portray. Not so with Zerbe. He owned it!

20. How Did You Really Feel About The Young Riders, Anthony?

In a 2012 interview with Cowboys & Indians (re-posted in May, 2020), Zerbe talked about his time on The Young Riders.

“…I loved playing Teaspoon. I would have done that show for another ten years. …We were all compatible…and it was really a good time with all these young kids.”

You can read the full interview here: https://www.cowboysindians.com/2020/05/happy-birthday-anthony-zerbe/ 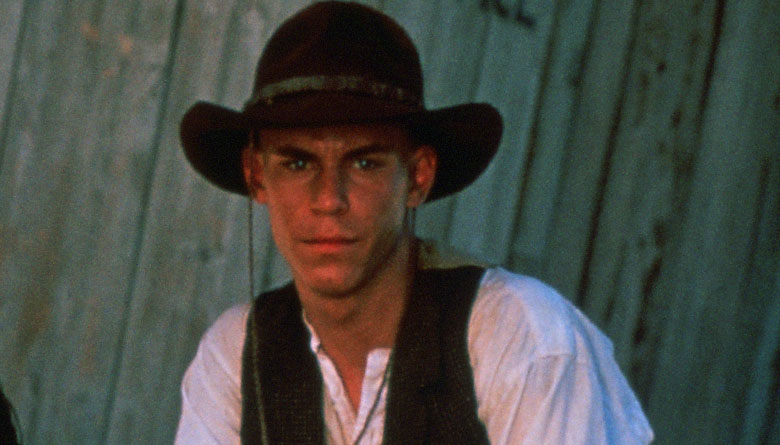 Fine started acting in plays when he was just 7-years-old, and made his screen debut at age 12, in A Time for Miracles, a 1980 movie about the first American saint. His famous co-star? Lorne Greene of Bonanza fame.

Though Fine had a successful acting career in TV and film after The Young Riders, most notably for roles in Girl, Interrupted and Child’s Play 3, he traded in his star status for wings! He trained as an airline pilot. In spite of an initial fear of flying, he was good at it, and became a professional commercial pilot in 2004.

23. Inspiration among the Clouds

So what do you do at 35,000 feet above the earth, cruising on autopilot? Why, get a brilliant idea for a screenplay, of course! Fine returned to Hollywood after writing and directing the award-winning film The Space Between.

Fine called upon the talents of his The Young Riders cast mates to star in his films. Melissa Leo (Emma on TYR) plays a cynical flight attendant, who, in the aftermath of the 9/11 attacks, aids a 10-year-old Pakistani-American prodigy in The Space Between.

Don Franklin (Noah on TYR) plays Lonnie in Any Day Now, the award-winning film co-written and directed by Fine, and produced by him and his wife, Kristine. 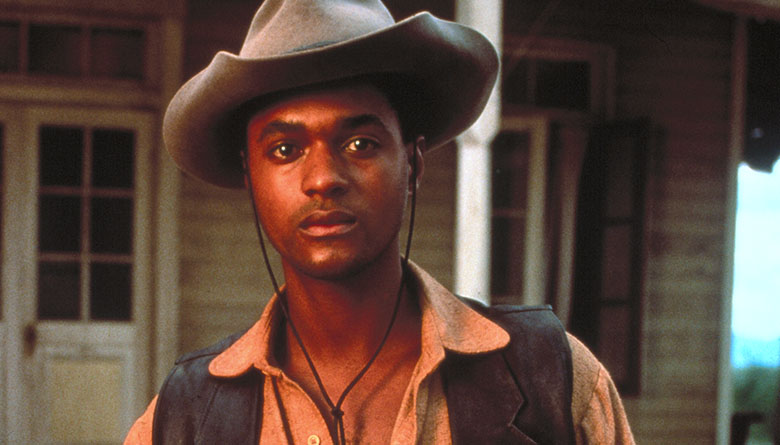 The multi-talented Don Franklin grew up in Chicago and began his entertainment career singing in choir and dancing, ballet and modern Jazz. He appeared with the Joseph Holmes Dance Theatre (Jazz) and the Chicago Ballet.

In 1986, Franklin landed a guest appearance on the then popular comedy, The Cosby Show. Then all the “right” people started noticing him, and doors began to open, including his co-starring role on The Young Riders. Since then, he’s worked steadily in TV. His credits are extensive and include roles on series, such as Insecure, Bosch, SEAL Team, Daybreak, Girlfriends, SeaQuest 2032, and guest appearances on NCIS Los Angeles, Glee, Bones, The Closer, and many others.

This city boy had never been on a horse before he got the part of Noah in The Young Riders. After signing onto the show, they sent him to “cowboy camp,” which was an intensive course in horsemanship: mounting, dismounting, roping and riding. 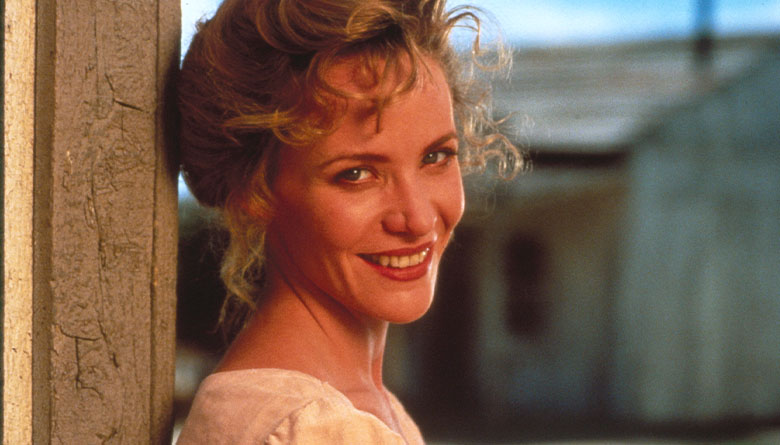 When Clare Wren was a girl, she competed in gymnastics. She was an intense competitor, but in her senior year of high school, she suffered a serious knee injury at a meet that required surgery. She spent her first year in college at Southern Methodist University in Texas on crutches.

After catching the acting bug in college, Wren headed to L.A. with only $50 to her name. Her parents thought the acting thing was just a phase, so she never even told them she was leaving! Wren contacted an old acquaintance, and slept on her floor until she could find work.

Wren was cast in a play in the Burt Reynolds Theater in Florida and the veteran actor, Reynolds, took her under his wing, always looking out for her. She appeared in three plays at the theater, and in between runs, her agent would call repeatedly with audition opportunities—thanks to Burt putting in a good word.

After her time on The Young Riders, Wren appeared in episodes of ER, NYPD Blue, and JAG, among other popular shows.

In the 1980s, the veteran actor and iconic cowboy, Don Collier was cast as a “gumfighter,” a gum-toting sheriff, blowing bubbles to beat the bad guys, in Wrigley’s Hubba Bubba Bubble Gum commercials. The campaign proved so popular, Collier played the character for eight years, earning $700,000.

Besides The Young Riders, you can see Collier in episodes of almost all your favorite INSP shows: Gunsmoke, How the West Was Won, The Virginian, Bonanza, and as Sam Butler, the ranch foreman on The High Chaparral, and more. Movie roles include: Duncan in Seven Ways from Sundown, Shack in The War Wagon, Deputy Joe Braddock in El Dorado and Goodyear in The Undefeated, plus appearances in The Sacketts, The Waltons: An Easter Story, Gunsmoke: To the Last Man and Gunsmoke: One Man’s Justice.

After being discharged from the U.S. Navy in 1946, Collier went to work as a ranch hand on popular European actor, Francis Lederer’s San Fernando Valley spread. 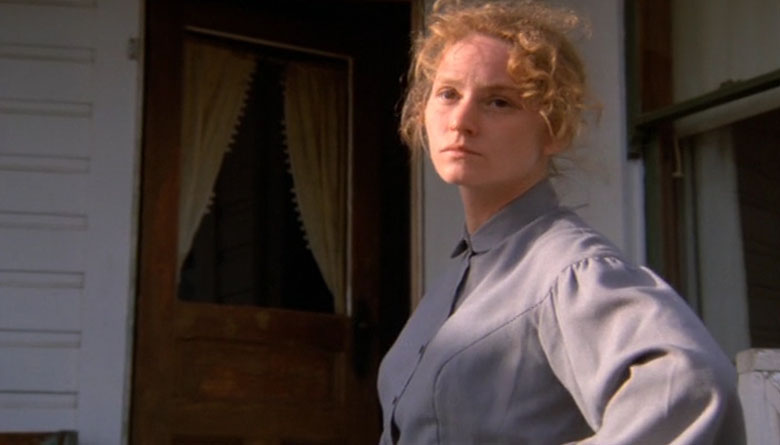 After Leo’s parents divorced, her mother moved her and her brother, Erik to a commune in Vermont.

About acting, Leo once said, “To get the hippie out of certain characters is probably the most difficult thing for me. I was not a hippie by choice, but by birth.”

Professional through and through, Leo’s extensive credits after The Young Riders include: Homicide: Life on the Street, CSI, Law & Order, Criminal Minds, Cold Case, Mildred Pierce, Treme, Wayward Pines, I Know This Much Is True, the voice of Diane’s mother on BoJack Horseman, just to name few of her TV parts. Her films include several shorts and features: The Space Between, Frozen River, 21 Grams, and The Fighter, for which she won the Best Supporting Actor Academy Award, plus several other notable films, and projects currently in production.

Both Melisa Leo and Julia Roberts auditioned for the part of Linda Warner on the daytime soap, All My Children. Leo won the role. Oh, the drama! 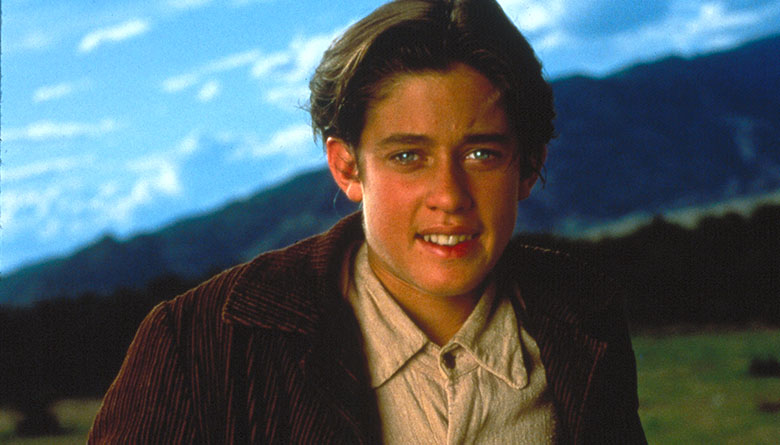 Christopher Pettiet competed in the Junior Olympics in snow skiing, and was also an avid surfer, reportedly owning a different board for each day of the week.

41. After The Young Riders

In 1991, Pettiet won the award for Best Young Artist Guest Starring in a Television Series, for his appearance as Gregory Pelzman on Doogie Howser, M.D.

In 1992, he was nominated for the Best Young Artist Co-Starring in a Television Series, for his role as Jesse James in The Young Riders.

Sadly, Christopher Pettiet died of an accidental overdose on April 12, 2000, two months after turning 24. His ashes were scattered at sea in Santa Monica, California. 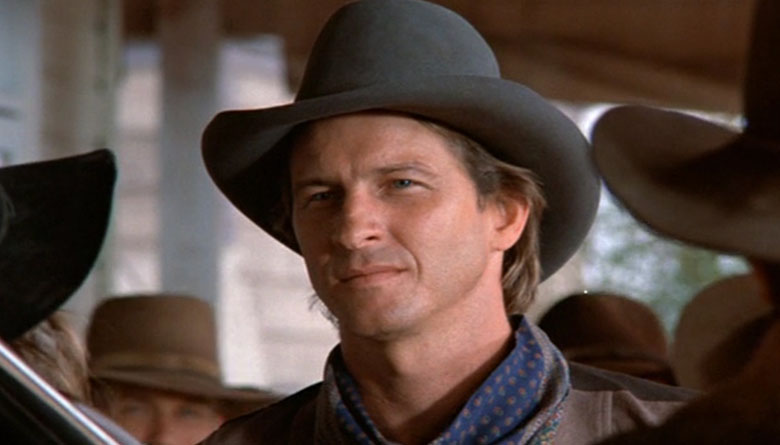 An avid golfer, Brett Cullen has played in many celebrity golf tournaments. But he loves the water as much as the green. He started surfing at age eight on the Gulf Coast of Texas.

He also used to compete in rodeo and played baseball until he was 20, when the theater lured him from the diamond to the stage.

We’d need an entire website just to list Cullen’s impressive credits. A sampling of his accomplishments include appearances on Justified, Ally McBeal, Walker, Texas Ranger, Without a Trace, recurring roles on The West Wing, NCIS, Ugly Betty, Friday Night Lights, Lost, Damages, Under the Dome, Person of Interest, True Detective, The Blacklist, Big Dogs, among many others.

Movies include Apollo 13, The Replacements, On Golden Pond, The Space Between, Faceless, Ghost Rider, The Dark Knight Rises, 42, Joker and more.

Cullen used to answer his fan mail online, and once commented that he loves doing Westerns, and would love to do a “Young Riders” movie. Who would like to see Sam and Emma together again? Yes! We’re raising our hands, too!

Ah, we can dream, can’t we? In the meantime catch The Young Riders Saturdays | 4PM ET