The Cowboys at Mid-Century
by Henry C. Parke

Growing up, we all wanted to be cowboys. We liked the 1953 Western classic, Shane, starring Alan Ladd and Jack Palance. But we didn’t look at Brandon de Wilde (who played the young Joey Starrett) and think, “Gee, I wish I could be a 10-year-old on the sidelines, watching Dad and Shane take on the bad guys.”

The Cowboys, on the other hand, was another world entirely—our world! Sure, in reality, we lived in a world of boring, endless chores, and schoolwork. But it 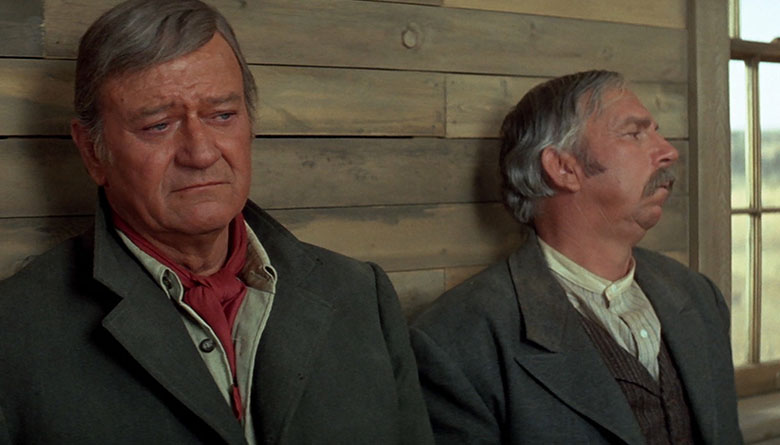 somehow seemed just possible that a man like Wil Andersen (played by the indomitable John Wayne) could stride into that world and announce that he’d give us the chance to be men, and to prove it—right now! Uncounted millions of boys—and men, who at heart, will always be boys—sat in dark theaters around the world, heard Wil Andersen’s proposition, an ached to go along. Truth is, many of us still do.

Mark Rydell, a Jewish kid from the Bronx, felt the same way. He started reading the not-yet-published novel by Robert Dale Jennings, and 40 pages in, he grabbed the phone and called his mother to borrow money for the option! But Rydell, director of such works as the 1969 film, The Reivers, along with 10 episodes of Gunsmoke, wanted George C. Scott for the film, not John Wayne. Rydell’s own left-wing politics had convinced him that he couldn’t work with the Duke. Just to placate Warner Brothers during casting, Rydell flew to Mexico, where Wayne was shooting Big Jake, ultimately saying, “I found him to be one of the nicest guys I ever met.” Thus, Scott was out, and Wayne was in.

Making The Cowboys would be an unforgettable experience for everyone involved. Matt Clark, who’s played memorable Western weasels in Will Penny and Monte Walsh, was delighted to be cast as the spokesman for the ranch-hands who abandon Wil Andersen for a gold strike, creating his need for hiring the boys. And like Rydell, Clark remembers, “I liked Wayne’s acting. But when he started to get really politically crazy, I turned off.”

The Vietnam War was still raging, and Lt. William Calley would be tried for the massacre of villagers in My Lai. Clark listened with disgust to a cadre of Wayne hangers-on about what a hero Calley was. When the Duke arrived on set, one of them asked what he thought about Calley. “And he said, ‘They ought to hang that murdering little coward up by his b***s.’ Everything went silent for a minute. Then they all went, ‘You got that right, Duke!’ I like Wayne a lot more after that.” 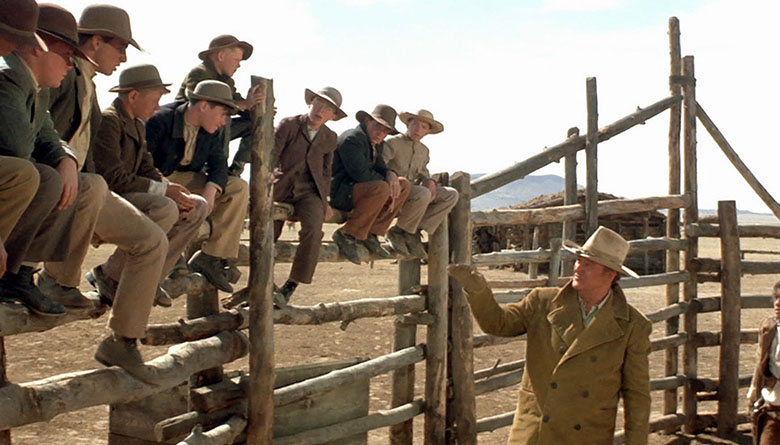 Casting the right 11 boys was a huge challenge. Stephen Audis, who plays Charlie Schwartz, remembers the auditions. “It was grueling. The first call-out, probably a thousand kids were seen. That was whittled down; the last callback was two choices for each character.” England-born Hudis had moved to America when his screenwriter father was lured to the U.S. to write for television. Even when Stephen was finally selected, “I was on hold because I’d just finished a pilot with Ernest Borgnine. But in the end, it all worked.”

The part of Slim was the first film role for Robert Carradine, of the legendary Carradine acting family. “I was living with my brother, David, and one day he says, ‘There’s a movie casting at Warner Brothers called “The Cowboys.” John Wayne hires these school kids to herd his cattle to market. You want to go in and meet him?’ I said, ‘No.'”

Although Robert was scared at the prospect, David convinced him: “he said I had everything to gain and nothing to lose. Okay.” His audition was the scene in the classroom, “and I had to read this ridiculous poem in front of the John Wayne character. I was as nervous as could be, and it worked perfectly: so that’s how I got it. Half the cowboys in that film were real cowboys. And the other half were actors.”

Hudis elaborates, “They lumped us all together: we’d help them with acting, and they’d help us with the horseback. Before we even set foot on location, we had eight weeks of intense riding training.”

Carradine remembers, “Under the watchful eye of Red Burns, you really learned how to sit a horse and throw a rope; and those are skills I’ve carried with me through many westerns.”

And they got pretty good with those ropes. Stuntman Walter Scott recalls with a laugh, “Those little b******s would hide behind the corner of the hotel and rope you. And we said, ‘I’ll cut your rope if you rope me.’ So, we cut a couple of their ropes, and they cut that s*** out.”

In the touching scene just before the cattle drive starts, where the boys’ parents see them off, most were genuine mothers playing themselves. That’s because, by law, each minor child had to have an adult guardian on the set. Only A Martinez was 21 and, Carradine remembers, “We got along great. We came up with a scheme that A Martinez would be my guardian, so David got out of having to be on set for three months.”

The wonderfully evil Bruce Darn had graduated from villains to leads when they made him an offer he couldn’t refuse: the chance to kill John Wayne. It’s an unforgettable performance, especially when he terrorizes Nicolas Beauvy, the boy with glasses, to not tell Wayne that they’re being followed. Darn remembers, “Mark (Rydell) had said, ‘Just get his attention.” The scene in the river—I start dunking him up and down, his glasses come off, he’s swallowing water—that’s not in the script.” More startling are the things Dern said, unheard by the audience when the camera was just on Beauvy. “I’m going to creep to you at night, and cut your tongue off, and sew it on the side of your face, so we can all see it flapping when you tell somebody something you’re not supposed to.”

Incredibly, Beauvy remembers Darn fondly. “I was a real big sports fan and so was he, so even after the movie finished, he’d invite me to Lakers games. He was a great guy.” 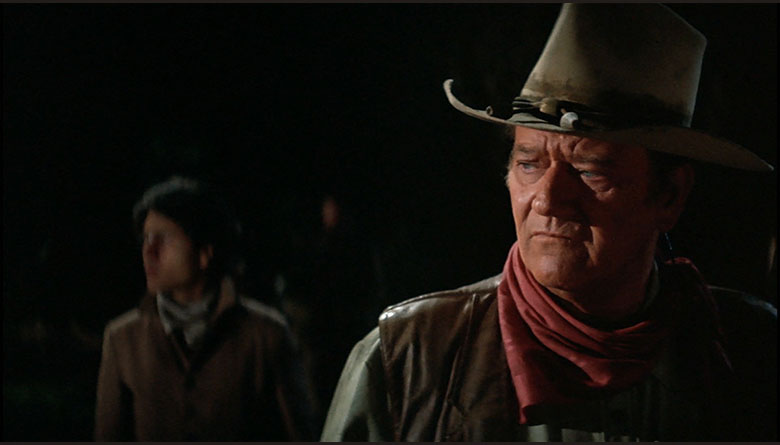 Not surprisingly, the strongest memories of the cast and crew are those of John Wayne, the man. They all recall his heroic determination, doing his own riding and most of his own stunts, working in high-altitude conditions, with a lung-and-a-half lost to cancer.

Scott remembers Wayne straightening out the assistant director who’d given him too-preferential treatment. “When those men have a 6 o’clock call, I have a 6 o’clock call, not 7:30: I’m here at the same time as them.” Carradine remembers, after the wrap party, waiting on a long line to get Wayne to sign an 8×10. “He’s about to put the pen to paper and he looks at me. He goes, ‘Carradine, you stupid son-of-a-b****, I just made a picture with you!” and gave it back unsigned, which I took as a compliment; that we’re colleagues.”

Hudis remembers shooting the scene where all the boys prove their worth by riding Crazy Alice. “Sure enough, I went a** over tea kettle, landed face first in the dirt. Scared the living bejeezus out of me. I started to cry and just ran into his arms, to comfort me, like an old teddy bear. He said, ‘Steve, look at it this way. You stepped in horses***, and you’ve been thrown off a horse. Congratulations: now you’re a cowboy.”

Whatever Happened to The Cowboys?
by Henry C. Parke

Yes, where are those greenhorn lads who had to grow up fast to keep up with John Wayne as the aging rancher, Will Andersen? In a few cases, the answers are obvious. Here’s an update on where “The Cowboys” are now, featuring the actors (or non-actors, in the case of the “rodeo kids”), the roles they once played in The Cowboys, and what they’re up to these days.

A Martinez (Cimarron) has acted steadily ever since the 1972 hit, including numerous daytime dramas, the miniseries Centennial, six seasons as Jacob Nighthorse on Longmire, and recently as Brick McCree in the film, Christmas on the Range.

Robert Carradine (Slim Honeycutt) has also been highly visible, starring in films as varied as Coming Home, Revenge of the Nerds, and Westerns like The Long Riders and Monte Walsh.

Nicolas Beauty (Dan) played his last film role in 1979’s Diary of a Teenage Hitchhiker and is now a successful realtor.

Sean Kelly (Stuttering Bob) continued to act on television, his last guest role on a 1983 episode of Quincy. Today, he is an intuitive and trance channeling consultant.

Alfred Barker Jr. (Fats) continued with rodeo and would serve with the Riverside County Sheriff’s Department for 35 years. He’s now a member of the National Police Rodeo Association.

Steve Benedict (Steve) would act on television until 1979’s TV movie Friendly Fire, which won four Emmys. He then became a stockbroker for a time, and is now a contractor, building custom homes.

Norman Howell (Weedy), one of the rodeo kids, kept acting, but soon decided he enjoyed stunt work even more. He’s doubled for Roger Moore in his James Bond films, and for Kevin Costner, who gave him his big break as stunt coordinator on Dances with Wolves. Howell recently won two Stunt Coordinator Emmys for Brooklyn Nine Nine.

Stephen Hudis (Charlie Schwartz) gravitated more toward the stunt kids than the actors, and after rodeoing, became a stuntman. Graduating to stunt coordinator with 1988’s Pushed Too Far, he’s doubled for Eric Roberts, Kris Kristofferson, and L.Q. Jones among many others.

Mike Pyeatt (Homer Weems), a rodeo kid, went right back into rodeo after his one movie and has had a successful career. He’s now superintendent at Naval Air Station Lemoore.

Clay O’Brien (Hardy Fimps), Sam’s younger brother, would go on to play Fess Parker‘s son in Climb an Angry Mountain, John Wayne’s son in Cahill U.S. Marshal, and Roy Rogers‘ young sidekick in the exceptional Mackintosh and T.J. But he became so fed up with not getting a day off from filming to compete in rodeo finals that he quit acting entirely and returned to rodeoing full time. He has won The Team Roping World Championships seven times.