James Arness is back as Marshall Matt Dillon in this final Gunsmoke adventure. When a young mother is killed following a botched stagecoach robbery, her son sets out to find her killers. Can Dillon get to him before he ends up dead too?

It started in 1952 as one of the country’s best adult Western radio shows, and continued that way until it became a television show in 1955. Gunsmoke then went on for 20 more years, airing an incredible 635 episodes, ranking #1 in the ratings for four consecutive years, and solidified its place in history as the longest running primetime show of all time. 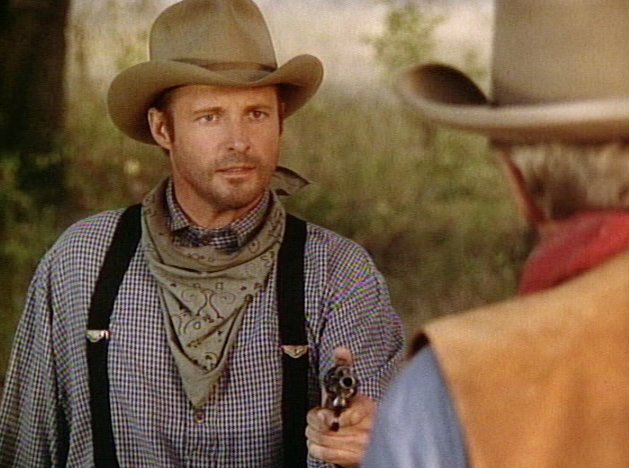 To the delight of devoted fans everywhere, James Arness got back in the saddle to play Matt Dillon in a series of Gunsmoke movies. Gunsmoke: One Man’s Justice stars James Arness, Bruce Boxleitner, and Amy Stoch, and marks the final appearance by Arness as Marshall Matt Dillon.

When a stagecoach robbery gets botched, three victims are shot and wounded: a traveling salesman, a widowed mother of two young boys, and the son-in-law of retired Marshal Matt Dillon. Dillon offers the wounded passengers refuge in his nearby home.

Later that night, the young mother dies—and her older son, Lucas, decides to avenge her death. With no preparation and even less planning, he runs off into the night to try and hunt down the ruthless gang that killed his mother.

Early the next morning, Dillon learns of the teen’s foolhardy plan and immediately sets out after him. Davis Healy—the traveling salesman—offers to help, and Dillon accepts. It’s going to be a long trek to find the teenager, but if they don’t get to him before he gets to the murderers, he could just end up dead.

Now, desperadoes of every stripe are on the loose, and the bullets are flying, as Dillon and Healy rush headlong towards danger. Along the long and dusty road, Dillon realizes that Healy is a great shot…and he might just be hiding some secrets that make him a less than perfect partner.

Gunsmoke: One Man’s Justice is just what the diehard fan ordered: a quality drama filled with twists and turns—and James Arness in the role he was born to play.