Who can ride a bull and jump from a helicopter onto the wing of a plane—in midair? Who can withstand a helicopter rocket attack, followed by an accident where his truck rolls over repeatedly and he escapes with nary a scratch? Who can shoot down the helicopter attacker and—Kick! Bam! Slam!—the villain into submission? Who? Walker, Texas Ranger, that’s who!

Get ready for some karate-kicking, car-chasing, bar-brawling, explosive action! Martial Arts champion and actor, Chuck Norris is Sgt. Cordell Walker, a Texas Ranger who likes to fight the bad guys the old fashioned way, more like the old west than with the gadgets and gizmos of modern technology—with a swift kick and powerful punch! 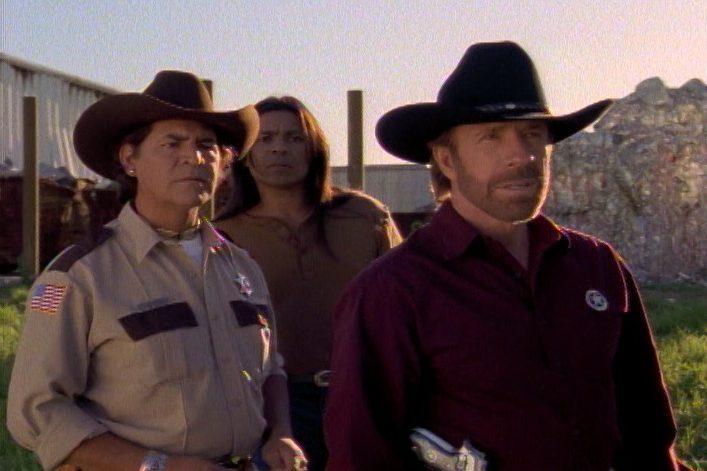 of high moral values, Walker fights crime and injustice in Dallas, Texas. Even in his off-duty hours he gives back to the community by teaching Karate to inner city kids, hoping to instill in them a foundation based on character, strength, spirituality and self-worth, with the goal of keeping them out of the gangs.

INSP cross-over alert! Matlock fans will recognize Clarence Gilyard as Ranger Sgt. Jimmy Trivette, Walker’s partner. Former NFL star and accomplished martial artist, Jimmy is a little less “high noon,” and more “high tech” when it comes to fighting crime. But he’s got plenty of good moves and when he and Walker are on a case, gangbangers, drug dealers, bank robbers and other crooks won’t know what hit them.

Sometimes the boys need a break from all this exhilarating action, so you’ll find them chowing down on the chili at C.D.’s Bar and Grill, owned by retired Texas Ranger and Walker’s former partner C.D. Parker. Parker is the only one who ever calls Walker by his first name! Though Parker is no longer a Ranger, Walker, often consults with him on cases.

And who says a man who can land a heel to your forehead doesn’t have a soft side? Assistant District Attorney, Alexandra Cahill, most certainly has caught this tough guy’s eye.

Get in on the action! From car chases to roundhouse kicks, all wrapped up in a good moral message, the stuff is going down right here on INSP!

WARNING: THE UNAUTHORIZED REPRODUCTION OR DISTRIBUTION OF THIS COPYRIGHTED WORK IS ILLEGAL

AND MAY BE PROSECUTED UNDER CRIMINAL OR CIVIL LAW.

Which INSP Family Should You Spend Thanksgiving With?

When bad guys are in town, Cordell Walker kicks it into high gear! Watch Chuck Norris in action in Walker, Texas Ranger, weekdays at... READ MORE