A brand new Texas Ranger must bring a notorious outlaw to justice. It’s going to take all of his wits and courage to do it—especially since his prisoner always seems to be two steps ahead of him….

Stars Audie Murphy and Barry Sullivan. A novice Texas Ranger must bring a curiously charming outlaw to justice in this Western where a wily outlaw always seems to be two steps ahead of the law.

“Seven Ways From Sundown” Jones is a brand new Texas Ranger with a funny name (his daddy gave all the kids numbers for names, while his mama added the extra words to spice them up). His older brother, Two, was also a Ranger, but he died in the line of duty. Now Seven has a big first assignment: he’s partnered with veteran officer Sergeant Hennessey to bring Jim Flood, a notorious outlaw, back to justice. Hennessey is a kind older man who takes the time to teach Seven how to use his revolver and offers sharpshooting tips along the dangerous path towards Flood.

As the two close in on the outlaw, they meet a barmaid who sends her undying love to him and a young boy who has been mesmerized by Flood’s tales of glory and generosity. Seven soon realizes that Hennessey respects Flood, which the good Sergeant does not deny. He tells Seven that he knew Flood when they were young, and he will not judge him. 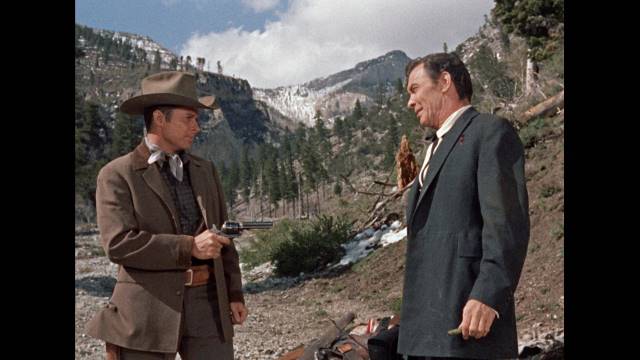 A short time later, the duo spot Flood on the trail. They close in on him when Flood shoots, hitting Hennessey. As the Sergeant dies in Seven’s arms, he begs him not to try to capture Flood alone…but he knows that Seven will surely ignore his warning.

Soon after, Seven overtakes Flood and shoots him in the arm. When Seven gets to him, Flood pleasantly asks to be taken to a nearby cabin before fainting. Once revived, the two begin an unlikely friendship, Seven can’t help but admire his bravery and brains, and he finally understands how Flood has eluded capture all of these years. Plus, it’s obvious that Flood could easily overpower Seven and take off, if he wanted to.

It’s a long way from these Texas hills back to New Mexico, with Apaches, bounty hunters, and Flood’s legion of admiring friends and fans in his path. Now Seven wonders: will capturing this long-wanted gunman be the only easy part of this perilous journey—and will justice prevail?