Shortly before a cattle drive, rancher, Wil Anderson’s cowhands quit to try and strike it rich in the gold mines. Now he must turn a group of schoolboys into cowboys fast, because rustlers are on their tail.

Saddle up for the ride of your life! This classic Western stars John Wayne, Bruce Dern, Colleen Dewhurst, Robert Carradine, Slim Pickens and other Western favorites.

Montana rancher, Wil Anderson is preparing for a 400-mile cattle drive. He has a crew of experienced cowboys ready to move the herd. Then word that fortunes could be made digging for gold starts making its way among the men. Gold Rush fever hits them hard, and they take off with the hopes of getting rich quick. Their abrupt departure leaves Wil in a bind. A friend suggests Wil go to Bozeman and recruit a crew from among the boys attending school there. Reluctantly, Wil takes his advice and rides into the now deserted town, but upon meeting the boys, he decides they’re way too green to make the long drive. Without cowhands, he can’t get his large herd to market. 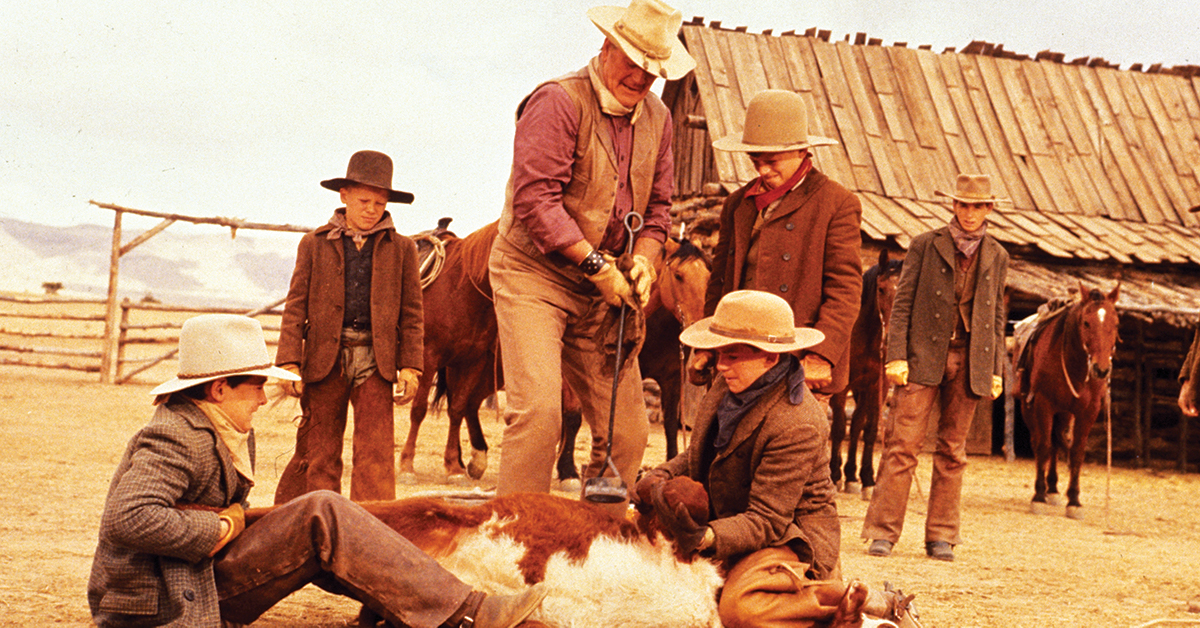 The next morning, a group of the boys ride up to Wil’s ranch. They want to work, to be part of the drive. Still not convinced of their abilities, he tests them to see if they can ride a bucking horse. He’s surprised to see they do well. Then Cimarron, another boy from the school arrives, and he wants to take the test. He is a little older than the others, and takes a different approach to riding out the bucks. He approaches the horse calmly, gains its trust. Once in the saddle, the horse doesn’t buck or shy. It performs as if it is a seasoned, well-broke cow horse. Wil is impressed, but when Cimarron get into a scuffle with the oldest of the group, exposing his short fuse, Wil sends Cimarron on his way, even though he would be a great asset to the team.

Though he has misgivings, Wil hires the kids. With the addition of Jeb Nightlinger, a camp cook, Wil’s trail team is complete. Now, all he has to do is turn these naïve schoolboys into wizened cowboys. In his tough-love style, Wil teaches the boys to rope, brand and herd cattle and horses. As they take off on the drive, Wil notices that Cimarron is riding at a distance. He is concerned that the boy is out to make trouble, perhaps seek revenge, but when a life or death situation arises, Cimarron proves his worth, and Wil allows him to continue with the crew. Along the way, the boys begin to excel at their skills, and both Wil and Jeb are pleased and impressed. But boys will be boys, and they also manage to get into more than their share of mischief, trying Wil’s patience in his newfound, and largely unwelcome, paternal role.

Soon Wil learns that training the boys and keeping them in line are the least of his problems. A band of ruthless rustlers plan an attack, doing whatever is necessary to steal Wil’s herd, even killing Wil and the boys.