The Good, The Bad, and The Good-Hearted Bad Guy
By Henry C. Parke

Bert Lahr once complained that, “After The Wizard of Oz I was typecast as a lion, and there aren’t all that many parts for lions.”

But in the days when all of the TV networks and movie studios were producing Westerns en masse, being typecast as a hero or a villain could be very lucrative. But some actors, even top stars, were eager to change their screen personas. 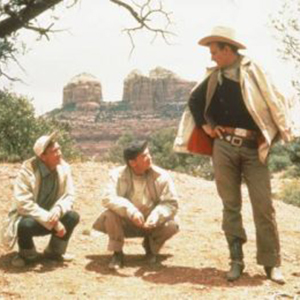 No other American actor has had a career to compare to John Wayne’s. From The Big Trail (1930) to The Shootist (1976), he was the star of every movie he was in, and he defined our image of the Westerner, and the world’s image of the American. But his image changed as he matured, and he was willing to take on less sympathetic roles. From being good as gold, by 1947’s Angel and the Badman, he was a bad man, but capable of reform. A year later, in Howard Hawk’s Red River, he was so unyielding in his treatment of young Montgomery Clift that only Walter Brennan could consider him a good guy – and only part of the time at that. In John Ford’s The Searchers (1956), where he sets out to rescue his niece kidnapped by Indians, he’s so full of rage that you fear what he’ll do if he does catch up to her.

But Wayne is not unique in the hardening of his persona. James Stewart was always that charming “Aw shucks,” guy in Frank Capra comedies, and in his only pre-war Western, Destry Rides Again (1939). But when he came back from the war, as a Brigadier General in the Army Air Forces, director Anthony Mann saw a potential toughness that was not cute at all. Their five Westerns together, Winchester 73 (1950), Bend of the River (1952), The Naked Spur (1953), The Far Country (1954) and The Man from Laramie (1955), gave us a manipulative bounty hunter, and a string of vengeful characters who, while ultimately in the right, were no one you’d want to sit around the campfire with. 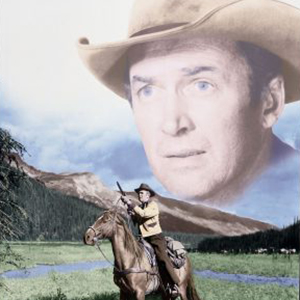 Of course, not every star changed from a white hat to a black – or even a grey one. Joel McCrea’s decency and nobility never wavered, from Howard Hawks’ Barbary Coast (1935) to Sam Peckinpah’s Ride the High Country (1962). McCrea’s co-star in High Country, Randolph Scott, played more varied heroes as his career went on, but likewise always remained the good guy.

To stretch themselves as actors, some stars had one-off characterizations that would make your jaw drop. Glenn Ford was Mr. Likable most of his career; but in The man from Colorado (1948), he comes back from the Civil War with a homicidal screw loose. Henry Fonda was such a noble truth-teller that, apart from his Custer portrait in Fort Apache (1948), his halo never slipped for decades. That’s precisely why Spaghetti Western maestro Sergio Leone cast him in Once Upon a Time in the West (1968). He knew that it would blow the audiences’ collective mind when a group of five cloaked men appear out of the brush and, without a word, slaughter a family, only to have the camera come around and reveal that the leader is Henry Fonda! 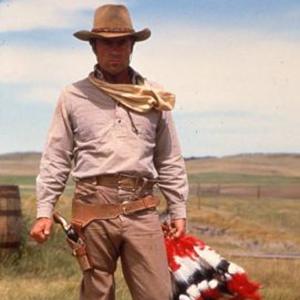 No one in a Western ever said, “Good news! Jack Palance is coming on the noon stage!” From his first Western, Shane (1953) onward, Jack Palance’s taunting, cruel visage never changed; he even won an Oscar when he played his menace for laughs in City Slickers (1991).

The villainous fraternity that populated TV Westerns starting in the fifties, referred to collectively by one of its members, Strother Martin, as “prairie scum,” rarely changed. Martin’s frequent co-scum, L.Q. Jones, when not the likable cowhand on The Virginian, was consistently hateful, and loved it.

He told me about his favorite Gunsmoke episode. “I was a terrible person. I literally kicked dogs. I beat kids. I chased women, I drank; everything you could do. They showed it on a Sunday. That Monday I had about a forty-five minute trip to the studio, driving my MG (with) the top down. I was booed and hissed, and they were throwing things for the entire thirty miles. It was great fun!”

Being unpopular doesn’t bother Bruce Dern who, in spite of a fifty year gap, is as hateful in The Hateful 8 as he was in The Big Valley. Similarly Morgan Woodward, who played likable Shotgun Gibbs in 81 episodes of Wyatt Earp before turning mean, has no qualms about picking on the Cartwrights, Barkleys, Boones, Cannons or Garths. He shared with me one of his secret intimidators: “I don’t blink on camera.”

But not so, Lee Van Cleef. As rotten as the others ever since High Noon (1952), he went to Spain in 1965 to star opposite Clint Eastwood in For a Few Dollars More, and transformed himself into a hero with a string of Spaghetti Westerns like The Big Gundown (1966) and The Grand Duel (1972), and he was a good guy for the rest of his career. 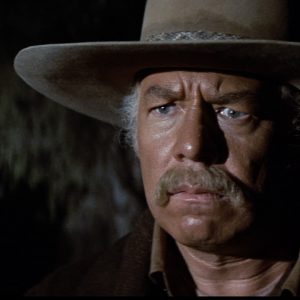 Jack Elam who, like Van Cleef, entered film not as an actor but as an accountant, is remembered for his broad and creepy characters as much as his unmoving left eye. Then Burt Kennedy cast him in Support Your Local Sheriff (1969), and showed the world Jack could be funny. Overnight he had a whole new image and career as a lovable Western comic eccentric.

George Kennedy was Hollywood’s go-to sadist and racist for years until in 1968 when he, like Lee Van Cleef, went to Spain, in his case to star in Guns of the Magnificent Seven, inarguably the best of the three sequels. You’d guess he was there to play the villain, but that job went to the wonderfully wicked Michael Ansara. No, incredibly George was cast in the saintly Yul Brynner role of Chris! He did it very well, and it might have meant a new career, but then went back stateside, and back to being a terrible person. And when they decided to make one last Magnificent Seven sequel, who did he hand over the role of Chris to? Lee Van Cleef!

Henry C. Parke didn’t expect to be a Western specialist, but then, neither did fellow Brooklyn native Billy the Kid.  Parke has written “Henry’s Western Round-up.” (www.henryswesternroundup.blogspot.com), the bi-monthly online report on Western film and TV production, for over six years, and for nearly a year has been Film Editor for True West Magazine.  He’s the first writer welcomed into the Western Writers of America strictly for his work in electronic media.  A screenwriter, his credits include Speedtrap (1977) and Double Cross (1994), and he’s got a saddle-bag full of Western scripts.