During the Yukon Gold Rush, cowboys Jeff Webster and Ben Tatum, head north and strike it rich. Then they run afoul of a corrupt judge who will do anything to keep the men from ever seeing their gold.

Hang onto the edge of your seat for a gripping and inspiring story filled with danger and adventure in the Great Northwest! Stars INSP fan favorite, James Stewart, with Walter Brennan and Harry Morgan.

The Klondike Gold Rush of 1896 inspires cowboy, Jeff Webster to try his luck at striking it rich—with beef. Though a confirmed loner, Webster teams up with his only friend, fellow cowboy, Ben Tatum, and the two set out driving a herd of cattle from Wyoming,  to the rugged, Yukon frontier town of Dawson, where beef is in high demand, and the duo will earn top dollar.

The journey is treacherous, but Webster is single-minded, and nothing will get in his way. Get the money to buy a small ranch, and get out is his plan, but his plan is about to go terribly awry. They survive the trek, and the ship crossing to the northern town of Skagway, where they are to prepare for the perilous drive through the mountains to Canada, and on to the Yukon. But in Skagway, Webster and Tatum encounter a danger more frightening than nature: the smooth-talking and corrupt, judge Gannon. 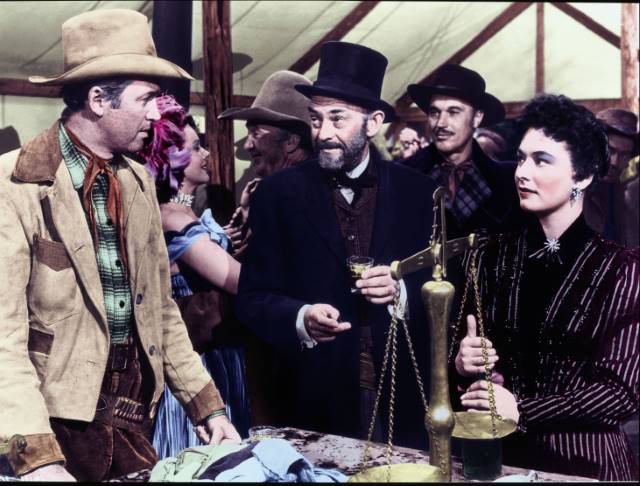 Upon arriving in Skagway, the cowboys unload the cattle. Gannon, in the process of conducting a public hanging, charges Webster with criminal disorderly conduct for interrupting the lynching, and he throws him in jail. Gannon dismisses the case, but confiscates Webster’s herd for his own financial gain. Webster doesn’t like losing. He and Tatum steal the cattle back, and go on the run, with the herd toward the lawless town of Dawson, Gannon and his men on their tail.

Now, Webster is trapped. Gannon has arrived, and even if Webster could leave the town, he won’t be able to get back to the States without crossing through Gannon-dominated Skagway. Though Gannon seeks revenge, he also sees opportunity, and he begins scamming Dawson residents out of their goldmine claims. Webster is not one to fight for anyone but himself, but when Gannon’s men commit a heinous act that hits close to home, Webster must decide: take a stand, or continue to live, like everyone else in Dawson, under the thumb of Gannon.

How well do you know these INSP fan favorite cowboys, who just happen to share May birthdays? Let’s find out! It’s... READ MORE