Repentant outlaw, Glyn McLyntock, leads a wagon train to Oregon. Their supplies are stolen as winter approaches, and the settlers won’t survive—unless McLyntock can take back what’s theirs.

Former border raider, Glyn McLyntock is trying to put his past behind him, so he agrees to scout for a wagon train of pioneers on their way to the wilds of Oregon, where he, too, hopes to start a new life. He just may have his fresh start with one particularly attractive young lady, Laurie Baile, the daughter of Jeremy Baile who is the leader of the group of settlers. 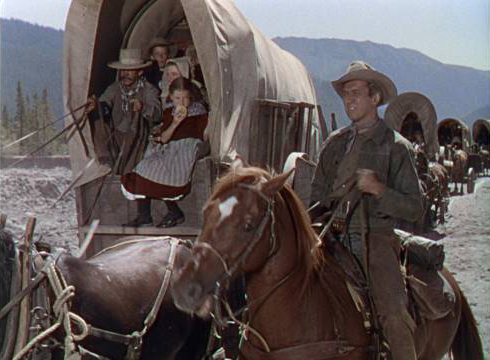 One day, while riding ahead on the trail, McLyntock comes upon Emerson Cole, about to be lynched for stealing a horse. McLyntock rescues Cole from his assailants, and feeling indebted, Cole camps out with the wagon train for the night. Under the cover of darkness, a band of Shoshone Indians attacks the camp, and Laurie is wounded by an arrow. McLyntock and Cole go after the Indians, and in the scuffle, Cole saves McLyntock’s life. Now they are even, and a friendship based on mutual respect and trust begins to form. Cole decides to stay with the wagon train against Jeremy Baile’s wishes, as he is wary of Cole’s intentions, and he doesn’t believe a man can change. Once an outlaw, always an outlaw is his way of thinking.

When the settlers arrive in Portland, Jeremy contacts a merchant, and spends all their pooled money to order the essential supplies that will get the families through the winter on their homesteads in the wilderness. The items are to be delivered to them by steamboat owner Tom Hendricks in a few months when the shipment is expected to get to town. Laurie stays behind to recuperate from her injuries, as the others head off to stake out their land, build houses and barns and prepare for the coming cold weather. Cole, too, leaves the wagon train, intending to seek his fortune in the gold rush and at the gambling tables.

Now months have passed, winter is fast approaching, and Jeremy hasn’t heard a word from his daughter, nor have they received any confirmation that their order has arrived in Portland. McLyntock and Jeremy head back to town to see what is holding up their shipment. Without food and other supplies, the entire community will starve. When they arrive in Portland, they learn that Hendricks has sold their purchases to a group of gold miners who were willing to pay a much higher price. To make matters worse, Cole and Laurie are now working for the double-crossing Hendricks. McLyntock is particularly displeased to discover the duo seems to be romantically involved, and Laurie has no intention of joining her father’s settlement.

Cole decides to help McLyntock recover the settlers’ goods. He puts together a band of raiders, including Trey Wilson a handsome, affable gambler, McLyntock, Jeremy and Laurie, and they set out to take back what’s rightfully theirs. One step ahead of Hendricks and his ruthless gang, McLyntock will discover there’s a traitor in his midst and now he must fight enemies on all fronts.