Stars John Wayne, Henry Fonda, and Shirley Temple! A wise veteran commander is duty-bound to support his young, glory-seeking commander…even if it leads to a disastrous and deadly Indian war.

A demoted Civil War general, Lieutenant Colonel Owen Thursday, has been reassigned to command a far-flung outpost in Arizona named Fort Apache. The widowed commander reports for duty and brings along his daughter, Philadelphia.

Upon Commander Thursday’s arrival, Captain Sam Collingwood, the former commander of the fort; and his second in command, Captain Kirby York brief Thursday on the situation with the Apache Indians.

In his exacting and unimaginative way, Commander Thursday grills the pair about the Indian threat and dismisses it. Despite his combat experience, Thursday is an East coast glory-seeker who lacks knowledge about Apache culture, traditions, or war capabilities. 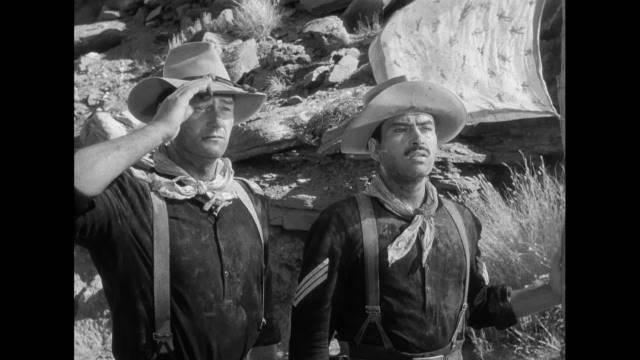 Captain York, a veteran soldier with years of experience dealing with the Apaches (including their leader, Cochise), tries his best to get his young commander to see that the threat is very real.

Meanwhile, the commander’s daughter, Philadelphia, and a young soldier named Second Lieutenant Michael Shannon O’Rourke (the son of an uncommissioned soldier), meet and are attracted to each other. Michael takes Philadelphia out riding the next day, and along the way, they find the bodies of massacred soldiers.

They race back to the fort, and Michael gives a detailed report to Commander Thursday. Although he thanks the young man, Thursday sends him off with a small detail of men to retrieve the bodies…and tells him never to see his daughter again. Thursday tells his daughter the same thing, and forbids her to marry a man below their station.

Using this event as an excuse to incite trouble, Thursday starts escalating fights with the Apaches. The situation deteriorates and Captain York fears they may be in for an all-out war. But despite the warnings, it’s clear that Thursday wants to make a name for himself against the Apaches – no matter what the consequences.

The stakes could not be higher. As a soldier, York is honor-bound to follow his Commander into all battles. Even those that lead to disaster – and death…