James Garner stars in this hilarious Western. When an easy-going stranger becomes the newest Sheriff, his law and order ideas anger a murderous clan. Now this local Sheriff needs any support he can find!

Jason McCoullough has no intentions of sticking around. He’s on his way to Australia (so he says constantly), and he’s just passing through. While in the local saloon, McCullough sees a man (Joe Danby) shoot another man in cold blood. Since Jason doesn’t have any money—and the rate of inflation in this gold rush town is so high—he goes to the mayor and town council and shows them his impressive shooting skills. Now, Jason is hired to be the Sheriff. 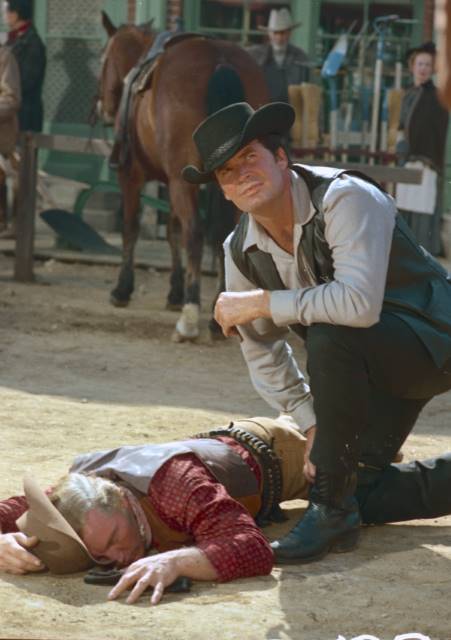 Jason’s first order of business is breaking up a brawl, and then arresting Joe Danby. Nobody can believe he’ll actually do it, since the Danbys are a bunch of murderous bandits who hold the town firmly in their grip. But with the help of the “town character” Jake, Jason does it anyway, and he gets Jake as a reluctant deputy sheriff while he’s at it. Jason even manages to keep Joe under lock and key in the new town jail—even though it doesn’t have bars on the prison cells yet.

As if Jason doesn’t have enough to worry about, there’s the little matter of the mayor’s oddball daughter, Prudy Perkins. She is a klutz and a fireball (sometimes, literally), and she’s also the richest woman in town. You see, it was Prudy who found the first pile of gold in an open grave during a funeral. The pair hit it off in the most awkward way, with each one suggesting to the other that Jason really should go to Australia, and the sooner, the better.

Which sounds like a really good idea…since the Danby clan has employed a slew of hired guns to murder the new local sheriff. It’s considered a done deal by the rest of the town, and they cheerfully refuse to help Jason in any way. Which leaves him with a hotheaded klutz, the town character, and possibly Joe Danby as his only defenses.