With his slight build, soft voice, and sweet, round boyish face, Audie Murphy’s unassuming demeanor was hardly the standard picture of a war hero—or a Western movie star. But Audie was exactly that, brave, rugged, and just, but with a humble heart.

“I can’t ever remember being young in my life,” Audie once said, and he had good reason to feel that way. His life prior to World War II and Hollywood was one of poverty and neglect. As a young boy, he shouldered responsibilities that would burden adults twice his age.

Born Audie Leon Murphy on June 20, 1924 to sharecropper Emmett Berry Murphy and Josie Bell Killian in Kingston, Texas, he was the seventh of twelve children. As a boy, Audie was shy, a loner and given to bursts of temper and radical mood swings. His father drifted in and out of their lives, and finally, abandoned them altogether. At just 10 years old, a fifth grader, Audie left school to help support his mother and siblings. He worked picking cotton, earning one dollar a day for his effort. The income helped, but feeding 11 brothers and sisters and his mother was a challenge. In order to put food on the table, Audie learned to hunt. Little did he know, his accuracy with a rifle would serve him well when the rumblings of war called him to the front lines. As the war advanced in Europe, he followed the news and was eager to get into the fight, but tragedy was about to strike much closer to home.

For years, Audie worked hard to support his family, and he was devoted to his mother, Josie Bell. In 1941, his beloved mother, passed away from pneumonia and heart failure. An older married sister wasn’t able to care for all the kids. Devastated, Audie watched as three of his youngest siblings were taken from the Murphy home and placed in a Christian orphanage. The others, old enough to get along on their own, went their separate ways. The loss of his mother hit Audie so deep, it plagued him for the rest of his life.

“She died when I was sixteen. She had the most beautiful hair I’ve ever seen. It reached almost to the floor,” he said, later in life, “She rarely talked, and always seemed to be searching for something. What it was I don’t know. We didn’t discuss our feelings. But when she passed away, she took something of me with her. It seems I’ve been searching for it ever since.”

Now, on his own, Audie moved into a boarding house and found work at a radio repair shop and a gas station that doubled as a general store, but he still dreamed of getting into the action overseas. When the Japanese attacked Pearl Harbor, he was determined, more than ever, to join The Marines, but he didn’t meet their weight and height requirements. Nor did the Paratroopers or Navy feel he was fighting material. Reluctantly, he decided to enlist in the U.S. Army, and even if he had a birth certificate, he would have been turned away, as he was underage. Desperate, he convinced his older sister to sign an affidavit stating he was a year older than his actual age, and soon he was off to boot camp, but with the intention of transferring to a more prestigious branch of the military. He set his sights on, eventually, becoming a glider pilot.

The March to War

Any notion of the U.S. Army being beneath him, or the “easy way out,” was soon dispelled. During his very first close-order drill session, he fainted, flat-out cold. As if that wasn’t humiliation enough, he immediately gained the nickname, “baby,” and his commanding officer, thinking he would spare the clearly unsuitable recruit any further embarrassment, offered to send Audie to train as a cook rather than as a combat soldier. Stubborn to the core, Audie persisted and his C.O. finally relented, allowing him to retain his combat classification. It was the smartest decision that 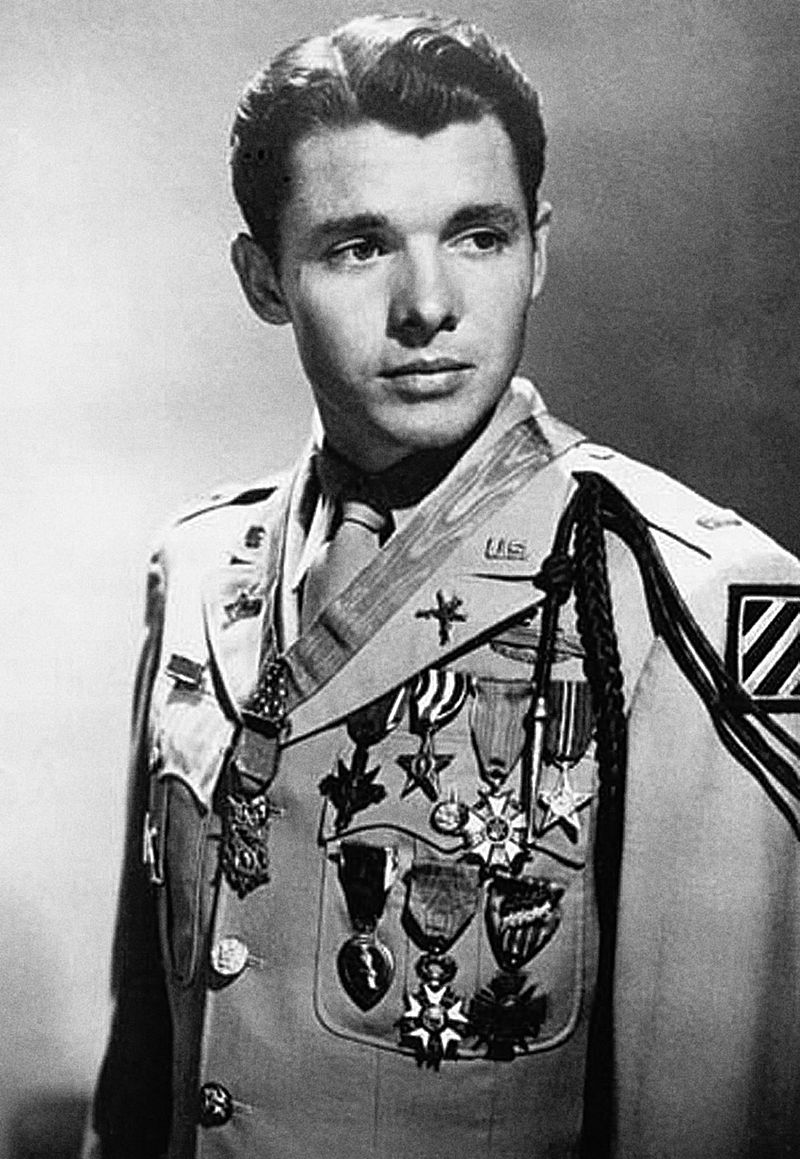 C.O. made because Audie proved himself to be brave, fierce, a strategic thinker, a skillful sharpshooter, and a born leader.

One of his fellow United States Army Officers said of Murphy, “Don’t let that baby face fool you, that’s the toughest soldier in the Third Division.”

Indeed, he fought fiercely, often putting himself in danger, drawing fire, to save his men.

On January 26, 1945, in eastern France, Audie’s men came under attack by the Germans. They were gravely outnumbered as six tanks and 250 enemy infantrymen advanced with all their firepower. Audie ordered his men back, so they could regroup and better defend themselves until reinforcements arrived. Clearly, they wouldn’t be able to hold their position for long as the Germans advanced. On his own, and suffering a leg wound, Audie climbed onto a nearby abandoned tank that was on fire. Manning the machine gun, he fired on enemy troops attacking him on three sides, for almost an hour. He managed to impede their advance and allow his men to engage in the counterattack that drove the Germans into retreat.

In all, he suffered wounds three times in battle, and at the end of World War II, Lt. Murphy had earned 28 medals, including The Medal of Honor and three Purple Hearts, plus three medals from France and one from Belgium.

When victory was declared, Audie Murphy was still technically a minor, having not yet reached 21st birthday. The war forced him to face horrific situations that demanded split-second life or death decisions, and he made them with valor and wisdom beyond his years, but the experience took its toll. For the rest of his life, he battled his own inner demons, plagued by nightmares, bouts of insomnia and depression, in what we know today as PTSD. He once remarked, he couldn’t get to sleep without a loaded gun under his pillow.

Upon his return to The United States, he was rightfully lauded a hero, wined and dined, and parades were held in his honor. He was the symbol of the triumphant conqueror. Though he could be testy in other aspects of life, when it came to the military and his role in World War II, he was nothing but respectful and humble.

“I never liked being called the ‘most decorated’ soldier,” he once said, “There were so many guys who should have gotten medals and never did—guys who were killed.”

When James Cagney saw the baby-faced warrior’s photo on the cover of Life magazine, he contacted Audie, and invited him to Hollywood to try his hand at acting. He arrived in California with just his good looks and a willingness to give it a shot.

“I’m working under a great handicap,” Audie once said, “…no talent.”

James Cagney’s production company financed acting and dancing lessons for Audie, but still his new career practically stalled. He had signed on as a contract player with Cagney for $150 per week, but hadn’t been cast in one film. In 1947, a disagreement with Cagney’s brother, William, co-owner of the film company, ended Audie’s contract. Cut loose and on his own in a town where careers were built on coveted contracts, and “who you knew,” and destroyed by gossip, rumor, and innuendo, Audie took a room in Terry Hunt’s Athletic Club and lived on his army pension, $113 per week.

A fighter all his life, Audie wasn’t about to give up. He may not have had that inner calling or that flash of brilliance that many famous stars display from a young age, but one thing he did have: determination. In 1948, he met writer David McClure, who helped him get a bit part in Texas, Brooklyn and Heaven, and the agent of Audie’s then girlfriend, actress Wanda Hendrix, got him a small part in Beyond Glory, a film starring Alan Ladd. Things were looking up. In 1949, Audie landed his first lead role in Bad Boy, in spite of the production company president’s concern about Audie’s lack of experience.

That same year, Audie and Wanda married, but their marriage was tumultuous, haunted by Audie’s ongoing struggles with PTSD. They divorced in 1951. In contrast to difficult times at home, Audie signed a seven-year contract with Universal Studios now earning $2,500 a week. In his first film for Universal, Audie played Billy the Kid in The Kid from Texas. He portrayed Jesse James in Kansas Raiders, and Ring Hassard, an outlaw’s son, opposite his wife in Sierra. Ironically, by the time Sierra was released, Audie and Wanda had already split up. Just four days after his divorce from Wanda, Audie married airline stewardess, Pamela Archer. They had two sons, Terry and James.

In all, Audie made more than 40 films during his Hollywood career. Many air on INSP, including Destry, Walk the Proud Land, 40 Guns to Apache Pass, Ride a Crooked Trail, The Quick Gun, The Guns of Fort Petticoat, Night Passage, among others.

The unlikely war hero had become the unlikely Western movie star. He’d transformed himself into an actor, writer and songwriter, and had come a long way from Kingston, Texas. But Audie started his life in poverty, and, sadly, he would end it in poverty.

Over the years, Audie embarked on several business ventures including, ranching, Quarter horse breeding and racing, investments in an Algerian oil company, pouring hundreds of thousands of dollars into all these efforts. To make matters worse, he accrued substantial gambling debt. Adding insult to injury, the IRS came calling for unpaid taxes. He declared bankruptcy in 1968.

In spite of his dire financial situation, he refused to make an easy buck appearing in cigarette or alcohol commercials, claiming it would be a bad influence on the nation’s youth. His concerns for society extended to veteran issues. He was an advocate for Vietnam War veterans. He lobbied the government for resources to help returning service members cope with the psychological issues in the aftermath of combat, as they adjusted to life at home, a situation he knew firsthand.

The man who faced death and won, as he stood atop a burning tank, singlehandedly fending off enemy troops, met his end by accident. Audie Murphy died on May 18, 1971, when, due to foggy

conditions, his private plane crashed in the mountains near Roanoke, Virginia. He was 46 years old.

Audie was buried with full military honors at Arlington National Cemetery. At his prior request, his gravestone is plain, that of any soldier, not the stone embellished with gold leaf due a Medal of Honor winner, like himself. He left behind his wife, Pamela and sons, Terry and James.

Audie Murphy’s story didn’t end with his death. Beyond his treasury of films and astounding life story, Pamela made sure her beloved husband’s name was not sullied by gossip of his financial decline. Though penniless, she was determined to pay back Audie’s debt, and she did—every last cent. In her work, she found the perfect way to honor his legacy by continuing his devotion to veterans.

Pamela moved from the family’s luxurious ranch home to a small apartment, and took a job as a patient liaison at the Veterans Administration Sepulveda Ambulatory Care Center in North Hills, California. She worked tirelessly to aid the veterans who arrived at the center, ensuring they got timely and appropriate care, often working beyond her shift to see that every man on her daily agenda had been to a doctor. She considered these men part of Audie’s life, his men, his buddies, though decades had passed since his war days.

Pamela tended to keep her identity a low profile, but when veterans found out she was the wife of war hero, Audie Murphy, many asked her for a hug, and she complied. She worked at the V.A. until she was 87. In 2010, Pamela Murphy passed away at age 90, still living in the small apartment she took after Audie’s death.