The Western world of Louis L’Amour, comprising nearly 100 novels and 400 short stories, has a reach far beyond traditional western fans. I was introduced to his work by two fellow college students: a black woman from Panama and a Jewish man from Brooklyn. The international appeal of his pioneer tales made his work a natural for movies and television. There have been 18 movies—including a Bob Hope comedy, seven TV movies, two series, one miniseries, and more than a dozen TV episodes either written by L’Amour himself or based on his stories.

L’Amour, originally spelled LaMoore, was born in Jamestown, North Dakota on March 22, 1908. He grew up listening to his grandfather’s tales of fighting the Civil War and Indian Wars. Surrounded by a family of voracious readers, he longed to be a storyteller, and, as he told in his memoir, Education of a Wandering Man, he yearned for life experience. Leaving school in 10th grade, he rode the rails, did every imaginable kind of physical labor, and met men like legendary westerners Bill Tilghman, Elfego Baca, and Emmet Dalton. As a merchant seaman, he circled the globe.

L’Amour began selling adventure stories to the “pulp” magazines in 1937 and returned to the trade after serving in the Army in Europe during World War II, achieving the rank of First Lieutenant. Settled in Los Angeles, he finally made a splash with Hondo, starring John Wayne in 1953. It even received two Oscar nominations: Best Supporting Actress for Geraldine Page and Best Writing. Sadly, L’Amour had to withdraw, as it was incorrectly nominated as a screen original when it was actually based on his story The Gift of Cochise, published in Collier’s magazine the previous year. 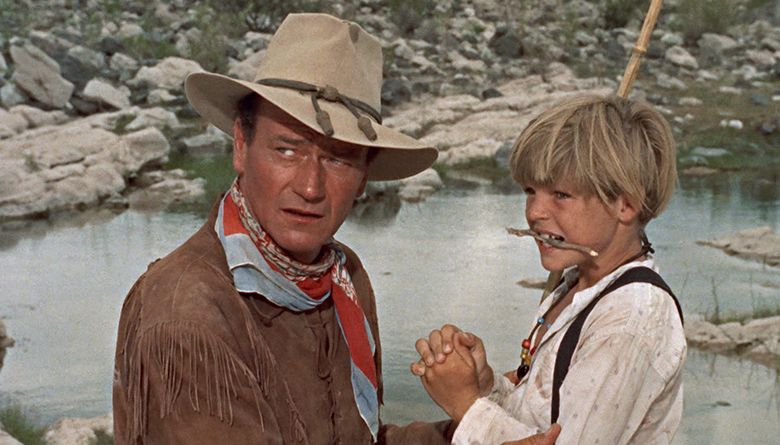 While Hondo is the movie that made him famous, it was not the first L’Amour story to be filmed. That was 1951’s Wells Fargo Gunfighter, a Republic ‘B’ starring Allen “Rocky” Lane. Along with Hondo, the floodgates were opened. There was Rory Calhoun in Four Guns to the Border in 1954, Joel McCrea in Stranger on Horseback in 1955, Howard Duff in the 1956 film, Blackjack Ketchum, Desperado.

And already, the recurrent themes and prototypical characters of the L’Amour films were present. In Hondo, Apache Territory (1958), The Quick and the Dead (1987)—not the 1995 Sharon Stone movie—and Conagher (1991), into an unforgiving land, sparsely peopled by unforgiving men comes a husband and wife and maybe a boy moving west, unprepared for what lies ahead. Despite their inexperience, the women are brave and strong, heroic.

With travel and communication so difficult, when the husbands of Hondo’s Geraldine Page and Conagher’s Katharine Ross are gone too long, the wives must assume that they are now widows, and carry on alone. In Shalako (1968), Brigitte Bardot is traveling with a hunting party of wealthy European dilettantes, but her shooting skills keep her alive when the Apaches attack. Their men are at best incompetents like Quick and the Dead’s Tom Conti, gutless wonders like Apache Territory’s John Dehner, or outright swine like Hondo’s Leo Gordon. 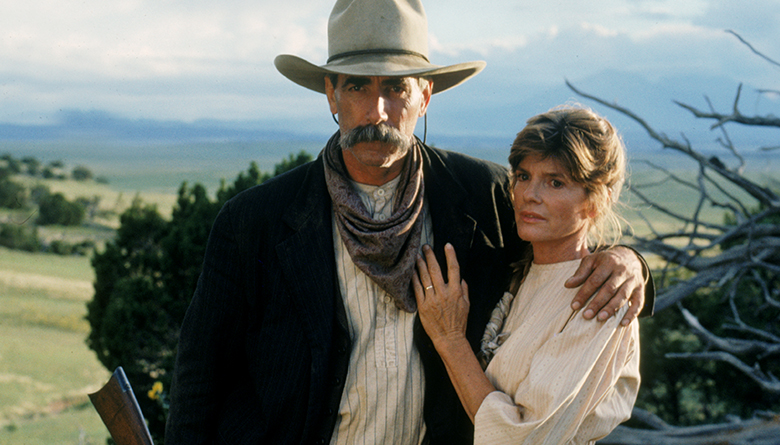 Then there is the hero, often the title character, be it John Wayne, Sean Connery, Rory Calhoun, or Sam Elliot. He isn’t seeking new responsibilities; “My only plan is to stay alive,” says Calhoun in Apache Territory, a speech echoed in virtually all of the films. But despite his frustration, his sense of decency won’t let him not help. Besides, there may be a beautiful widow on the horizon.

Among the other notable L’Amour movies, 1956’s The Burning Hills starring Tab Hunter and Natalie Wood is the best; 1960’s Heller in Pink Tights, starring Sophia Loren is the most amusing; and 1955’s Treasure of Ruby Hills is the worst—L’Amour “hero” Zachary Scott spends the big gunfight hiding under a staircase!

Until very late in his career, despite his tremendous success, L’Amour’s novels were published as paperbacks, the poor stepchild to hardback books. Ironically, most of the finest of L’Amour films were made for television, once the poor stepchild to the movies. The reason was L’Amour’s growing recognition, leading to greater respect for the source material among filmmakers. And there was L’Amour’s direct involvement.

Jim Byrnes had written 34 episodes of Gunsmoke, created The Gambler franchise for Kenny Rogers, and created the How the West Was Won TV series. “I read Hondo when I was still struggling, trying to be a writer. I loved that book. Forty years later I did The Sacketts. I met him several times, and what a gentleman. Great guy.” 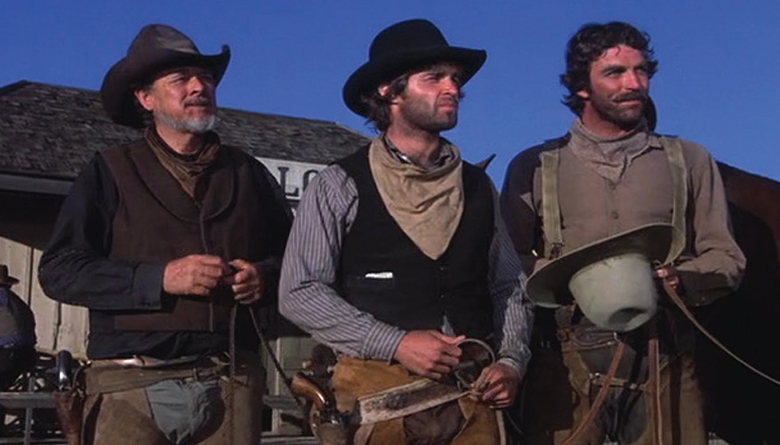 Writer/Executive Producer Byrnes cobbled together key elements from the first two volumes of L’Amour’s tremendously popular Sacketts novels for the miniseries, working with director Robert Totten to assemble the cast, particularly the actors who would play the three Sackett brothers. Actor Jeff Osterhage had come to Hollywood from Columbus, Indiana, and nailed the first role he’d auditioned for, starring in True Grit: A Further Adventure opposite Warren Oates. Sam Elliot had already been cast. Although he had to audition, Osterhage recalls, “While we were filming, Totten said, ‘I knew you were gonna be Tyrell ever since I saw you in True Grit.’” The third brother still needed to be cast. Byrnes says, “Totten wanted Buck (Taylor) for the part. Tom (Selleck) came in five times to read, and Bob still wanted Buck. I said, ‘This guy is going to be a star, so he had Tom come in and read again.”

Selleck remembers, “I’m glad I was honest with Totten because most actors lie. He asked, can I ride a horse? I told him, no, but I’m not afraid of them, I’m a good athlete, and I can learn.” Selleck got the part, and Buck Taylor got a strong supporting role. Word quickly spread about the quality of The Sacketts, and soon everyone wanted to be involved.

“Slim Pickens and Pat Buttram and Shug Fisher and Jack Elam, they really had small parts,” Selleck remembers, “But they all knew Totten.” Osterhage’s only disappointment was what didn’t make it to the screen. “We shot six hours’ worth of footage for three parts and they edited down to two parts.” 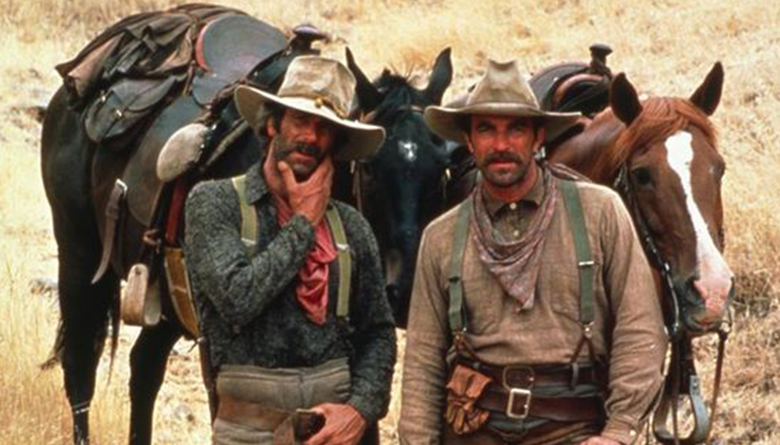 “We had to do some editing,” confirms Byrnes. “We had to cut some good stuff.” In 1982, Louis L’Amour’s The Shadow Riders was a follow-up to The Sacketts with the same cast of leads, only the Sacketts became the Travens. “They didn’t have the rights to The Sacketts name. So, Louis and I got together; he gave me the first scene. He says, ‘You do the first scene my way, then you just take it where you want to go, and I’ll go where I want to go. His novel and my screenplay are entirely different.”

All three leads maintained friendships with L’Amour and his family. Jeff Osterhage remembers, “I actually dated his daughter, Angelique L’Amour. And I did a graduate film for Beau, his son. So, I was over at the house, and they were so sweet. Louis was so quiet and soft-spoken.”

Sam Elliot would star in two more excellent Louis L’Amour TV films, 1987’s The Quick and The Dead, and 1991’s Conagher, which he produced, co-scripted, and co-starred in with his wife, Katharine Ross.

In 2001, Selleck would produce and star in another fine TV adaptation, Crossfire Trail, based on one of L’Amour’s earliest books. L’Amour had died in 1988, but director Simon Wincer, recalls, “I know Louis’ wife was very happy with it. Very happy with it indeed.”

Looking back on making The Shadow Riders, Selleck recalls, “it was such a thrill when the book came out, to see us, Sam, Jeff, and I pictured on the back of the book. Because,” he added with a chuckle, “Louis L’Amour’s a big deal.”