More than sixty years after his death, Humphrey Bogart remains an icon of the movies. Like John Wayne and Clark Gable, Bogart epitomizes what women want, and men want to be. Known for sophisticated big-city roles like Casablanca’s Rick Blaine, he seems out of place in a rural period picture. Most viewers assume his only Western was the contemporary Treasure of the Sierra Madre. But there were three earlier Westerns, and while Treasure is inarguably the masterpiece, the other three are well-worth seeing.

Born in New York City in 1889, Humphrey became a famous face when just a baby: his mother was celebrated illustrator Maud Humphrey, and “The Maud Humphrey baby” was soon gracing the boxes of Mellin’s Baby Food. His father was a prominent physician, and Humphrey’s high-society parents were disappointed at his checkered scholastic record. After his return from World War Navy service, they were even less thrilled at his decision to act. But he successfully pursued a Broadway career and soon found film work as well. 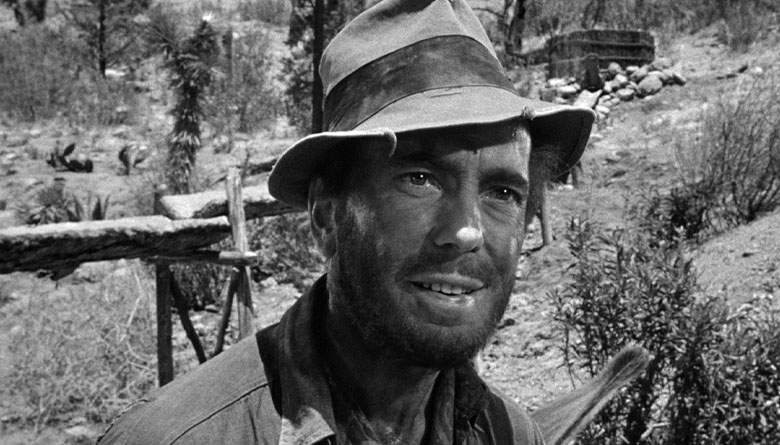 A Holy Terror, his first Western, was Bogart’s sixth movie. Hollywood didn’t know what to do with him any more than did Broadway, where he was equally likely to be a menace or the guy who ends the scene by calling, “Tennis anyone?” A 1931 FOX “B,” A Holy Terror stars George O’Brien as a New York society boy who flies to Wyoming in search of his father’s killer: He “cute-meets” pretty Sally Eilers when he accidentally crashes his plane into her house. Her fiancé, Bogart, is not amused, especially when things turn romantic. Bogart also happens to be the ranch foreman for O’Brien’s chief murder suspect. Bogart dominates the screen whenever he appears. In a characterization with more depth than you’d expect in a B Western, his insecurity is what makes him dangerous. Rita La Roy stars as his spurned ex-gal, a cigar-counter girl, endlessly taunting him to be a man, leading him into rash mistakes, whether making a play for Sally or putting O’Brien on a “killer” horse.

Bogart handled the riding and other western requirements well but wasn’t happy with his own work. “I was too short to be a cowboy,” he told friends, “so they gave me elevator shoes and padded out my shoulders. I walked around as though I was on stilts and felt like a dummy.” Bogart’s only B Western is available on Youtube if your eyes can take it.

Six movies later, in 1936, Bogart became a star. In the original Broadway production of The Petrified Forest, set in a country diner, stage and screen star Leslie Howard played the disillusioned writer. Bogart was Duke Mantee, the escaped killer modeled on John Dillinger, who takes the diner customers hostage. When Leslie Howard was offered the lead in the film, he refused unless Bogart recreated his role. In gratitude, Bogart and Lauren Bacall’s daughter, born in 1952, was named Leslie. Bogart signed a Warner Bros. contract, joining “Murderers Row”, which included James Cagney, Edward G. Robinson, Paul Muni, and George Raft. But while they were leading gangsters, he was a supporting player.

He did 27 films between 1936 and 1940. Two of those films were Westerns, 1939’s The Oklahoma Kid, and 1940’s Virginia City. The Oklahoma Kid is outlaw James Cagney. On the eve of the 1893 Cherokee Strip Land Run, Whip McCord (Bogart) and his gang rob a stagecoach of a gold shipment meant to pay Indians for their land rights—and then the Kid hijacks it from McCord, making a serious enemy. Cagney’s father and many good folks have plans to build a town in the about-to-open territory, but when the shot is fired, and they reach those plots of land, McCord and his “sooners” are already there, and the old man makes a deadly compromise, allowing McCord control of liquor and gambling in exchange for the land. Bogart does a splendid job throughout, memorably firing up a lynch mob, and a knock-down, drag-out brawl between Cagney and Bogart, some on a flight of stairs, is spectacular.

Cagney himself was not impressed, as he wrote in his memoir. “Banal script notwithstanding, the actors went to the set to do the best job we could with the material at hand. Bogie played a heavy in it, doing his usual expert job. By this time in his career, he’d become entirely disillusioned with the picture business. Endlessly the studio required him to show up without his even knowing what the script was, what his dialogue was, what the picture was about. On top of this, he would be doing two or three pictures at a time. That’s how much they appreciated him.”

In 1940’s big-budget Civil War Western Virginia City, Confederate officer Randolph Scott runs a prison camp and foils northerner Errol Flynn’s attempts to escape, for a time. Soon both men, each working for his government, are converging on Virginia City, home of the Comstock Mine, each trying to grab five million dollars in gold that could keep the South in the fight. They also fight over Southern spy Miriam Hopkins. 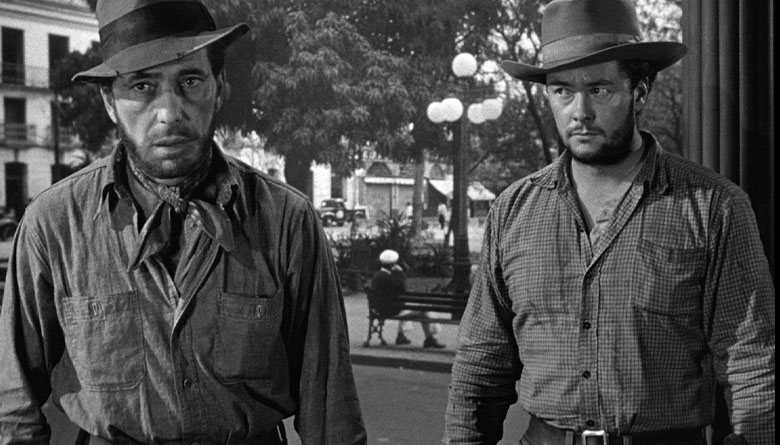 Flynn meets Hopkins as they travel by stagecoach, when, as the Variety review describes it, “En route, the stage is held up by John Murrell, outlaw, who is in reality Humphrey Bogart behind a slick-waxed mustache.” Murrell was a real man, known as a “land pirate”, and although born in Virginia, someone at Warner Bros. decided that he should be Mexican, and lead a band of banditos. Handsome and suave as he is, Bogart’s accent is terrible, and his dialogue is cringe-worthy: “What eez your beezness, Meester?” “That bunch ees all wore out. We geeve them a leetle surprise, hey?” Caramba! Still, Variety notes, “Audiences would like to see more of Bogart than the script provides.” Incredibly, one year later, Michael Curtiz, who led Bogart through this embarrassing exercise, would direct him in his most unforgettable performance, as Rick Blaine in Casablanca.

Though the story seems contrived, Virginia City is a very enjoyable film, due to the (other) performances, and the tremendous action scenes. In the stagecoach scene alone, stuntman Yakima Canutt, improving on his previous year’s Stagecoach, doubles ‘Big Boy’ Williams being thrown off by Bogart and dragging under the coach, then doubles Flynn jumping off the front to the lead team, to get control of the runaway stage.

Undoubtedly the greatest collaboration Bogart had with any director was the seven films he made with John Huston. Huston recalls in his autobiography, “B. Traven’s novel Treasure of the Sierra Madre was to be my next picture for Warner Brothers, when war was declared. [Producer] Henry Blanke got them to hold it for me during my time in the Army.” He finally got his chance to make the film in 1948. The secretive Mr. Traven—there is little agreement on who he was or where he came from—wrote a wonderful story about three American drifters in Mexico who band together to prospect for gold and turn against each other when they hit the motherload.

John’s father, Walter Huston played Howard, the old, experienced prospector, and would win an Oscar for his enthralling performance. Tim Holt, star of a long-running series of RKO B westerns, had the best role of his career as Curtin, the youngest and greenest of the group. Bogart would play Fred C. Dobbs, the loose cannon of the trio. Charming at times, he was dishonest, a braggart who could turn homicidal at the drop of a hat; it’s one of his most fascinating, though least likable, roles.

Huston notes, “The Treasure of the Sierra Madre was one of the first American films made entirely on location outside the United States.” The result is an undeniable realism and naturalism in every scene. But that realism wasn’t easily gotten. Bogart said, “John always wanted everything perfect. If we could get to a location site without fording a couple of streams and walking through snake-infested areas, in the scorching sun, then it wasn’t quite right.”

Although there may never be a definitive answer to who the greatest film actor was, be it Humphrey Bogart or Spencer Tracy or Marlon Brando, it’s clear that Bogart played more varied roles than just about any star you can name, and without that greasy mustache, he was convincing in all of them.