John Ford: One of the Greatest Directors of All Time

Many years ago, when Orson Welles was asked to name his top three directors, he replied: “John Ford, John Ford, and John Ford.” Reportedly, Orson Welles watched Ford’s classic film, Stagecoach, over 40 times as he prepared to make Citizen Kane. Today, John Ford is still considered one of the best directors in America – and in all of movie history.

John Martin Feeney (known as Sean to his Irish immigrant parents) was born in Cape Elizabeth, Maine in 1894. His father, John Augustine Feeney, was a saloon owner and an alderman while his mother, Barbara Curran, was a housewife. John was surrounded by older brothers that he revered and grew up in a hard-drinking, hard-driving, male-dominated Irish community.

In 1914, John followed his older brother, who had renamed himself “Francis Ford,” to Hollywood, where Francis worked as an actor and director during the silent film era. John renamed himself “Jack Ford” and Francis utilized him as an assistant, handyman, stuntman, and actor. Francis cast John in 15 of his movies between 1914 and 1918. 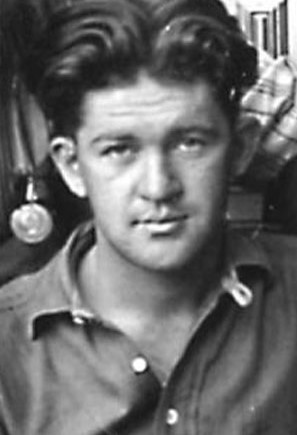 Within a few years, Francis Ford’s directing career ended and Jack Ford stopped acting – and became John Ford, the director. In 1924, he directed The Iron Horse, his first Western and his first masterpiece.

Over the course of the next five decades, John Ford directed many great American classics. Among them are Stagecoach, Young Mr. Lincoln, The Informer, The Grapes of Wrath, How Green Was My Valley, My Darling Clementine, Gunfight at the O.K. Corral, Fort Apache, She Wore a Yellow Ribbon, Rio Grande, The Quiet Man, Mister Roberts, The Searchers, How the West Was Won, and The Man Who Shot Liberty Valance, considered Ford’s last masterpiece. During this span, he won 4 Academy Awards for Best Director (a record that still stands).

In WWII, Ford served in the U.S. Navy as the head of a documentary film unit. He won back-to-back Academy Awards for his documentaries, The Battle at Midway (where Ford was wounded when hit by shrapnel in his arm while filming) and December 7th.

But while John Ford was recognized as a great director, he was not generally beloved. He was known for his odd eccentricities, relentless bullying, and disgust for actors demanding the star treatment. Ford called John Wayne a “big idiot,” and once, after Henry Fonda questioned his abilities as a director, he punched him so hard that Fonda flew across the room.

While he cultivated the persona of a “hard-drinking” Irish man’s man, he also had a tender side which he tried very hard to hide. When a former employee publicly begged him for $200 for his wife’s operation, John Ford knocked him to the ground, saying: “How dare you speak to me in this manner!”

The man seemed shaken, but Ford’s business manager handed him a check for $1,000, took him to Ford’s waiting chauffeur, and was met at his home by an ambulance that took him and his wife to the hospital. Once there, they met a surgeon hired and paid by Ford to operate on her immediately. Later, Ford purchased them a house and gave his old employee a pension for life.

Although John Ford could be demanding, he had a loyal band of actors that stayed with him through the years. Informally known as the John Ford Stock Company, this group included John Wayne, Henry Fonda, Ward Bond, Maureen O’Hara, Chill Wills, Vera Miles, Victor McLagen, James Stewart, and Dolores del Rio, among others.

“Nobody could handle actors and crew like Jack,” John Wayne said. In fact, many of John Ford’s favorites said he got the best out of them. “I tell the actors what I want, and they give it to me, usually on the first take,” Ford said of them.

After almost sixty years in Hollywood and over 140 films directed, John Ford’s health began to deteriorate. In 1970 he broke his hip and was later diagnosed with stomach cancer. In 1973, he was honored to be the first recipient of the Lifetime Achievement Award of the American Film Institute and to also receive the Presidential Medal of Freedom at this event – delivered personally by President Richard Nixon. Just a few short months later, John Ford passed away.

John Ford’s films still resonate with viewers around the world and continue to stand the test of time. Admired by today’s greatest directors (including Martin Scorsese, Steven Spielberg, and Clint Eastwood), his movies capture the essence of America with each beautifully crafted scene. John Ford is truly one of the greatest directors of all time.

John Ford: Behind the Lens

Want more blogs and games? Sign up for the INSP Newsletter!