Secrets haunt a senator, famous for killing an evil outlaw. Now, he reveals the truth about the showdown.

The year is 1910. Tom Doniphon, rancher and longtime resident of the small western town of Shinbone, has died. He was well-regarded around the region, but was by no means a man of great distinction. He was not a famous gambler, gunslinger, land baron or politician. He was just an ordinary man who weathered life’s ups and downs, just like everyone else. Yet, on the day of Doniphon’s funeral, the renowned Senator Ransom Stoddard and his wife Hallie of 25 years arrive to pay their respects. Why would a distinguished senator travel hundreds of miles to attend the funeral of a simple rancher? How were the lives of these seemingly opposite men entwined? These are the questions swirling around the head of Charlie Hasbrouck, a local reporter for “The Star.” 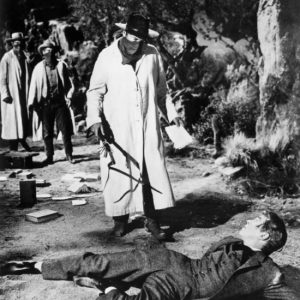 Hasbrouck has a natural nose for news, and feels he’s onto a scoop. He persistently pursues Stoddard for an interview, and when Stoddard finally agrees, a journalist’s career-making story emerges.

As a young, idealistic attorney, Stoddard moves to the dusty frontier to bring law and order to the west. He doesn’t believe in showdown justice, doesn’t own a gun and doesn’t even know how to shoot one. His faith is in the law and reason. Unfortunately, not many people in the Old West see the world through Stoddard’s eyes, and before he reaches his destination, his stagecoach is attacked by bandits led by Liberty Valance. On that coach is rancher Tom Doniphon, who fights off the outlaws who, upon learning Stoddard is a lawyer, had beat him unconscious.

Doniphon takes Stoddard to a steakhouse restaurant in Shinbone, where Hallie works as a cook. She and the owners take care of Stoddard during his recuperation, but Doniphon is in love with Hallie, and is none too happy when a budding romance develops between Stoddard and her. Soon Stoddard assimilates to life in Shinbone, setting up a law office, founding a school, teaching residents, including a grateful Hallie, to read and write.

When people of the territory must decide whether or not they want to be part of the growing United States, Doniphon nominates Stoddard as a delegate to represent them. Now, Valance, who has been terrorizing the region and the town on and off, has the perfect opportunity to rid himself of this many of the law, and in a final showdown between Stoddard and Valance, Stoddard finally pulls the trigger. But was it his shot that killed the notorious outlaw? The secret eats at him for a quarter century, and now this reporter knows the truth that could destroy Stoddard’s prestigious and still promising political career.