Tough Colonel Yorke is extra hard on his newest recruit—his own son. Now, his ex-wife arrives to take the boy home, just as an Indian battle erupts. 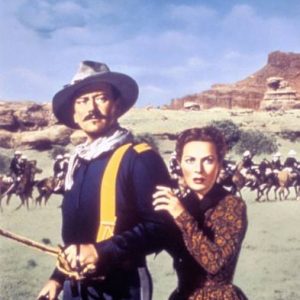 John Wayne and Maureen O’Hara star as estranged husband and wife in this epic saga of love, honor, valor and duty.

Fifteen years after The Civil War has ended, tough, but stressed out, Lt. Col. Kirby Yorke heads an understaffed command on the United States side of the Rio Grande. His mission is to protect settlers in the fort against marauding Apache Indians. The renegade Indians have been conducting raids then escaping over the border to Mexico, where they know the U.S. Cavalry cannot retaliate. In fact, both nations have an agreement that the U.S. military will not cross the Rio Grande under any circumstances, as doing so would violate the sovereignty of another nation, the consequences of which would be dire.

On the personal front, Yorke has been estranged from his wife for over a decade, and he hasn’t seen his son since the boy was a baby. So when a new group of recruits is assigned to Yorke’s post, he’s shocked that one of the young men is Jeff, his now 15-year-old son, a West Point drop out who would rather get right into the action than study about it.

Not wanting to show preferential treatment, Yorke is unusually rough on the boy, but Jeff takes it earning the respect of the other soldiers, and the friendship of Travis Tyree, a soldier on the run from the law, and Daniel “Sandy” Boone. The two older men take Jeff under their wings, teaching him the life lessons a young man needs to know.

As if Yorke didn’t have enough to handle, his estranged wife shows up unexpectedly. She found out about Jeff’s departure from school and subsequent enlistment, and she’s there to take her underage son home. When their marriage was becoming strained, Yorke was given an ultimatum: the military or marriage. But now the two begin to remember why they were together to begin with, and it becomes clear he and Kathleen still feel affection if not love for one another. But that doesn’t mean they won’t fight bitterly over Jeff’s future. When Jeff refuses to leave with his mother, he proves he’s a real soldier and a man of honor. Soon he’ll have to prove himself in a deadlier situation—on the battlefield.

Yorke’s former Civil War Commander, now a General, arrives and orders him to cross the Rio Grande to end the Indian raids once and for all. Yorke, a Union soldier during the Civil War, has never refused an order, including having to burn down the plantation owned by his wife’s family. Yorke knows full well that if he obeys this command, he will be court-martialed. As a precaution, he gathers the women and children living at the fort, and has them transported to a safer location, but while on route, the Apaches attack and capture the wagon holding the kids.

Now, Yorke has no choice but to lead his men, including his teenage son, into what could be a suicide mission.