Robert Redford stars! A grieving Wyoming rancher tries to reconcile with his widowed daughter-in-law and the young granddaughter he never knew in this beautiful story of family and forgiveness.

Robert Redford, Morgan Freeman, and Jennifer Lopez star! A stunning panorama is the backdrop for this beautifully filmed, riveting story about family, heartbreak, and forgiveness.

Einar Gilkyson has been struggling to keep his Wyoming ranch going ever since his son, Griffin, died in a car crash about a decade ago. His wife left him soon afterward as Einar’s drinking and grief destroyed his life.

His best friend and ranch hand, Mitch Bradley, has seen him through it all. But a year ago, a bear came onto the ranch and attacked Mitch…and Einar was too drunk to keep his friend out of harm’s way. Now, with Mitch’s many injuries, Einar’s despair, and the overwhelming demands of the ranch, the pair are just barely getting by. 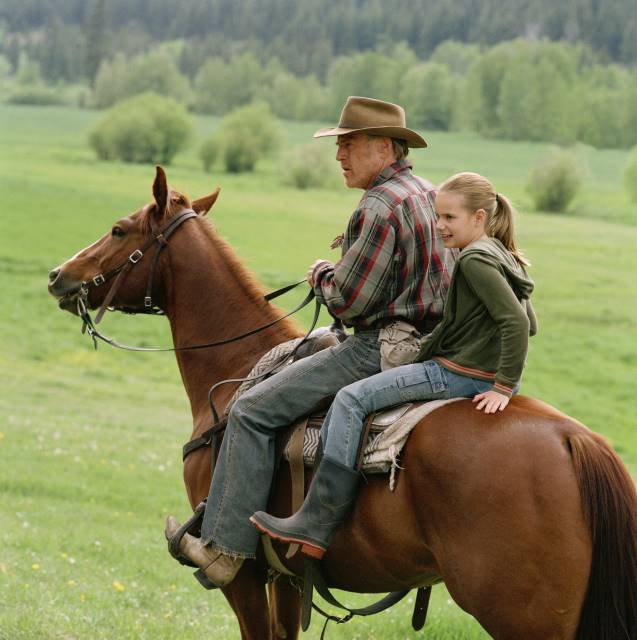 Einar intends to live out the rest of his days mired in loneliness and despair when his daughter-in-law, Jean, suddenly returns. By her side is a girl that she swears is Einar’s granddaughter, Griff. Jean tells him that they are on the run from her ex-boyfriend, who has become violent. They need shelter and they have nowhere else to turn but to Einar.

Since this is the first that Einar has ever heard of Griff, he wonders if Jean is telling him the truth. However, he realizes that he can’t turn them away since Jean is penniless, desperate, and terrified.

Einar takes them in…but still blames Jean for his son’s accidental death, and he wants to know the truth about what happened. Meanwhile, Jean tries to build a new life and Einar takes a shine to Griff since he can’t help but notice how much she looks like her dad.

The family members try their best to make this difficult situation work. But old grudges and resentments die hard as anger and accusations become the norm. Soon enough, Jean has moved out and taken Griff with her.

Remarkably, Griff returns to see her grandfather. She is affectionate, open, and longs to learn more about her family and life on the ranch. Ever so slowly, Einar’s hard heart begins to open.

Now, Einar must decide: does he cling to the ruins of his sad, heartbroken life…or find the courage and bravery to fight for his family, forgive Jean, and live again?

INSP is rolling out the red carpet in anticipation of the Academy Awards with an Oscar-Acclaimed Western movie event, so we’re... READ MORE