Partisans endlessly debate whether Tombstone or Wyatt Earp was a better film, and if Kevin Costner and Dennis Quaid, or Kurt Russell and Val Kilmer were the ultimate Wyatt Earp and Doc Holliday team. But it’s worth remembering that they are just the latest in a list of very fine films featuring excellent casts, which looked at the Earps, Clantons, and other men who met at the O.K. Corral on October 26, 1881.

When John Ford directed the classic My Darling Clementine in 1946, he chose Henry Fonda, the great American everyman, for Wyatt Earp. The muscular, athletic Victor Mature was an unexpected but wonderful choice for consumptive Doc Holliday, and it is one of his finest performances. Yet Ford was actually the second great director to tell this story: six years earlier, Allan Dwan made Frontier Marshal, casting southern gentleman Randolph Scott as Wyatt. His Doc was another underappreciated actor, Cesar Romero. Both films came from the same source, the Stuart N. Lake book, Wyatt Earp: Frontier Marshal, based on Earp’s own recollections. They even shared the same screenwriter, Sam Hellman, and much of the dialogue as well as many scenes are the same. In Clementine, Fonda tosses Doc’s girlfriend, Linda Darnell, into a horse trough. In Frontier Marshal, Scott does the same to Binnie Barnes.

So, why is Frontier Marshal considered to be a fine movie, while Clementine is deemed a classic? The difference is family: Scott comes to Tombstone alone, with no backstory; Fonda comes with brothers James (Don Garner), Virgil (Tim Holt), and Morgan (Ward Bond), men who love and care about each other. Even the bad guys, the Clantons—led by Old Man Clanton (Walter Brennan), with sons Billy (John Ireland) and Ike (Grant Withers)—are motivated by family sentiment, something Frontier Marshal lacks. Old Man Clanton was a real man, and he was important in the events leading up to the gunfight, but he is not featured in any of the other movies, probably because he wasn’t there: he died two months before the fight.

As if to prove how important writing and casting are, between those two films was 1942’s Tombstone: The Town Too Tough to Die. Though an Oscar nominee for 1931’s Cimarron, stocky, theatrical 49-year-old Richard Dix was an awful choice for 33-year-old Wyatt, and worse, his nemesis, Curly Bill Brocius, was played by that foxy grandpa, Edgar Buchanan. Produced by Harry “Pop” Sherman, who made the Hopalong Cassidy films, it shared their spectacular photography in Lone Pine, but like the Hoppys, it was a kid’s film. Virgil is played adequately by B Western star Rex Bell. Much better is Victor Jory, Gone with the Wind’s evil Tara overseer, who plays Ike Clanton with great style.

1955’s Wichita was the first Earp film shot in color, a prequel to the others as it takes place before the Earps went to Tombstone. Wyatt Earp is played by the legendary Joel McCrea. There’s no Doc Holliday in this one, but a young Bat Masterson, with Keith Larsen playing him as the local newspaper reporter. It’s an amusing idea, as Bat did become a journalist, but at the end of his days, not the beginning. Wyatt is hired to clean up the town, but he does too good a job, ruining the saloon business. Meanwhile, a corrupt doctor—Edgar Buchanan again—hires two young gunmen (and future leading men), Peter Graves and John Smith, who would later be known for Laramie, to bump Earp off. He doesn’t know that they are James and Morgan Earp. 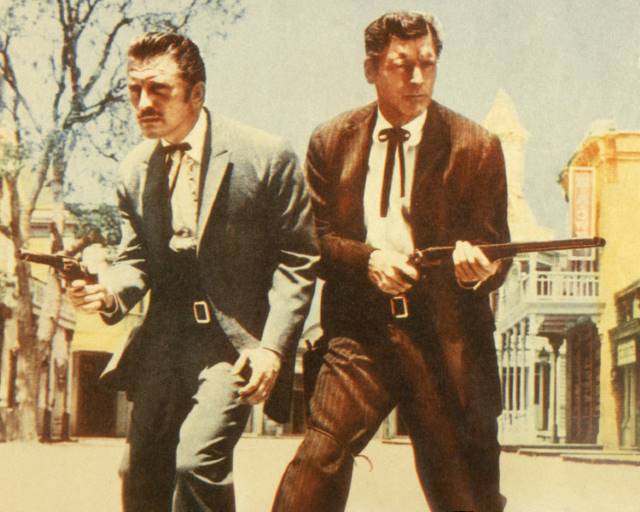 Gunfight at the O.K. Corral, from 1957, was directed by John Sturges, who later directed The Magnificent 7. The first half of the film is set in Dodge City, Kansas, focusing on one of Hollywood’s greatest acting duos, Burt Lancaster as Wyatt, and Kirk Douglas as Doc. The second half begins when Wyatt receives a telegram from brother Virgil, played by John Hudson, saying he’s in trouble in Tombstone, and needs help. Morgan Earp is Star Trek’s DeForest Kelley, and 19-year-old James is star of Adam-12, Martin Milner. 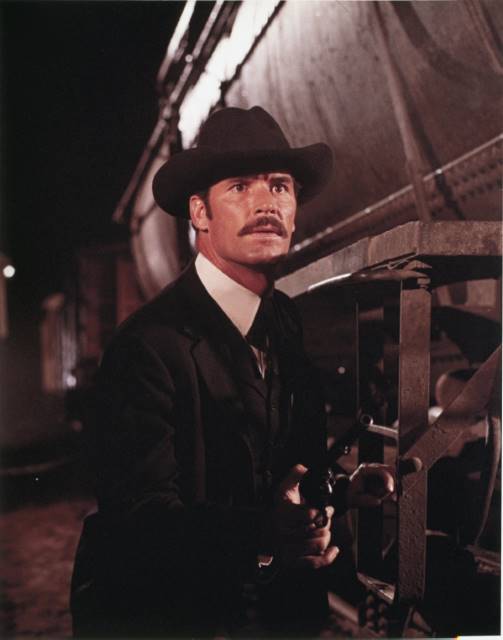 Ten years later, John Sturges continued the story with 1967’s The Hour of the Gun shot in Estudios Churubusco, in Mexico. Now James Garner is Wyatt, Jason Robards is Doc, and while O.K. Corral ended neatly—“How are your brothers?” “Comin’ along fine. Gonna be alright.”—things are not nearly so neat here: criminal charges are brought against Earp, and much of the story concerns what, after Tombstone, became popularly known as Earp’s “Vendetta Ride,” where he chased down and killed all of the men involved in crippling Virgil and killing Morgan.  Sam Melville is Morgan Earp, and Frank Converse, in what was just his second film, is Virgil. The villains are even better: Robert Ryan is Ike Clanton, and Jon Voight is Curly Bill.

Both the Tombstone script by Kevin Jarre and the Wyatt Earp script by Lawrence Kasdan not only entertain, but also tell the whole story as much as possible. And what casts! In Tombstone, in addition to Kurt Russell and Val Kilmer, Virgil is Sam Elliot, while Morgan is Bill Paxton. And what villains: Powers Boothe as Curly Bill, Michael Biehn as Johnny Ringo, Stephan Lange as Ike Clanton, and Billy Bob Thornton as a guy you just love to watch Wyatt slap around.

Of course, in casting actors for the story, remember that almost all the movies have been based on Earp’s own version of events. He went to Hollywood, and while working as a technical advisor on Westerns, became friendly with Raoul Walsh, as well as with John Ford, who introduced him to John Wayne—about the only major Western star to never play Earp. As noted on Tombstone, Tom Mix and William S. Hart were pallbearers at Wyatt’s funeral. There are other versions of the gunfight. Jack Ganzhorn, the son of a Tombstone merchant, was there, and in I’ve Killed Men, he wrote, “Western writers of fiction… glorify the Earps. We who possessed the facts know that Billy Clanton and the McLaurys were murdered.” Maybe Wyatt, Virgil and Morgan should be played by Bruce Dern, Lee Van Cleef and Jack Elam. Or maybe we should just keep doing what we’ve been doing: “Print the legend.”

Want more Western reads? Sign up for the INSP Newsletter!