Beckey Burgoyne, author of Perfectly Amanda, Gunsmoke’s Miss Kitty:To Dodge and Beyond, has attended many Gunsmoke events, and spoken to countless fans.

“There are two burning questions I consistently get: did Matt and Kitty ever kiss? And why didn’t Matt and Kitty marry?” Considering that Miss Kitty’s last episode of Gunsmoke aired in 1974, it’s remarkable that nearly fifty years later, old fans and new are still watching the show, and debating the answers to those questions. Rarely have the personal lives of fictional characters been so compelling. 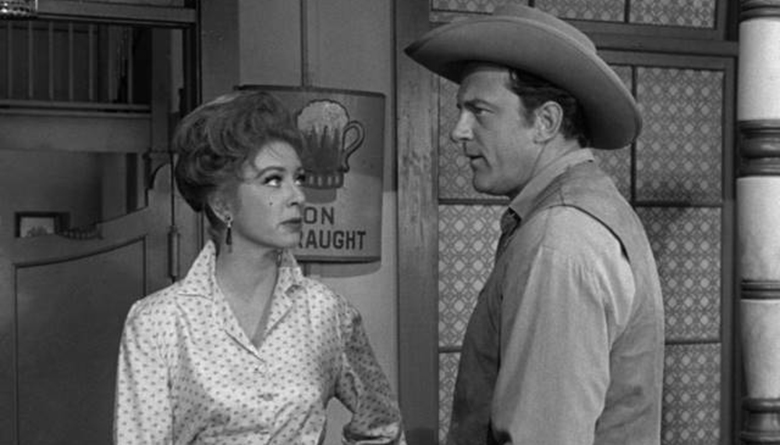 Amanda Blake was 26 and gorgeous—she’d only get more-so when the show would switch to color and reveal her flaming red hair—and James Arness was 32, 6’7”, ruggedly handsome, with a commanding voice, easy charm, and was a much-decorated soldier in World War II. You could sense their chemistry from the first half-hour episode, Matt Gets It.

So, why didn’t the producers make it a big romance? One reason was often expressed in the dialogue: a lawman made enemies, and being known as Matt Dillon’s girl would put Kitty in danger. So, what was their relationship supposed to be? Jim Byrnes, who wrote 34 of the series’ best episodes, remembers they kept it subtle. “After the fadeout, there was an unspoken deal that, after the Long Branch closed, and Matt Dillon put up the ‘closed for the night’ sign, he’d go over to The Long Branch, and go upstairs; but we never explored that.”

In fact, they flirted, teased, hugged, and walked off with their arms around one-another, but they never kissed. But oh, those deep stares! Burgoyne explains, “They just had the eyeball routine, to keep it a mystery. You knew something was going on, but you didn’t know quite what. They kept it a slow tease. They knew that if he kissed her, the next time he better kiss her twice, show a little more passion.”

As James Arness told the Archive of American Television, “I think they felt that… you could only go so far with it and then you’d have to change the character and nature of the show, so they kept it in that groove. That seemed to work because we used to get a lot of mail from people, particularly women, who said, why don’t you get [Matt and] Kitty together more? And that’s the kind of mail that we want to get. You want to have them eager to tune in and see, so they kept it at that level purposely. And I think it worked out awfully well.” 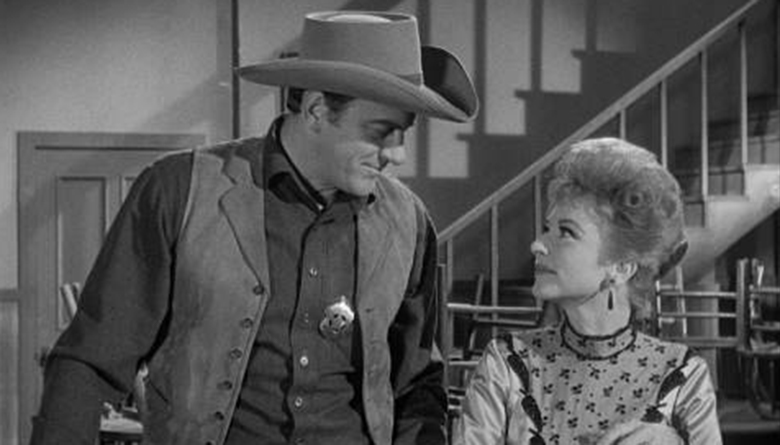 It still does. A fan recently posted beside a clip from Gunsmoke on Youtube, “Every love scene they shared put me on the edge of my seat hoping it would be more.” And if it had been more? Jim Arness said, “If Matt and Kitty [had] an on-screen love affair, they’d have to get married. And then it’d be a different show.”

“They’d say that would ruin it,” Byrnes confirms. “They said they had to keep Matt independent.”

While Gunsmoke’s writers were not about to marry off Matt and Kitty, they acknowledged that strains would develop, as would temptations. In season five’s Kitty’s Outlaw, Ainslie Pryor is a bad man from Kitty’s past who tests her loyalty to Matt. In season eight’s The Way It Is, Claude Akins has time for Kitty when Matt doesn’t, while in Cotter’s Girl, Matt tries to help orphan Mariette Hartley, and finds himself the object of her enthusiastic affections. In season 12, Sarah, is Anne Francis, a love from Matt’s past, now running a waystation for criminals, and desperate to have Matt back. In season 15’s The Badge, Kitty sees Matt shot for the 11th time, and can’t take it anymore: she puts the Long Branch up for sale, moves to another town, and goes into business with Beverly Garland.

The year 1973 seemed to trigger a sort of “19 season itch” for both Matt and Kitty. Miss Michael Learned, the mother from The Waltons, well remembers being the object of Matt Dillon’s affections in Matt’s Love Story. “Matt’s had a concussion, and he’s lost his memory. We fall in love, and I’m the only woman that Matt Dillon ever kissed. He gets his memory back, and he goes back to Miss Kitty, where he should have been in the first place.” Surprisingly, the story continued 17 years later in the TV movie Gunsmoke: The Last Apache, for which Miss Learned returned. “[Because] out of that kiss…came a little baby! In the movie-of-the-week, our child is abducted. I call on Matt to find her, to bring her back, and he discovers that he has a child.” In his search for the girl, Dillon is helped by a fellow named Chalk, played by Broadway’s Man of La Mancha, Richard Kiley. When Learned’s character dismisses Chalk as never having grown up, Matt replies, “I don’t know, he seems pretty serious. He’s talking about wanting to marry you.”

“Would it bother you if he did?” she asks.

“Ladies,” says Matt, “have been known to change their minds about such things.” Matt’s not taking the hint. 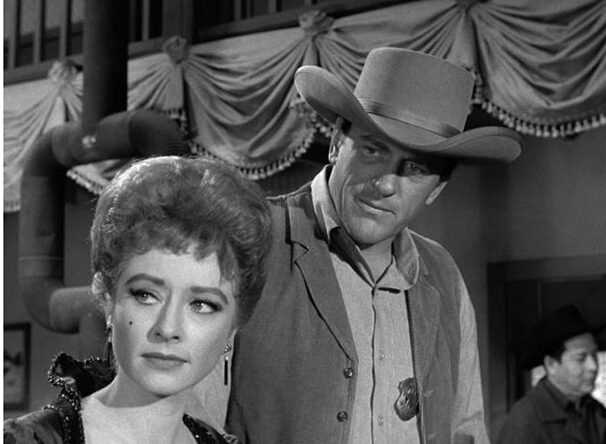 Also in season 19, in Kitty’s Love Affair, she meets a man when he’s wounded while trying to protect her during a stagecoach robbery. He proposes to Kitty, who goes to Matt with one of the most poignant speeches in the series.

“It’s hard to throw away 18 years. I know what that badge means to you, to this town, to everyone. But I’m thinking of us. I was just a kid when we met, Matt, and I was gonna live forever. I knew how things had to be with us. But I thought someday, some far-off someday, things would change. And Matt, my somedays are almost gone. I guess what I’m asking is for you to tell me to say no to Will Stanton.”

“Kitty, you know how I feel,” Matt replies. “But that’s a decision you’re going to have to make yourself.”

And Will Stanton, by the way, is again Richard Kiley! Whatever it is that Kiley has, Matt Dillon has just a little bit more of it, because the ladies always turn him down to pine for the Marshal.

Unexpectedly, that would be Amanda Blake’s last season as Miss Kitty. Now married and living in Arizona, she found the weekly commute increasingly daunting, and frequently locked horns with producer John Mantley. The final blow-up came over Blake’s wardrobe. Miss Kitty was always supposed to look elegant, and Mantley hadn’t budgeted any new costumes for Blake for several years. When she refused to go on without a new wardrobe, Mantley fired her. He would later admit, “It was the biggest mistake I ever made.” 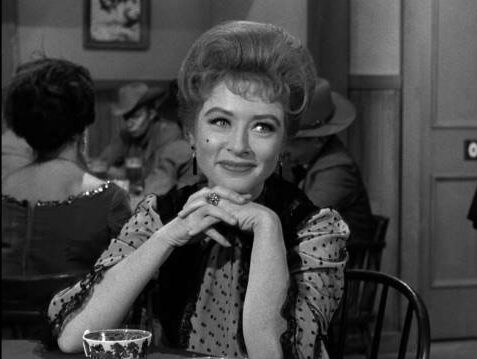 The series ended after one more season, in 1979. Arness went on to star in the How the West Was Won series, the police series McClain’s Law, and play Jim Bowie in the TV movie The Alamo: Thirteen Days to Glory. But the Gunsmoke family came together in 1987, and John Mantley rehired Amanda for the first of the TV movies, Gunsmoke: Return to Dodge, written by Jim Byrnes.

“Oh, it was nice having her back. And it was a kind of emotional thing for Amanda.” She would no doubt have continued in the subsequent Gunsmoke movies, had she not passed away in 1989.