When retired US Marshal Matt Dillon is badly injured by thieves, he finds himself back in Dodge City and under the care of Miss Kitty. As Marshall Dillon recovers, he has no idea that a vengeful enemy who was just released from prison is hunting him.

In the style of the classic, popular Western series, this is the ultimate Gunsmoke reunion movie featuring an all-star cast with James Arness, Amanda Blake, Buck Taylor and a host of other actors from the classic TV series!

After twelve years behind bars in a frontier jail, notorious gunslinger, Will Mannon is released from prison with one thing on his mind: vengeance. He’s out to kill U.S. Marshal Matt Dillon, the judge who sent him to jail, and to terrorize Miss Kitty—the people responsible for his incarceration. 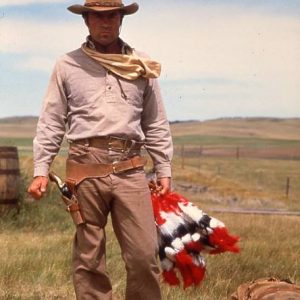 Dillon’s old pal Jake Flagg has been doing time, too, and learns of Mannon’s plan. He doesn’t want to see his friend die at the hands of the ruthless Mannon. He needs to warn Dillon, but that’s impossible from a jail cell. He tries to convince the warden to set him free, temporarily, so he can save Dillon’s life, but, not surprisingly, his request is turned down. So he devises a scheme to break out by taking the warden hostage. In a scuffle, Mannon shoots the warden, and Flagg is blamed. Now he’s being tracked by an obsessive deputy and a number of crooked bounty hunters.

Meanwhile, Dillon is retired from the Marshal Service and is living a solitary life in the mountains. When he hears about Flagg’s predicament, he leaves his seclusion and takes off to help his friend. In a confrontation, Dillon is stabbed and taken back to Dodge City, where he is to recover under the loving care of Miss Kitty, who returns from New Orleans to be with Dillon. But Dodge City is overrun by criminals, and now one more has shown up—Mannon, and he’s out to have his final showdown with Dillon.

This action-packed movie, featuring some of the Western genre’s most beloved characters, intersperses flashback scenes from previous Gunsmoke episodes with updated footage to tell a gripping tale of good versus evil.