Marshal Matt Dillon rides again in this heartwarming and inspiring reunion movie! This time, he’s on a mission to save the daughter he never knew he had – and see that justice is served for two young Indian boys.

James Arness, Michael Learned, Amy Stoch and Richard Kiley star in this beautifully written and acted reunion movie that will make you remember why Gunsmoke was one of the most beloved TV shows of all time!

U.S. Marshall Matt Dillon rides again after he gets a letter from Mike Yardner, an old female friend who needs his help now. When he arrives, Mike tells him that a renegade Apache named Wolf has abducted her daughter, Beth. He’s one of Geronimo’s War Chiefs and he is dangerous. 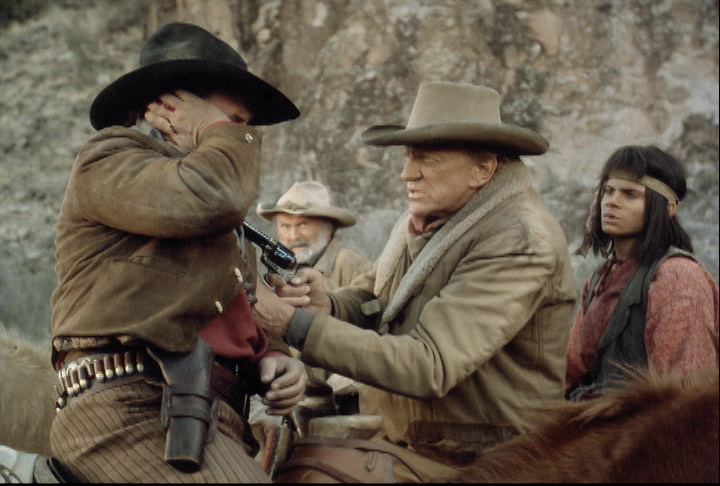 Much to Dillon’s surprise, he also discovers that Beth is not just Mike’s daughter…she’s his daughter too!

Now, with an Army Scout named Chalk by his side, Marshal Dillon comes out of retirement to try to find Beth. He’s brought along two Indian boys that are relatives of Geronimo’s in order to use them as bargaining chips to trade for his daughter.

But there are other forces at work here that threaten not only Beth’s survival, but that of the young Indian boys as well. The boys are currently in the custody of the Army, and it seems that General Myles has decided to execute them as soon as possible.

Determined to save them and rescue his daughter, Mike, Chalk, and Matt free the two young boys. Now, they won’t stop until they find Beth in Geronimo’s camp, located in the vast and unforgiving desert.

Will this mission bring Marshal Matt Dillon’s newfound daughter home – or end in bloodshed all around?