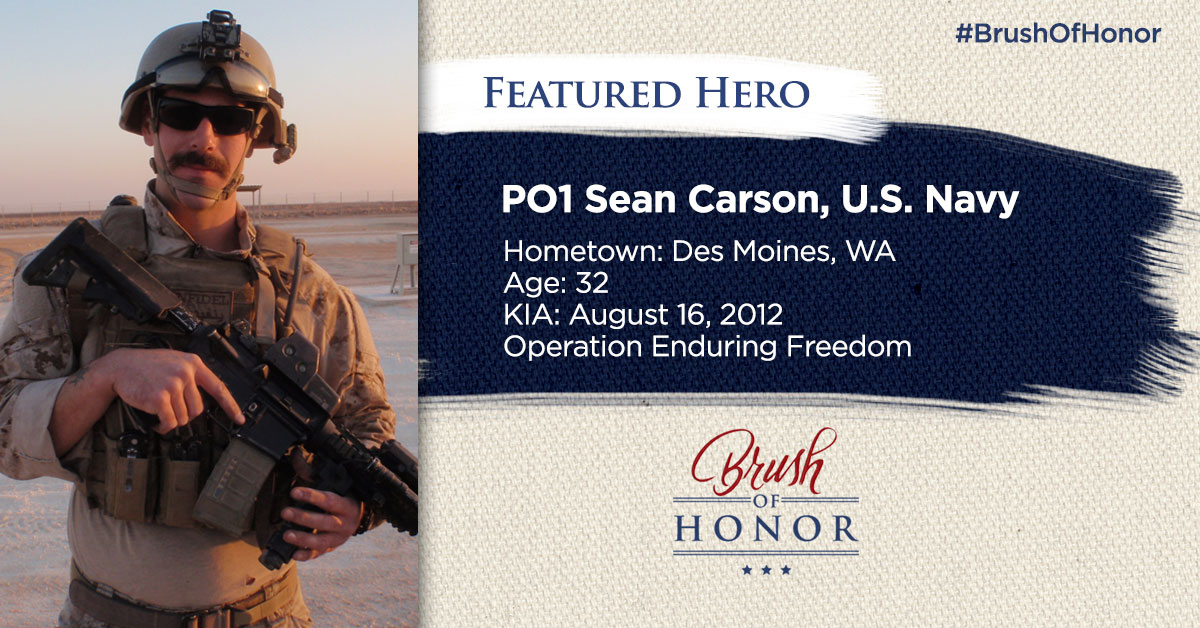 In Honor of Sean Carson

Sean Carson was assigned to an explosive ordnance disposal mobile unit in San Diego. On August 16, 2012, Sean was killed in a Black Hawk helicopter crash northeast of Kandahar, Afghanistan during Operation Enduring Freedom. He was 32 years old.

Raised in Washington, Sean Carson loved the military from an early age. According to his mother Fran, Sean had every GI Joe toy ever made, and a collection of hundreds of plastic army men.

Sean realized that serving in the Navy would fulfill his purpose, and allow him to reach his full potential. He headed off to boot camp in 1999. Sean was the epitome of a soldier, brave and valiant, and one that was at peace knowing that he was helping others. He was also a loving husband and father. Sean met Nicole while stationed in Hawaii. In 2004, they married and in 2007 their daughter was born.

After almost ten years serving in the Navy, Sean trained to become an EOD Technician. Though it’s an incredibly dangerous job, Sean knew he could make an impact. Sean was assigned to Platoon 3-7-1 supporting Naval Special Warfare Squadron FIVE and deployed to Iraq and Bahrain in support of Operations Iraqi Freedom, New Dawn, and Enduring Freedom.  Sean is credited with saving countless lives.

On August 16, 2012 Sean was conducting combat operations with SEAL Team 3, Charlie Platoon. A Blackhawk helicopter Sean was riding on was shot down by enemy fire deep inside Taliban territory. The aircraft also carried two SEAL team members, and four U.S. Army aircrew. The crash was one of the deadliest air strikes against American military service members in Afghanistan, and no one in the Blackhawk survived.

Sean Carson is survived by his wife Nicole, their daughter, his mother Fran, father Pat, and stepmother Barbi.