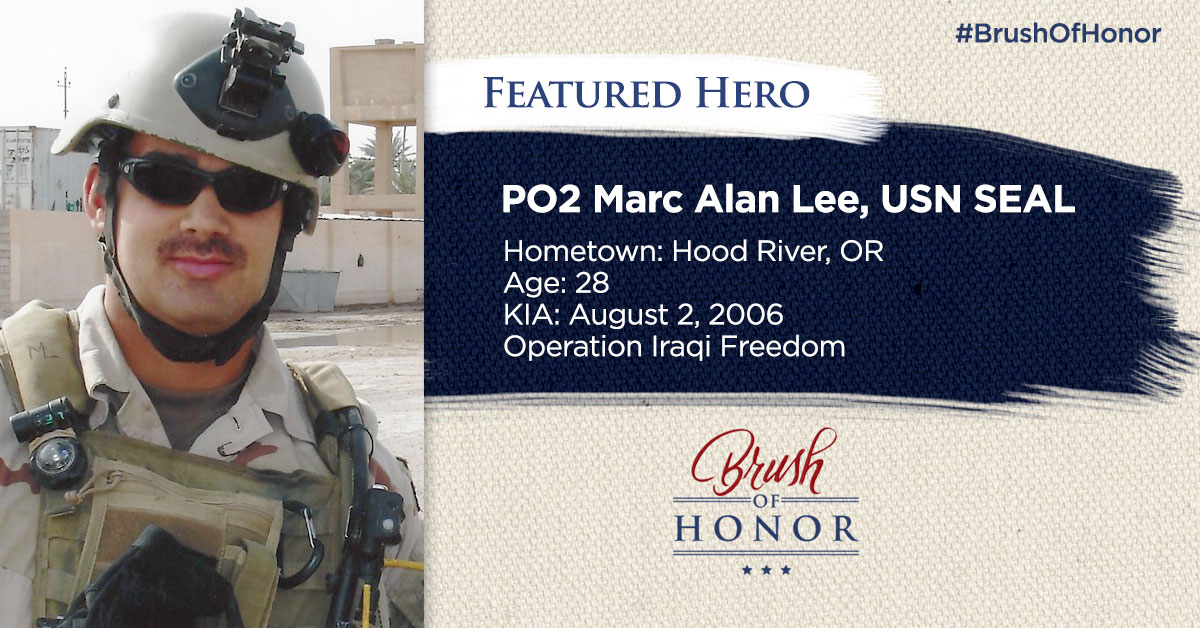 In Honor of Marc Alan Lee

Marc Lee was a member of SEAL Team 3. On August 2nd 2006, Marc was killed during combat operations while on patrol in Ramadi, Iraq during Operation Iraqi Freedom. He was 28 years old.

Marc, whose name means “Mighty Warrior,” grew up in Oregon and Colorado with his mother Debbie, and siblings Kristofer, and Cheryl. He was amazingly athletic and had a passion for soccer, which he pursued with professional aspirations.

Marc joined the Navy in May 2001 with a contract to try out for the SEALs. He graduated second in his BUD/s class. Marc was assigned to SEAL Team 3 and deployed to Ramadi, Iraq in April 2006. American forces in Iraq called Ramadi “the hellhole of Iraq.”

On August 2, 2006, Lee and SEAL Team 3, Charlie Platoon were supporting an Iraqi Army unit clearing insurgents during what would later be called “The Battle of Ramadi”. The SEALS were constantly under attack, and Marc and his team engaged enemy positions with suppressive fire numerous times throughout the day. During the mission, a fellow SEAL was wounded by enemy fire. Marc and his team provided cover fire so that their injured brother could be evacuated to safety. The team then continued the fight and came under heavy enemy fire from an adjacent building. Marc fearlessly exposed himself to direct enemy fire by engaging the enemy with his machine gun and was mortally wounded. His brave actions in the line of fire saved the lives of many of his teammates.

Marc’s platoon mates remember him being brawny and courageous, and having a huge heart, speaking openly of his love for God and family.

His brother remembers, “There’s a lot of different sides to Marc. He had an incredible sense of humor, then at other times serious and really focused. People were drawn to him. They were encouraged by him.”

In his last letter home he wrote, “Our country is a great country…I think the truth to our greatness is each other…do me a favor and pass on the kindness, the love, the precious gift of human life to each other…this is our real part to keep America free!”

Marc is survived by his mother Debbie; his wife Maya; his brother Kristofer and his sister Cheryl.