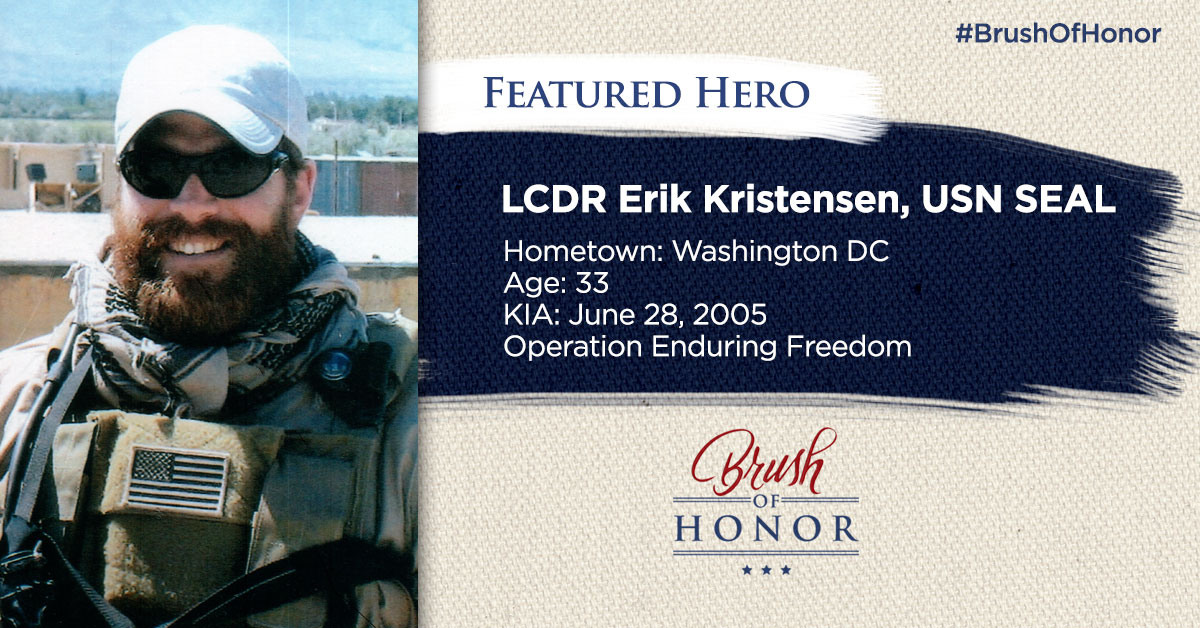 In Honor of Erik S. Kristensen

Lieutenant Commander Erik Kristensen, USN, was killed in action near Asadabad, in the Hindu Kush of Afghanistan on June 28, 2005.  He was the Task Unit Commander leading a rescue effort to rescue four US Navy SEALs that were pinned down under heavy fire. The MH-47 Chinook Helicopter transporting Erik, seven other SEALS and eight Army Night Stalkers was shot down. This mission was portrayed in the book and feature film, Lone Survivor. He was 33 years old.

Erik joined in the Navy in the footsteps of his father, retired Rear Admiral Edward K. Kristensen. Erik was a Renaissance man—he was well read, a scholar of Shakespeare, a trumpet player, and an all-around athlete, from football to lacrosse to crew.

After graduation from high school, Erik attended one year of prep school at Phillips Andover before attending the United States Naval Academy. Erik earned his varsity letter in heavyweight crew at Navy before graduating with honors as an English major and French minor in 1995. He first reported to the USS Chandler (DDG-96), where he earned his Surface Warfare Officer designation. After a tour with the SEAL Community as an Officer-in Charge of a Special Boat Unit, he returned to the Naval Academy in 1999 to teach English and began graduate studies at St. Johns College in Annapolis, MD.

Erik knew he wanted to be a Navy SEAL but was told that he was too old and would not be able to make it. Instead of listening to those who told him he could not, he chose instead to work to achieve his goal. After not being accepted into the SEAL community upon graduation from the US Naval Academy in 1995, he reapplied while an instructor at the Academy. Overcoming injury and obstacles, Erik finally realized his dream and became a SEAL in 2001. He was assigned to SEAL Team 10 based at Naval Amphibious Base Little Creek in Virginia Beach, Va.

In 2005, Erik deployed to Afghanistan as a Task Unit Commander for SEAL Team 10. In June, a four-man SEAL team was tracking Ahmad Shah, a local terrorist who had aligned with militant groups. The four were ambushed by an enemy force of more than 40 anti-coalition militia, and an intense gun battle ensued.

Upon hearing their brothers-in-arms needed help, a rescue MH-47 Chinook helicopter was dispatched with eight SEALS, including Erik, and eight Army Night Stalker commandos. A rocket propelled grenade struck the helicopter and all sixteen men were killed. At the time, it was the single largest loss of life for Naval Special Warfare since World War II. Erik chose to lead the rescue mission, although he was not required to do so as the Task Unit Commander. He embodied the Navy’s core values of Honor, Courage and Commitment and endeavored to care for his team to the end.