Would-be rancher Pat Brennan loses his horse in a wager and must ride the stagecoach. When three gunmen attack, Brennan and a wealthy female passenger are held for ransom in this tense Western classic!

Filmed in Technicolor in the Alabama Hills and in Lone Pine, California, it is one of the best Westerns ever made.

Pat Brennan hopes to own his own ranch in the mountains one day soon. He wants to buy a seed bull from his old boss, but instead, Brennan loses his horse to him in a bet!

Luckily, Brennan is able to hitch a ride with Rintoon, the stagecoach driver. Rintoon explains to Brennan that he will be traveling with newlyweds Willard and Doretta Mimms. Doretta is the daughter of the richest man in the state, and Willard is her father’s accountant. 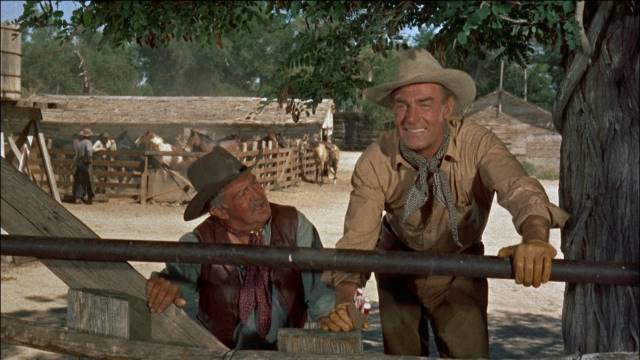 When the stagecoach stops at the way station, three ruthless outlaws attack them. Chink, Billy Jack, and their leader, Frank Usher, are cold-blooded murderers whose victims include the stationmaster and his little boy. When Rintoon reaches for his shotgun, Chink shoots and kills him, too.

Terrified, Willard tells the outlaws that instead of robbing them, they should demand ransom for Doretta. Frank agrees, and decides to keep Doretta and Brennan for safekeeping, while Billy Jack and Willard ride off to deliver a ransom note demanding $50,000 from Doretta’s father.

Willard returns with the news that his father-in-law is collecting the cash. Frank allows that coward to leave, and he does so without even looking back. Before he can get very far, Chink shoots and kills him.

Doretta is distraught, but Brennan tells her to pull herself together. He wants to run, but he likes Doretta too much to leave her behind. He’s certain that a lot of blood is about to be spilled.

The question is: how will he get them both out of this alive?