East of the Sierra Nevada, the mining boomtown called Bodie, California, once brought treasure and wealth to the lucky miners that called it home. Bodie began as a mining camp in 1859. One of the founding prospectors, W.S. Bodey, died in a blizzard while making a run for supplies, and the remaining prospectors decided to name the town in honor of him. The name went through a few different variations before they landed on Bodie. Located in modern-day Mono County, Bodie was one of the most populated mining towns before its vast decline.

In 1876, the discovery of a very profitable gold line brought prospectors and settlers to Bodie from all over in droves. Among those settlers was a big Chinese community, who influenced the culture with Bodie having its own “China Town.”

Miners found another source of gold in the Bodie Mines, and the population grew exponentially. By 1879, 10,000 settlers resided in the community. Although it was off the beaten track, Bodie had the presence of many businesses, including a bank, over fifty saloons, churches, schools, and a railroad, connecting it to the outside world. Unfortunately, crime was prevalent, and over the next few years, it gained a reputation for being unruly and dangerous.

In 1880, news of promising untouched gold mines in Butte, Montana, and Tombstone, Arizona, reached the town. Bodie suffered from its first decline, but it wouldn’t be its last. A blazing fire took out an extensive amount of the businesses in 1892, and many community members moved on to nearby boomtowns. When the biggest mine company in Bodie closed its doors in 1913, residents were scarce. With the railroad abandoned in 1917, by 1920, Bodie was down to 120 residents. A devastating fire in 1932 demolished most of the town, and by the end of WWII, the streets were empty. 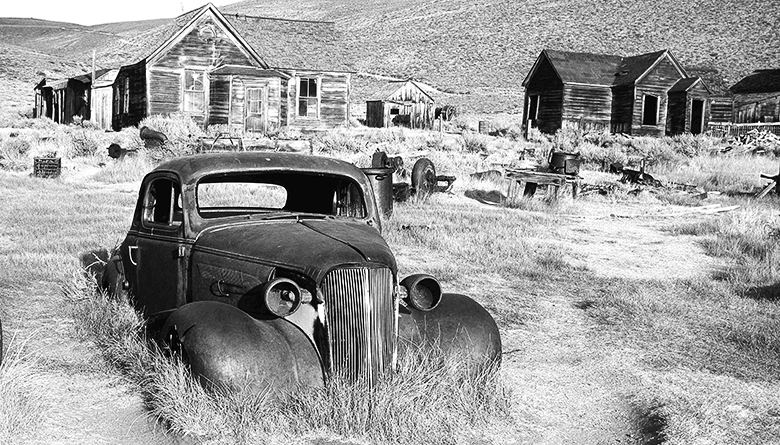 Bodie received recognition as a historical landmark in 1961 and a national state park in 1962. Today, the popular ghost town is open to the public, and over a hundred buildings still stand in a state of arrested decay.

Run-ins with spirits often occur throughout the town, from a knitting woman at the Gregory House to voices and screams in the mines. But certainly, the most interesting lore around Bodie is what happens when you take a piece of it with you. Known as the Bodie Curse, visitors who remove anything, even something as small as a rock from the ghost town, report experiencing devastatingly bad luck. More often than not, the thief returns the item to Bodie, along with a note of sincere apologies, in hopes of breaking the curse.