Bruce Boxleitner: What I Learned from James Arness

Bruce Boxleitner is busy, and not just with Westerns. True, the star of How the West Was Won has just completed a Western movie, The Warrant: Breaker’s Law. “But actually, I saddle Science Fiction as well.” The star of Tron and Babylon 5 has recently finished an episode of The Orville, Seth MacFarlane’s parody/homage to Star Trek.

“Jim Arness started the same way,” he points out. “He had a couple of great Science Fiction movies. He was very important in Them, and The Thing—The Thing’s still one of my favorite Science Fiction movies.” Of course, after that original exposure, as The Thing’s monster, “the intellectual carrot,” if there was any one individual who gave James Arness the break that made his career, it was John Wayne. First, Wayne put him under contract and gave him strong supporting roles. Then Wayne turned down Gunsmoke for himself; but when he talked CBS into looking at Arness for Matt Dillon, Jim didn’t want to do it. “I heard it from Jim that Gunsmoke was basically argued over a bottle,” Boxleitner remembers. “They imbibed a little, and Duke basically told him, ‘It’s a big break. You’re perfect for it.’ ‘But I want to have a film career!’ ‘You’re too damned big and ugly to be a movie star!’” 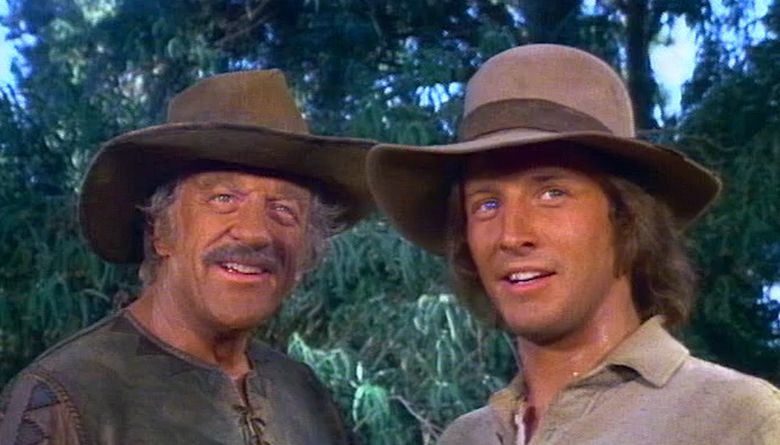 Boxleitner was just 26, when James Arness did for him what Wayne did for Arness. “I’ll always be grateful to James Arness, because he literally gave me a career.” He had actually appeared in the very last episode of Gunsmoke , but he’d never met Arness, because by the end of the show’s run, except for a cameo, Boxleitner explains, “he was rarely even there. It was mainly about whoever the big guest star was.” So, Arness knew nothing of Boxleitner in 1976, when he was preparing to star in How the West Was Won. As Arness told the Television Academy Archives, “We watched four guys in scenes from other shows. Hands down: there was just one guy that [was] right for it.” The President of ABC Television, Michael Eisner, had his own favorite. But it wasn’t Arness’ favorite, and he had full cast approval. “I knew that it was live or die at that moment, so I just said, ‘Well, I’m sorry, but I disagree with you. I want that third guy, Bruce Boxleitner.’ Bruce turned out to be a great choice for it; he was just right.”

Later, Boxleitner remembers, “Jim would always kid me, ‘We only hired you because those guys were way too short.’ I came up to here on him, and I’m six foot two, you know.” Arness and Boxleitner didn’t meet face to face until they were on-location, “In Kanab Utah, up there in Red Rock Canyon. It was amazing: tall as that man is, he seemed taller in real life. I was still a very green young actor, and he was friendly right away.”

Having played one character for a couple of decades, “It was so interesting because he was this new character. He didn’t have the limitations that were built in with Marshal Matt Dillon. He could be a bit nefarious when he had to deal that way. He got to cut loose with this rollicking mountain man all in buckskin.” After years of having to hide the results of his World War II injuries received at Anzio, “He got to limp, he grew his hair long, grew a mustache.” 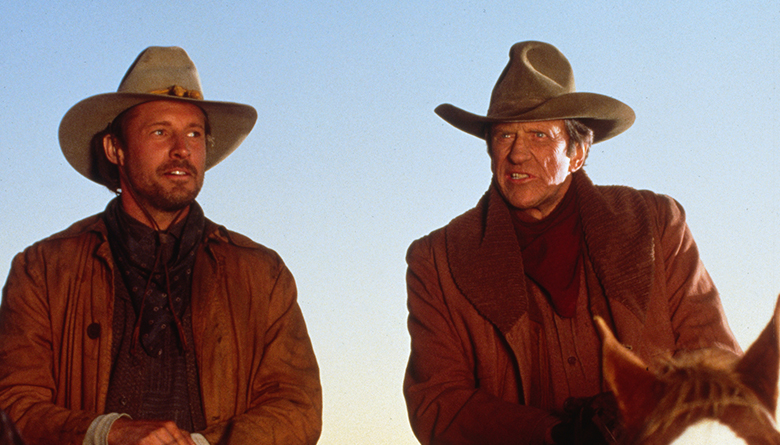 “He was my mentor, though he’d be embarrassed to hear that. But, by example, he was, and I learned a great deal of what it was to be a star of a television series, and what responsibilities came with that. It rests on you. When a show goes down, nobody blames the writers or the producers.”

One thing Arness did was to create an on-set atmosphere that made people want to be there. “He liked keeping it light. He liked a good joke—you could hear his high cackling laugh coming. You know, especially when you’re out doing a Western, everybody is going through the same thing. It’s the great equalizer: the stars are hot and sweaty, and uncomfortable like the crew people are. And you can make everybody’s day better if it trickles from the top. People are enjoying themselves, not like we hear so much of today, where everyone’s all inhibited because if they open their mouth, the lead actor’ll yell at ’em.”

Boxleitner remembers a typical occasion, shooting a dinner scene, “sort of a telling-the-plot type of scene.” The camera is on Boxlietner, “and Jim is across the way. And he’s reaching over and eating my food while I’m trying to talk! I always prided myself that you can’t crack me up, but he was just busting me up.”

Then there was the time, shooting the episode where youngest sister Jessie has been stung by a swarm of bees and is in a coma. Zeb (Arness) and Luke (Boxleitner) have brought her to the medicine man, Iron Eyes Cody, to try and save her. “We’re sitting by a campfire waiting—is she gonna live? Is she gonna die? Then you hear Iron Eyes—had to be a hundred years old by that point—chanting his incantations, and he starts a coughing jag. Well, Arness starts laughing, and you couldn’t get him back in character again for four more takes. Then I have to say, ‘Uncle Zeb, if Jesse dies I’m gonna kill you.’ Imagine trying to keep a straight face and say that with James Arness laughing in your face. It was near impossible.” 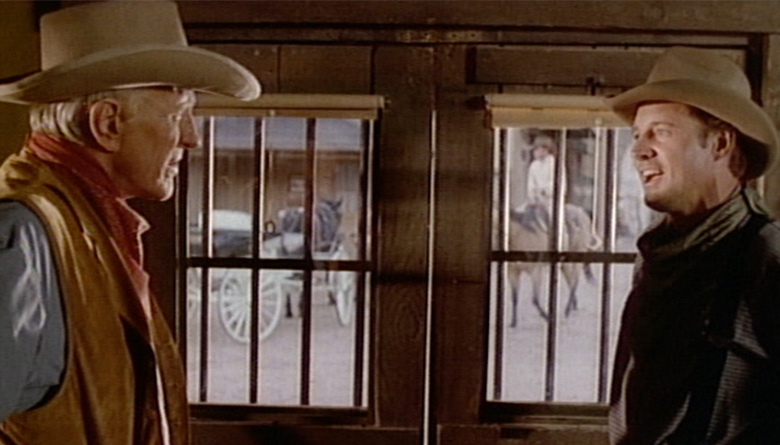 He was not the sort of mentor to lecture. “He’d say something out of the corner of his mouth, like ‘You want to loosen the reins a little, ’cause he’s bucking his head.’ He taught me an old trick, to close your eyes and face up into the sun. And then just before action, open your eyes. And your eyes are wide open before you start squinting. Of course, he had the squint down, didn’t he? He had that great menacing squint.”

How the West Was Won ended in 1979, and Boxleitner and Arness didn’t work together again for nine years, until the TV remake of Red River, “And the years in between were like a blink of an eye; nothing had changed. It was still the same relationship. I saw less of him between takes because he was having some trouble. He was just older and wanted to stay out of the heat. But around camera and working, nothing changed; that was the beauty of it.” Arness enjoyed his unlikable character. “I think he really enjoyed being able to be a real badass.”

In 1994, James Arness would play his very last role on film, his final performance as Matt Dillon, in the movie Gunsmoke: One Man’s Justice. The network wanted a Country singer to play Matt’s sidekick, Davis Healy, but Arness insisted on Bruce Boxleitner. “That last movie. I got gut-shot in that shoot-out. When my character died, I died in his arms. I’m very proud that I got to share that with him.”