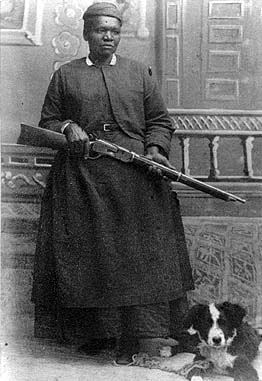 At six-feet tall, 200 pounds, toting a pair of six-shooters and a shotgun, smoking a foul homemade cigar, even the burliest man would think twice about getting into a fight with Mary Fields. The woman was fierce, feisty with a short, explosive temper that often led to fists flying and gunshots ringing.

Mary Fields was born a slave in Tennessee. As a free woman years after the Civil War ended, she sought a better life…and adventure. She worked on steamboats and at a convent in Ohio. When a group of nuns headed west to do mission work, Mary joined them on the trek to Cascade County, Montana. Once in the city of Cascade, she worked for the Ursuline nuns doing the heavy lifting they weren’t capable of. She chopped wood, did stonework, and rough carpentry. She was adept at hitching and driving horses and mules, so she would often go on supply runs to the train stop, or the cities of Great Falls or Helena. Though her temperament was hardly “holy,” she was known for her devotion to the nuns and her dedication to the students at the convent school. Her time at the mission came to an end when a male coworker complained that a woman—a black woman, at that—made $2 more per month than he. Patience not being one of her virtues, Mary confronted the man. The inevitable argument escalated to an all-out gunfight, with the man suffering a minor injury, and the Bishop’s clothes that were hanging on the line looking like Swiss cheese from all the bullet holes. It was the last straw. The Bishop ordered the nuns to let Mary go. Though the nuns appealed to the Bishop, arguing on Mary’s behalf, he wouldn’t budge, and they had no choice but to dismiss her. Mary was devastated. With the help of the Mother Superior, Mary opened a restaurant, but the business failed, because she couldn’t find it in her heart to turn away customers who couldn’t afford to pay.

Mary’s next job earned her the nickname: “Stagecoach Mary.” In 1895 she became the first African American to receive an independent contract with Star Route Carrier, to deliver the United States Mail, and the tough, determined woman found her calling.

Mary soon gained a reputation for delivering letters and packages in the harshest weather conditions, over the most rugged terrain, under harrowing, life-threatening conditions. Displaying the courage of a hero, she was known to fight off bandits to protect her cargo. Aboard her trusty mule, Moses, she trekked through icy blizzards and sweltering heat to get to isolated miners’ cabins or outposts delivering land claims and other important documents. Because she was so reliable getting mail to its destination, she was a key player in the development of the mostly lawless central Montana. She kept up this pace until she was in her late sixties, but the job took its toll, and she retired.

At age 70, she needed an income. She once again became a business owner, starting a laundry service from her home. Mary may have been a rough, hard-drinking, cigar-smoking force of nature, but, as she demonstrated when she had her restaurant, she also had a soft side. She was known for her kindness and affection for children and added babysitter to her illustrious life’s work. And as an avid baseball fan, she’d attend the Cascade team’s home games, distributing bouquets of flowers from her garden to any Cascade player who hit a home run.

A beloved and respected member of the Cascade, Montana community, locals often treated Mary to drinks and meals. “Stagecoach” Mary Fields died in 1914, at around the age of 82.