She was born Pearl Taylor in 1871 to wealthy, educated and religious parents in Canada. So how did this young lady who attended boarding school become known as the infamous and legendary “Bandit Queen?”

While at school, at age 16, Pearl fell hard for Frank Hart, a man with a reputation for being a gambler, a womanizer, and a drunk. Coming from a sheltered home, she was easily charmed by his tales of romance and adventure. The couple eloped, and soon Frank showed his true character, becoming cruel and abusive, a ne’er do well who could not hold down a steady job. Pearl stuck with Frank as they drifted from town to town, impoverished vagabonds. 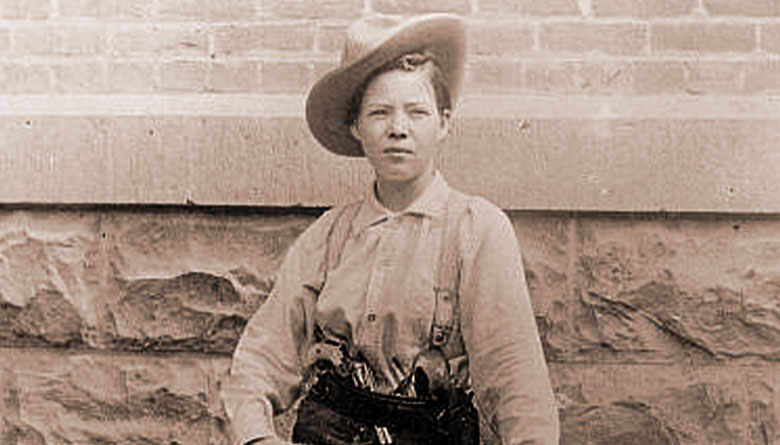 In 1893, she and Frank went to the Chicago World’s Fair, and Pearl had an eye-opening experience. Not only was she fired up by listening to women speakers impassioned about the Suffrage movement, but when she attended Buffalo Bill’s Wild West Show she became fascinated with the western and cowboy lifestyle. At the end of the Fair, Pearl left Frank and headed to Colorado. But when she discovered she was pregnant, she headed back home to Canada, to the source of her comfort during hard times—her beloved mother. She gave birth to a boy, but Pearl’s wanderlust could not be tamed by motherhood. She left her son to her mother’s care and took off for Arizona.

Pearl’s starstruck vision of an adventurous cowboy life eluded her. She was working as a cook when Frank tracked her down, and though wiser than the teenager who was once enamored by his fanciful tales, she still fell for his story of repentance and redemption. Pearl and Frank reconciled, and Pearl became pregnant again, giving birth to a daughter, but Frank hadn’t changed. Though facts are sketchy, one story has it that he beat her unconscious. Not surprisingly, she didn’t shed a tear when Frank took off to fight in the Spanish-American War. Pearl headed home, and like before, she became restless. Leaving her baby girl with her mother, she went back to Arizona to work as a cook in a mining camp, where she met German drifter, Joe Boot. The pair moved to Globe, Arizona and mined a claim for silver with no success.

In 1899, Pearl’s life took a devastating turn. She received a letter from home stating her mother was dying, and the family could not afford the medical bills. Neither she nor Joe had the funds to help, so the duo conned miners out of what little they had, but the money they stole not enough. They needed a big haul, and the scheme to rob the stagecoach traveling from Globe to Florence, Arizona took shape—and they pulled it off, though Pearl demonstrated a bit of remorse when she returned one dollar to each passenger before she and Joe galloped away. At this time in her life, Pearl had started cutting her hair short and wearing men’s clothes. Five days later a posse cornered the novice outlaws. Joe surrendered immediately. Surely, the sheriff must have been shocked when the other “guy,” who fought like a wild animal to avoid being taken in, turned out to be a woman. As news spread, she earned the title of “Bandit Queen.” During the trial, Pearl threw herself on the mercy of the court, saying she only robbed the stagecoach to help her frail, ailing mother. They bought it, and Pearl was acquitted. Joe, however, was sentenced to 30 years in prison, but escaped after serving just a couple of years. The judge had it in for Pearl. He had lesser charges brought against her, replaced the jury, and this time, she was found guilty and sentenced to five years.

By now, Pearl was famous. The press loved her. The public was fascinated by her. And she knew how to work the system, charming the warden, the guards anyone with influence to get a more comfortable cell and other privileges. She kept reporters and visitors entertained as she regaled them with tales of her short life of crime.

After just 18 months behind bars, Peal was paroled. It wasn’t long before Pearl’s moment in the spotlight waned. It’s believed Pearl remarried and lived out her life as a law-abiding citizen. She died in 1955 and is buried in Arizona.