Based in between the eerie Superstition Mountains and the dense Goldfield Mountains, Goldfield, Arizona, was established in 1893 after the discovery of high-grade gold ore. Nicknamed the “devil’s playground” by the Apaches, Goldfield is now a part of Pinal County’s Apache Junction,

Miners flocked to Goldfield with news of promising gold veins and the potential to make a fortune. Within the first year, around 1,500 settlers called the mountain town their home. By its peak, Goldfield’s population hit 4,000, and the town built an infrastructure to accommodate the growing community, including a hotel, general store, church, school, and post office. In 1897, the once prosperous gold veins began to run dry, the quality of the gold dropped. With no opportunity to line their pockets, the miners in the town moved along to the next town with lots of promise. After the miners departed, the rest of the residents followed, and by 1898, The Post Office shut its doors. By 1910, there were attempts to bring a boom back to Goldfield by opening mines back up, adding a mill, and a cyanide plant. Sadly, all attempts were not successful, and by 1926, Goldfield was a ghost town yet again. 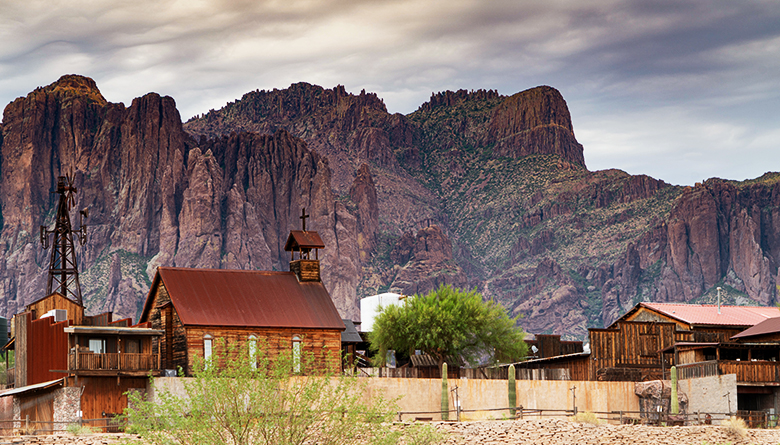 Goldfield stayed relatively abandoned for years to come except for the Youngberg community, which resided along with the ghost town. But in 1984, Goldfield began to come back to life when Robert F. Schoose and his wife, Lou Ann, bought the ghost town with plans to revamp it back to its original glory. Today, it is a tourist attraction that’s open to the public and features ghost and mine tours.

From the folklore and mystery of the Superstition Mountains to the ghost sighting in the town, the area of Goldfield is one of the most haunted places in Arizona. With over 20 seasons under its belt, the popular series Ghost Adventures visited the ghost town to investigate the supernatural activity in Goldfield on its tenth season. Various spirits are said to roam through the remnants of town, and countless visitors can back up the findings. At the saloon, you can hear sorrowful voices and spot a floating apparition behind the bar. A mysterious figure in a cowboy hat lingers at the bordello accompanied by knocks, bangs, unexplained noises, and some guests walk out with scratches. When it comes to the Superstition Mountains, urban legends run rampant. The curse of the lost Dutchman’s goldmine, reptile people, and the Borrego Phantom, a tall skeleton creature, make up the mystical lore surrounding the Superstition Mountains.