Named after the multi-colored mountain top of the Calico Mountains in the Mojave Desert, Calico, California was once booming, with over five hundred working mines in the area within years of the settlement’s existence. Founded by four prospectors in 1881 after the discovery of silver, the town became the newest destination for those chasing wealth. While the promise of viable silver mines kept explorers coming, the discovery of Borate Mineral Colemanite in what is now modern-day San Bernardino County helped the settlers thrive, but in the end, the town couldn’t survive.

By 1885, Calico’s population grew to 1,200 and showed no signs of slowing down. In 1890, Calico reached the height of its popularity, with over 3,500 residing in the remote town. Many businesses arrived to support the flourishing community, opening hotels, saloons, numerous general stores, a bank, and their very own newspaper, among others.

Although the year 1890 brought more and more settlers to the area, it was also the year that the demise of Calico began. The Silver Purchase Act of the same year significantly lowered the price of silver, and by 1896, the payout in that area wasn’t worth the risk to obtain it. As a result, all the miners were gone by the turn of the century, and few residents remained in the desolate town. When borax mining came to an end in 1907, it took the rest of the population with it. 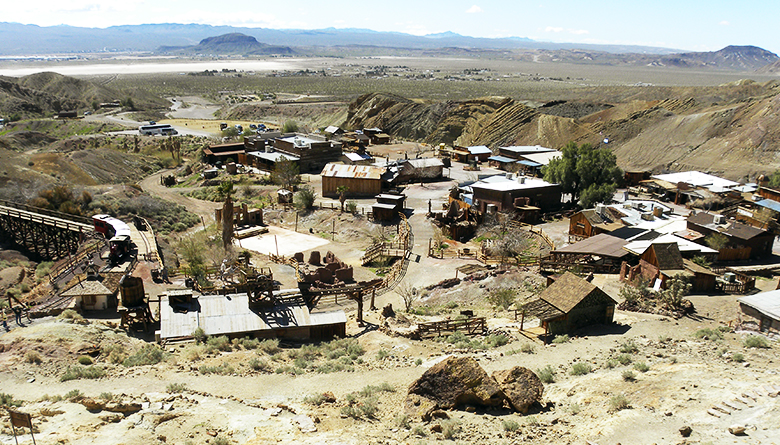 An attempt to recover unprocessed silver deposits and revitalize the town occurred in 1915, but it had little success. Calico remained a ghost town for the next few decades until finally, in 1951, Walter Knott purchased it from the only remaining mining company, Zenda Mining Company. Knott had created a fictional ghost town at Knott’s Berry Farm that was a success, so now, he wanted to do the same thing for the real thing. Investing in Calico, Knott restored many of the remaining structures to what they looked like in the 1800s. In addition, Knott removed buildings that were too far gone to repair and replaced them with Western-themed buildings to complete the Old West experience for tourists. In 1962, Calico became a California Historical Landmark, and in 2005, the state named it the Official State Gold Rush Ghost Town. Today, the ghost town is a tourist attraction that offers mine tours, gunfight stunt shows, gold panning, and more.

Considered one of the top haunted locations in California, Calico has its fair share of ghost stories. Lucy Lane, a resident who ran the general store alongside her husband and lived in Calico until she passed away, is a predominant spirit in the ghost town. Lucy is often seen in a black lace dress walking back and forth between her home and store. The spirits of past teachers and students watch from the windows of the schoolhouse, and onlookers often see a red ball of light moving throughout the schoolhouse. The last marshal of Calico, “Tumbleweed Harris,” keeps an eye on the town from beyond the grave, and visitors have spotted him on Main St. The hauntings don’t end there. Maggie’s Mine, Hank’s Hotel, and Calico Corral all have accounts of paranormal activity, and visitors have reported unexplained chills, their faces touched, and their clothes tugged.

Get in the know with all things Calico: https://parks.sbcounty.gov/park/calico-ghost-town-regional-park/