Were it not for a trip to Mexico with her older brother, Linda Cristal, beloved by INSP fans for her role as the strong and fiery, Victoria Montoya Cannon on The High Chaparral, might have become a nun.

On that fateful vacation, producer Miguelito Alemán spotted the young beauty, then known as Marta Victoria Moya, and offered her a small role in his latest film. Having studied voice and piano at conservatory, she was no stranger to the performing arts, and that part led to eight films with actor and producer Raúl de Anda, in which she changed her name to Linda Cristal.

In a 1960 article appearing in Look magazine, Cristal said of her early movie career,

“I never became a big star, but then I wouldn’t have been a big nun either.” 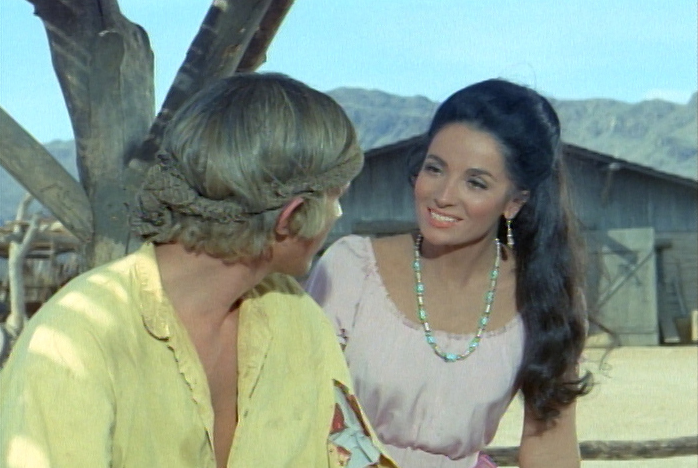 After making more than a dozen films in Mexico, she hit the Hollywood scene to make her first movies in English. She appeared in several films, took guest roles on television then auditioned for what would be a regular on a new series called, The High Chaparral. She knew the character of Victoria Montoya was independent, strong, passionate and smart, but the scene they asked her to read was sentimental, sweet and tender. So, she tossed the script, and improvised, showing a wide range of emotions and grit—instantly becoming the fiery Victoria Montoya Cannon, wife of Big John Cannon, who together would overcome hardship and danger to build a cattle empire. Linda Cristal got the part. In 1970, she won a Golden Globe for Best Actress in a Drama Series for her role on the show.

INSP fans also recognize Linda Cristal as Mexican aristocrat, Elena de la Madriaga, opposite James Stewart in Two Rode Together, and with John Wayne, as Flaca in The Alamo.

On June 27, 2020, Linda Cristal passed away at age 89, peacefully in her sleep, in her Beverly Hills home. She is survived by her sons Jordan and Gregory, and two grandchildren.