Established in 1992, 47 Ranch is a family-owned and operated, historic ranch powered by solar and wind. It is located on 25,000 acres of desert grassland and mountain oak woodland in Baja Arizona’s Mule Mountains between Tombstone, Bisbee and McNeal. Deb and Dennis Moroney raise Navajo-Churro sheep for their meat and wool, along with cattle and goats. They also raise the American Quarter Horses they ride to work the ranch. Like the rest of the livestock grazing their wide open spaces, the sheep are grass-fed and nurtured to maturity without the use of hormones, antibiotics or grain feed.

47 Ranch’s all-natural products are sold at various farmers markets, food co-ops and restaurants around the Phoenix and Tucson areas.

The Moroney’s are dedicated to conservation. In addition to using alternative power sources, they practice thoughtful range management and land restoration. In 2011, they won the Sky Island Alliance Conservation Business Award.

A Moment in American Sheep History: Don Juan de Oñate brought 2,900 sheep from Spain to the southwest in 1598. By the 17th century, Navajos had acquired Churro sheep herds through trades and raids. It was from churro wool that Navajos wove their iconic, patterned textiles. Navajo-Churro sheep wool is admired for its luster, silky hand, natural colors and durability.

Though these sheep are tough and adaptive to their environments, their meat is tender and flavorful.

In 1922, when businesses owned by women were rare, Chef Monica Flin, the daughter of a famous stone mason, defied convention and opened El Charro. She was the hostess, waitress and chef, and by a twist of fate, the inventor of the chimichanga! While cooking a snack for her nieces and nephews, one day, the kids became rambunctious, bumped into her and she accidentally dropped a “burrito” into a pot of boiling oil. When the oil splashed, she was about to utter a cuss word starting with “Ch,” but realizing the youngsters were in the kitchen, she quickly blurted “Chimicanga!” Not only was new culinary delight born, but it came with an instant name! Now, nearly a century later, the chimichanga is a staple on every Mexican food menu.

Cooking Tip: For the perfect, crispy chimichanga, submerge your carefully-folded burrito in the deep fryer for 4 minutes.

One of the many objectives of the Tohono O’odham Community Action group is to continue to train and empower Tohono O’odham youth in the skills needed to build a sustainable tribal food system.

The Tohono O’odham culture is traditionally an “Agri”-culture. TOCA is dedicated to creating a healthy, culturally vital and sustainable community on the Tohono O’odham Nation. As People of the Desert, cultivating drought-resistant crops is of major importance. Samantha Felix and Jesse Pablo share their knowledge of farming the hearty and tasty tepary beans.

Fact: The official heritage food of Arizona, the tepary bean has been around since 5,000 BC! That’s one hardy bean!

Emerson Fry Bread started out as a food stand at the Arizona State Fair by Lorenzo Emerson’s father and grandfather in 1967, solely to fund their band, The Salt River Reservation Band. After over three decades serving fry bread to hungry fair goers, the older men closed the stand after the 2001 season.

In 2011, Lorenzo and Roxanne Wilson brought back the family name and business, only this time they took it on the road in a brightly-colored food truck. Lorenzo is a culinary student and of the Prickly Pear Clan. He brings his Mojave, Quechan and Mexican-American roots to the Emerson menu, but it’s Roxanne’s full-blooded Navajo, of the Water Edge Clan, heritage that formed the foundation of Emerson Fry Bread. Today the dishes they serve are influenced by diverse cultures within their families, regional roots, and their tribal backgrounds. Emerson Fry Bread is entirely owner-operated and family-run, with Roxanne’s son making the dough daily, and Lorenzo and Roxanne on the truck creating and serving the food just the way customers like it.

Every menu item is handmade, fresh every day, sourcing their ingredients from local farmers, growing the Emerson Fry Bread business into a self-sustained, organic food truck, and the only nationally-known Native American food truck, an honor for which they take great pride.

On their website, Lorenzo writes, “I know you can come from the bottom…. That name up there is ours, that’s my family. I focus on that every day, because that’s what drives me.”

Fun Fact: Traditional Navajo Fry Bread is sweet, the basic deep fried dough with a choice of toppings such as powdered sugar and honey. 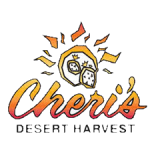 Tucson native, Cheri Romanoski grew up in a home with parents who loved preserving indigenous fruits that grew all around them. Making preserves was a family hobby and pastime.

Later, as an elementary school teacher, Cheri taught her students about the flora and fauna of the Sonoran Desert, and how Native Americans survived on what the earth had to offer. Soon she began to practice what she taught, picking the fruits growing on her property to serve all-natural, healthy preserves to her husband and three children. When she had leftovers, she shared with neighbors, who then brought unusual fruits to her from their own land for Sheri to preserve. Learning new techniques, working with a variety of fruits, Cheri broadened her experience enough to take her home hobby and grow it into a national and international business.

As well-known as she’s become, Cheri still sticks to the same methods she used when she started in 1985. She hand harvests each product, processes and prepares products in small quantities to ensure the their quality and integrity, using no artificial flavors, colors or preservatives—just nature’s finest, most delicious fruits and vegetables.