The aroma of fresh-brewed coffee wafts through the air, and soon a line forms for that all-important morning wake-up cup, perhaps accompanied by a to-go plate of bacon, eggs and a biscuit. Are you picturing a scene on a street corner in New York? Philadelphia? Seattle? Denver? L.A.?

Well, let’s put it on rewind. How about the American West, vast open spaces in the post-Civil War 1800s when long cattle drives became a necessity. Instead of men and women in business attire, envision men wearing second-hand wool pants, chaps, vests, loose cotton shirts, cowboy hats, boots and spurs, having camped overnight, hungry, and ready for another day of moving a herd of cattle closer to market. The center of their social life, their sustenance and all their survival needs was the chuck wagon, and there was no one more respected, and often feared, as most were notoriously surly, than the cook, usually called, “Cookie.”

Necessity is the Mother of Invention

The chuck wagon was invented by Colonel Charles Goodnight, a cattleman who, in 1866, along with his partner, Oliver Loving, prepared to drive a herd of 2,000 longhorns from Texas to Colorado. It would be a long, dangerous trek in rough country without the convenience of stopping at many towns along the route. So Goodnight got the idea to rebuild an Army surplus wagon with durable hard wood, and equip it with cabinets, cubbies, shelves, and drawers to hold food and utensils, a hinged worktop for meal prep, and a large water barrel on the side. Often, cowboys showed up for work with little more than the clothes on their backs, so there was also space for bedrolls, blankets, and slickers. 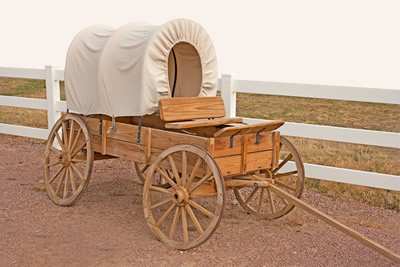 Since the cowboys referred to their meals as “chuck,” an English term that referred to good, hearty food, this new invention became known as the chuck wagon. It caught on, and was copied widely throughout the west. Studebaker Company and other manufacturers began producing chuck wagons, and selling them for, the then, steep price of $100.

The long cattle drive era lasted about 20 years and peaked in the 1880s, during which time many an entrepreneurial rancher made his fortune. But archive photos show cowboys out on the open range cooking and eating at the chuck wagon as late as the 1930s.

The crew on the cattle drive lived out in open country together, sometimes as long as five months, so disagreements were bound to happen. Given the cranky nature of most cooks, Cookie might have unpleasant words with the hands, on occasion, but if anyone from outside the drive should be so unwise as to insult or criticize the cook, the men would close up ranks in the cook’s defense. 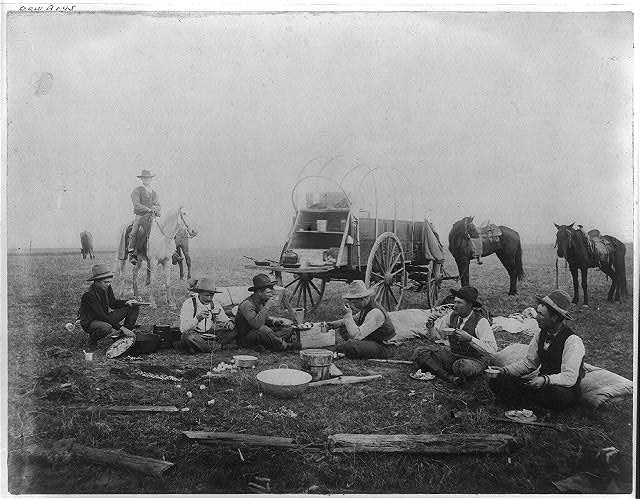 They were family. And they were loyal. Not that they didn’t have their own expressive names for the cook, depending on their opinion of him at the time—anything from “pot wrassler” and “bean wrangler” to the more opinionated, “belly cheater” or worse! But never would they dare call him these names to his face. In his presence he was “Cookie.”

The only man higher in rank on a cattle drive was the trail boss. While it was the cowboys’ job to take shifts monitoring the cows at night, keeping an eye out for potential unrest, stampedes, predators and rustlers, Cookie wasn’t called upon to keep watch, but his responsibilities went well beyond baking biscuits and serving up stew. He was the repairman, the entertainer, the counselor, the veterinarian, the doctor, dentist, barber, banker, and should a squabble among the hands occur, Cookie was right in the thick of it, acting as referee or arbitrator to restore the peace.

Life at the Chuck Wagon

While the cowboys took their shifts, Cookie got to sleep through the night, but morning came all too soon, way before most of the men would arise. Up at around 3 a.m., he had to grind the coffee beans, build a new fire, hook the large coffeepot to a pot rack suspended over the fire pit, and get it brewing.

When the flames were blazing, he would set out his heavy Dutch ovens and lids to heat. Now the pressure was on. While cowboys would be fools to defame the cook, the cook risked his reputation, respect and livelihood if he failed to get the men’s meals served on time. He was tasked to feed the crew three meals, every day of the drive, no matter the weather, the terrain, predators—animal, reptile or human—or his personal circumstances.

As the pots heated, he tossed a generous clump of beef fat into each, then headed to his work table, where he cut and salted steaks and formed a loaf of dough in a pan. When these were done, he dropped the steaks into the now hot Dutch oven, plucked off dough to make biscuits, dipped each one in tallow, and placed them in the bread oven in the cooking trench, put the lid on, and shoveled hot coals around and over the pot to bake the bread. 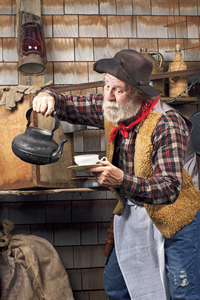 When the “chuck” or “grub” was ready, the cook shouted to the men, who after washing up, picked up tin plates, cups, knives and forks, and stood in line to get their share. There were no tables and chairs. The men sat where they wanted or could, on the bare ground, or on a bedroll, a log or rock, their laps serving as their trays or tables. Afterwards, they tossed their dirty dishes, utensils and cups into a large bin known as the “wreck pan,” and woe to the cowboy who did not.

As soon as the cowboys saddled up and took off, Cookie went into action, washing and drying the dishes, storing the bedrolls, wrapping the Dutch ovens in burlap bags and stowing them, along with the racks, in the boot. Other utensils, he hung on the side hooks and hangers. Next he would hitch up the mules and move out to find a good spot for lunch, but as he trekked to the new location, he, and sometimes even the cowboys, would always be on the lookout for kindling to light his fires, and when he found some, he’d store it in a compartment under the wagon called the “Possum belly.”

Cookie would find a good spot to set up for lunch, and was already planning the evening meal, and if he was good at his job or was simply in a good mood that day, he’d use his imagination and change up the usual salted beef with a soup or stew, whip up a rice pudding dessert, pastry or pie made from dried fruit to give the men a much-needed treat.

After the trail boss decided on a good site to spend the night, Cookie would get ready for supper. He’d dig his fire trench, set up his racks, and put the coffee on. If necessary, and only with the permission of the trail boss, he’d slaughter an inferior steer for the next few days’ meals.

The evening camp was for sharing stories, relaxing, renewing energy, and if the drive was lucky enough to have a cowboy with musical talent, they’d enjoy a song or two. But sunrise would come around soon enough, and after a bit of social time, the men who were not on night watch, slipped into their bedrolls for well-deserved sleep, as did Cookie, who had already prepared for breakfast. 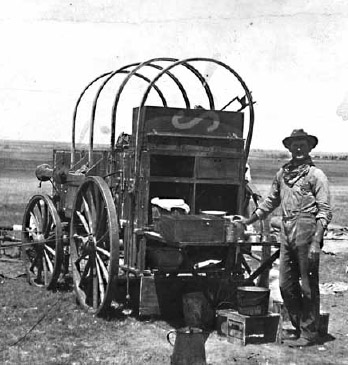 In addition to beef, some of the staples in Cookie’s “kitchen” included flour, sugar, salt, pepper, bacon, dried pork, molasses, dried fruit, potatoes, pinto beans, rice, cornmeal, grits, baking soda and powder, vegetables, in particular, onions, and the all-important, sourdough starter for making bread. It was essential that the sourdough starter be kept warm, so if the weather turned cold, you would see Cookie clutching the container to his body.

If the drive passed a farm along their route, Cookie might be allowed to trade a steer, or find something else to barter for fresh eggs, or vegetables that were in season.

But no matter what was in the skillet or oven, the coffee pot was always on, and the men would partake of it freely. It was hot and they drank it black, called “Six-shooter” coffee because, legend has it, the coffee was strong enough to float a revolver!

The End of the Drive

As railroads began to stretch across the growing nation, cattle were shipped to far-off destinations in stock cars, and the long drive through rugged country became a part of history. 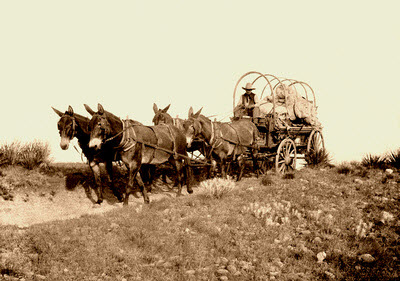 But today the legend lives on. Just as battle reenactments and living history events bring a sense of our nation’s past to life, the chuck wagon, too, has its aficionados who revel in nostalgia for the cowboy way.

Rodeos, predominantly in Western Canada, sometimes feature chuck wagon races. Various organizations sponsor chuck wagon cook-offs and restoration shows, and some ranches and tourist destinations hold chuck wagon suppers for vacationers and others who want to get in touch with their inner cowhand.

In its own way, the chuck wagon is a testament to America’s ingenuity, individualism and the very spirit of a country on the brink of rapid change.

Now, fast forward to present day! The next time you’re contemplating lunch at one of many food trucks, perhaps, deciding between a meatball hero, bean burrito, chicken curry or lamb gyro, consider yourself a part of the great chuck wagon legacy.