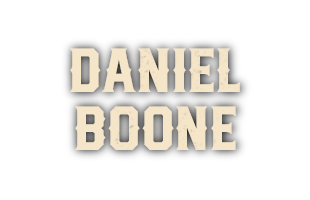 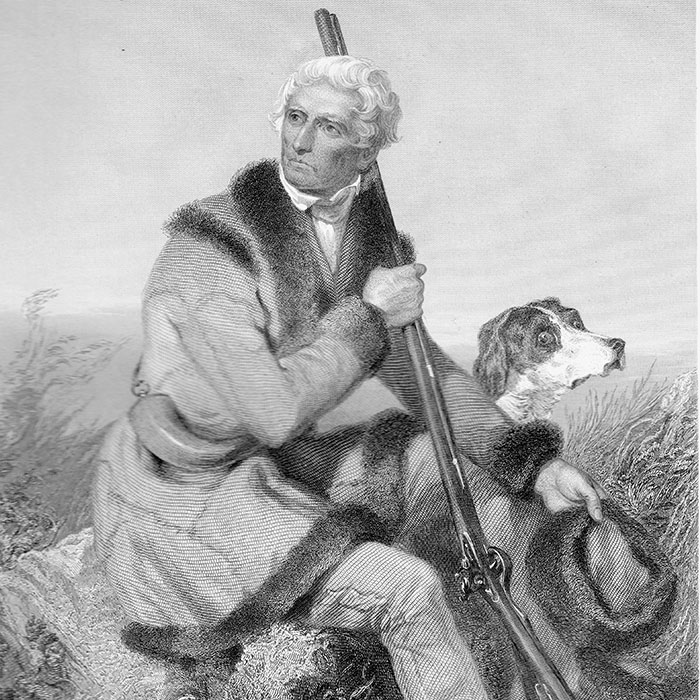 Daniel Boone was born in Pennsylvania on November 2, 1734, the sixth of eleven children. By age 12, Daniel was such a skilled marksman that he provided most of the food for his family.

In 1750, his father moved them to the Yadkin River Valley in North Carolina, where Daniel became a professional hunter in the Appalachian Mountains. He learned tribal ways, languages, and laws and served as an intermediary between Europeans and Native Americans. His reputation as a frontiersman spread. In 1756, Daniel married Rebecca Bryan and would eventually father 10 children—but Rebecca and the kids were often left on their own, as Daniel’s hunting and trapping expeditions kept him from home, sometimes for months. As a militiaman during a Cherokee uprising, he was gone for over two years.

With more and more settlers moving in, Daniel relocated his family several times over the years so he could make a living as a trapper and hunter, but he was often in debt, thanks to foolish business deals.

A major break came when a rich landowner hired Daniel to blaze a road to the new frontier, and he established The Wilderness Trail that stretched through the Cumberland Gap into central Kentucky. By the end of the 18th Century, more than 200,000 settlers had followed that trail to a new life. There, Daniel built a settlement he called Boonesborough and brought his family to the new home that bore their name. But trouble was never far from Daniel. A band of Shawnee and Cherokee men kidnapped his daughter Jemima and her girlfriends. Daniel led a posse that managed to track them in the wilderness and they drove off the girls’ captors. Adventures like these, and many other tales of daring feats, often exaggerated, fueled the myth of Daniel Boone.

While Daniel Boone was credited with opening the frontier to settlers, his lack of business skills prevented him from reaping the rewards of his trailblazing accomplishment. He failed as a land speculator, lost the title to his Kentucky and other properties, and spent much of his life in debt. In 1799, he moved his family, once again, this time, to Missouri, where he spent his final years. Rebecca died in 1813, and Daniel died seven years later, on September 26, 1820.