Fugitive Stretch Dawson and his bandits stumble into a ghost town to discover only a young woman and her eccentric grandfather stand between them…and gold. Stretch agrees to share the treasure, but his cohorts disagree. Bullets will fly!

James “Stretch” Dawson and his band of outlaws are on the run following a heist in an Arizona bank. They head for the badlands, where they finally stumble in from the salt flats to a menacing ghost town. This forbidding place is empty, except for a pretty but hostile woman named Mike and her eccentric grandfather. 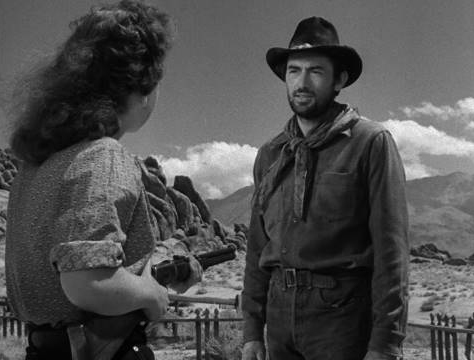 While Stretch seems distracted by Mike, one of his men, Dude, takes off to look around. When he returns, he tells the gang that the old man is mining for gold.

The next day, Mike and Grandpa head for the hills. While Stretch and Dude fight over who will lead the gang, Mike starts shooting at them. She only stops when a ricocheting bullet hits Grandpa, and she must surrender.

Grandpa offers to split the gold 50/50 with Stretch and his men. But some of them clearly have other ideas. Stretch assures Mike and Grandpa that he will keep their bargain and split the money fairly – which Dude overhears. The next day, as the gang starts digging up the gold at the mine, a large band of Apaches appears.

When Stretch finds Grandpa in town, he is reassured when Grandpa says he told his Apache friends to go back to the reservation. Grateful that Grandpa didn’t tell the Apaches to wipe his gang out, Stretch tells his men that they must share the gold.

However, Dude and his fellow outlaws have other ideas…and the bullets begin to fly.

Now, Stretch must find the courage – and the brains – to outlast his greedy gang and keep his word…

John Ford Behind the Lens: Two Rode Together