Jeff Chandler always knew he wanted to be an actor and he worked hard to make his dream come true. From his celebrated role on the radio show Our Miss Brooks to his Oscar-nominated performance as Cochise in Broken Arrow and beyond, Jeff Chandler was a dedicated Hollywood professional.

Born in Brooklyn in 1918 to Anna and Phillip Grossel, young Ira (as he was known back then) went to school at Erasmus Hall High School and took part in many school plays while working as a cashier in a restaurant. He wanted to study drama, but art school was cheaper, so he studied art for a year and got a job as a layout artist making $18 a week. 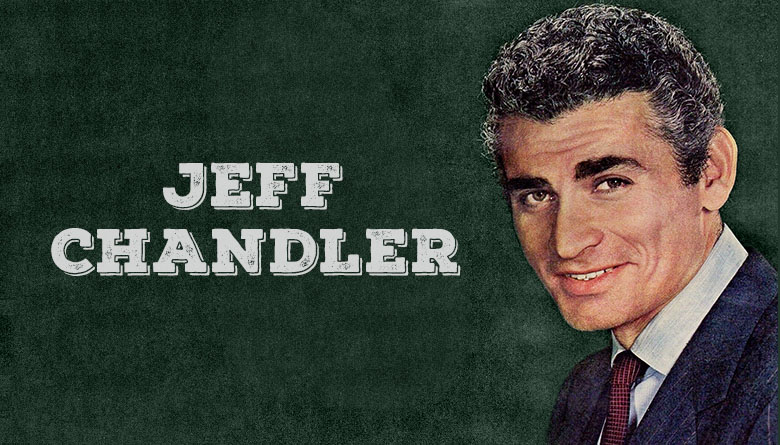 Once he saved enough money, he took a drama class, got a job in radio, and then a stock company job on Long Island. In 1941, Ira formed his own company – The Shady Lane Playhouse – located in Illinois. The company staged successful plays throughout the Midwest.

But when World War II broke out, he enlisted in the Army. For four long years, he served mostly in the Aleutians, and was promoted to the rank of Lieutenant.

After the war ended, he took every penny of his savings (about $3,000.00) and went to Hollywood. While on his way to a screen test a short time later, he was involved in a serious car accident that left him with a permanent scar on his forehead.

Now known as Jeff Chandler, he stood 6’4” tall, weighed 210 pounds, and sported the wavy, prematurely gray hair he’d had since high school. The scar on his forehead added to his tanned and rugged good looks. When Chandler’s savings ran out, he worked at several radio acting jobs…and none were bigger than his role as Eve Arden’s boyfriend on the hit radio show, Our Miss Brooks.

Chandler got his first big movie break in 1949 when he played an Israeli leader in Sword in the Desert. Universal Pictures was so impressed with him that they gave him a 7-year contract…and in 1950, he had his breakout role in Broken Arrow. For his performance as Cochise, Chandler was nominated for an Oscar – and stardom soon followed. 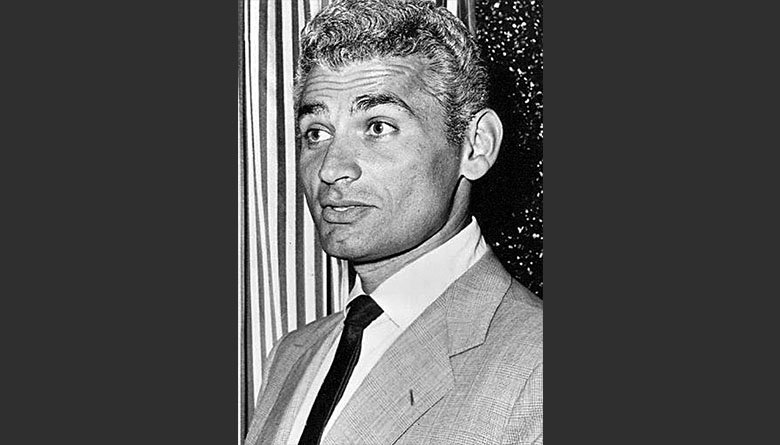 The 1950s saw Chandler’s popularity soar. He played Cochise again in The Battle of Apache Pass and Taza, Son of Cochise. His versatility and unique looks gave him the ability to play many different roles, so he was cast in Westerns, Crime Dramas, and elaborate Costume movies.

Popularity Comes at a Price

The pace of his schedule and Chandler’s multiple projects took a toll on him. He was in 48 movies in a span of 12 years, worked on multiple radio shows, was a singer/songwriter, and producer – all at the same time! During this decade, he walked away from Our Miss Brooks because he said he needed to “get a rest.” His marriage suffered and ultimately, ended in divorce. His status as Universal’s top leading man took a hit as another leading man – Rock Hudson – eclipsed him.

Chandler began to fight with Universal because he felt he was being overextended. He turned down the lead role in Six Bridges to Cross and was suspended by the studio. For his next move, Chandler headed to Las Vegas to sing in nightclubs. When he returned, he patched things up with Universal, but still refused some roles. Eventually, he got back to work and completed many movies, including The Spoilers, Away All Boats, Pillars of the Sky, and Toy Tiger.

In 1956, he formed a production company, Earlmar, and produced a movie called Drango. In the next few years, Chandler completed more movies such as The Tattered Dress, Man in the Shadow, The Lady Takes a Flyer and The Jayhawkers!

Gone But Not Forgotten

Jeff Chandler worked tirelessly throughout the decade and into 1961. But while shooting Merrill’s Marauders on location in the Philippines that April, he hurt his back playing baseball.

Seeking relief from the pain, Chandler returned to Culver City, California in May for surgery to fix the herniated disc in his back. Tragically, one of his arteries was damaged, leading to severe complications. After multiple operations, transfusions, blood poisoning, and pneumonia, Jeff Chandler passed away on June 17, 1961. He was only 42 years old.

While he left us far too soon, Jeff Chandler’s work speaks for itself. Handsome, rugged, and charming, Chandler was internationally renowned as a great leading man in his Hollywood heyday. Thankfully, we can still watch his movies today and discover all there was to love about this Brooklyn-born Hollywood star.