Engineer Edward Creighton is on a mission to build a cross-country line for Western Union. But, deadly forces are opposed and conspire against him – possibly from within his very own crew!

Randolph Scott, Robert Young, and Dean Jagger star in this action-packed Western. Inspired by a story from Zane Gray and directed by Fritz Lang in glorious Technicolor, it’s an entertaining movie from beginning to end.

While surveying a telegraph line in 1861, Western Union engineer Edward Creighton is severely injured. He is found by outlaw Vance Shaw who is on the run from a posse and traveling on foot. Shaw briefly considers stealing Creighton’s horse, but instead, decides to save his life.

After Creighton recovers, he returns to Omaha and begins the construction of a telegraph line that stretches all the way to Salt Lake City. However, his plans are met with opposition to the installation of this line from many, including Confederate soldiers, Indians, and outlaws. 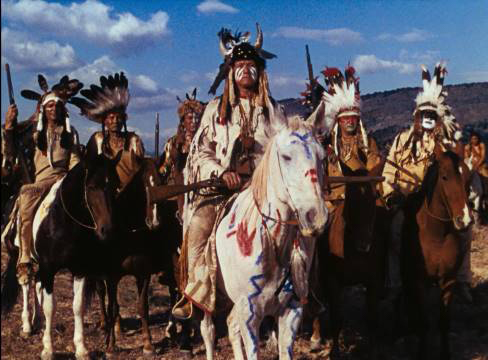 In need of support, Creighton asks for help from his sister, Sue, and hires foreman Pat Grogan and assistant Homer Kettle. When Vance Shaw arrives looking for honest work, Grogan hires him as a scout. Creighton believes he can trust Shaw, so he gambles on him.

Creighton also hires a Harvard-educated engineer named Richard Blake. Blake competes with Shaw for the romantic attentions of Sue—until the real work on the line begins.

Soon enough, trouble comes calling when one of the men is killed by an unknown band of Indians. Shaw doesn’t believe the Indians are to blame, so he rides out to investigate. Soon, he discovers that it’s not a gang of Indians who are responsible…it’s his old gang disguised as Indians!

Not wanting to turn in his old friends, Shaw lies to Creighton. But as the lies continue to pile up – and the disruptions to the line mount – Creighton begins to suspect that Shaw isn’t telling him everything…