When false allegations about wrangler, Ben Lane, being a horse thief surface, gunslinger Frank Jesse saves his life. Later, the two men meet Kelly, who hires them to escort her through hostile Indian territory to reunite with her husband. But Kelly has a secret, Frank has a devious plan, and Ben must figure out which one to trust with his life.

“I got myself a policy: never do an honest day’s work unless it’s absolutely necessary.”– Frank Jesse

When professional wrangler Ben Lane loses his horse to lameness while riding in the desert, he starts walking, hauling his saddle and gear. During his trek, he sees a herd of horses. After lassoing one and training it, he soon learns that though the horses are wandering free in the desert, they are not wild. Now the owner and his men track Ben down, and accuse him of being a horse thief. 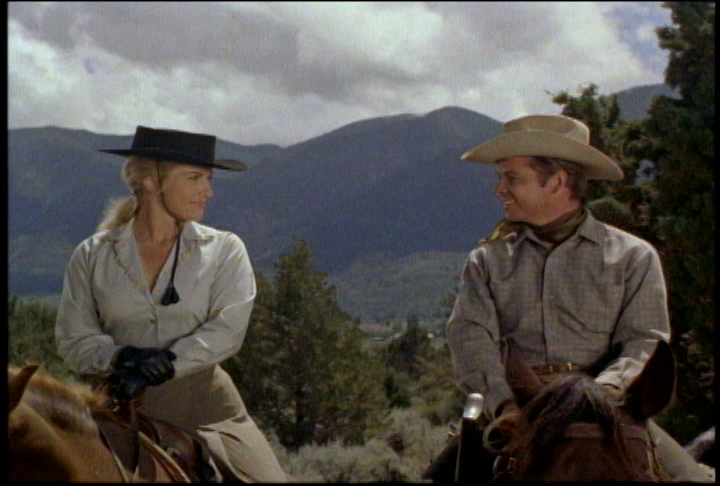 When frontier justice rules, they hand down the accepted sentence for poaching another man’s horse: death by hanging. As the rancher and his cohorts are about to carry out their dirty deed, gunslinger Frank Jesse rides up and saves Ben from the noose. Now, Ben and Frank travel together to the town of Perdido, becoming buddies along the way.

In town, they meet an alluring woman named Kelly. She approaches the men with an employment proposition they can’t refuse—five hundred dollars each to escort her through hostile Apache territory, to reunite with her long lost husband in Santa Rita del Cobre. That fortune will be hard-earned, as the journey is rough, dangerous and it’s likely they might not survive an Indian attack.

Frank has a violent past, a hired gunman, who would kill any man if the price were right. He knows the days are numbered for a man like him. He reveals that when he takes the bullet that ends his life, he wants to go out in style, his casket in a fine coach, drawn by six black horses, decorated in plumes, as they transport his body to Boot Hill for burial. This, he says, is a way to “slam the door shut on the past.” For now, however, he has other ideas, and Kelly’s five hundred dollars is just the beginning.

Kelly, too, wants to reconcile her past, having suffered a harsh life, and now she harbors a dark secret that fuels a vengeful plan, she intends to carry out during their journey.

As the travelers go on their way, Ben becomes smitten with the stunning Kelly, though he can’t help but feel both Frank and Kelly are hiding something. Now, as Indians attack, Ben has to decide which one to trust with his life.