US Marshal Morgan knows who brutally murdered his wife, and where the killer lives. Now, he heads to the corrupt town of Gun Hill, where an old friend wields evil power. But Morgan vows to take the murderer to justice, just as his friend vows Morgan will never leave town alive.

Marshal Matt Morgan: I remember you saved my life. But he took a life! He killed a woman! Just for the fun of it! Just…

Marshal Matt Morgan: My wife or somebody else’s makes no difference. I took an oath for this job. The oath says bring him in. That’s what I’ll do.

Catherine Morgan and her 9-year-old son, Petey are returning from the Indian reservation where they were visiting her family when she notices a pair of unmounted cowboys loitering in the woods, guzzling whisky. She senses trouble so she keeps an eye out and urges the horses forward. Her instincts are correct as the shifty men mount up and give chase.

Now at full gallop, Catherine’s wagon is rocking perilously over uneven ground, and the men are riding flat-out next to her. She lashes out with her carriage whip and slices the face of one of the men to the bone then cracks the whip to hasten the horses, but at that speed on rough ground, the wagon topples and Catherine and Petey are thrown from their seat and fall to the ground. The cowboys pull up their horses, dismount and make their way to Catherine. She knows what they have in mind, so she begs Petey to run, to escape, to get help. While the men turn their attention to Catherine, Petey steals one of their horses and gallops home to the nearby town of Pawlee, where his father, Matt Morgan is the town Marshal.

Marshal Matt Morgan has a reputation for being quick on the draw and quick to see justice served by upholding the law. He is not one to mess with. When Matt sees his son gallop into town, he rushes out, but the boy is traumatized and makes no sense. Matt mounts the horse with the boy and they return to the site of the overturned wagon. There Matt encounters a heartbreaking scene, his beloved wife, brutally assaulted and lifeless, sprawled in the dirt. 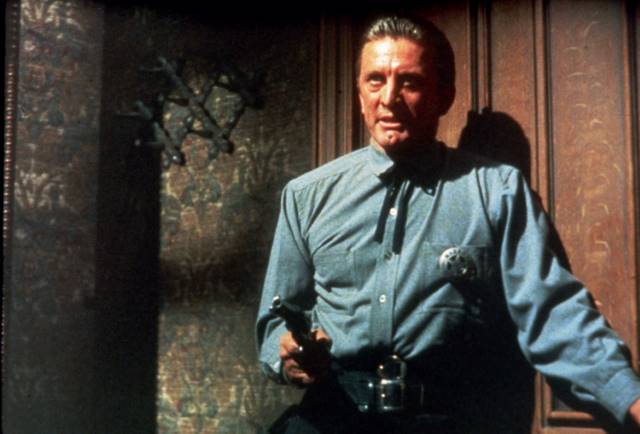 When he carries her body back to the stolen horse, he notices the saddle, the finely tooled leather and the initials “CB” engraved into the unique, ornate design. It’s a saddle he knew well in the past, owned by his old friend Craig Belden, a wealthy cattle rancher. Now, he knows exactly where to look for his wife’s killer. Matt learns that Catherine had slashed the face of one of the murderers.

Armed with his badge, a gun and just two clues, Matt takes the saddle and boards the train to Gun Hill. On the train, he meets beautiful saloon girl, Linda. She recognizes the saddle, and without mentioning she’s Craig’s girlfriend, she warns Matt that Craig is a cruel and powerful man and that he controls the town with his henchmen, who do his bidding.

When Matt arrives at Craig’s ranch, Craig is surprised to see his friend, but thrilled that his expensive, prized saddle is back, thinking that Matt has caught the horse thieves, a story his son Rick conjured up to explain the missing saddle.

Craig’s tone changes, however, when Matt reveals whoever rode in that saddle murdered his wife, and that the killer has a cut across his face. Craig realizes the truth and commands Matt to leave town, but Matt has a mission to see justice served.

Now, Matt is one man alone against an entire town crippled by fear of Craig Belden. Even the sheriff is a coward, refusing to uphold the law. As Matt searches for Craig’s son Rick and his accomplice Lee Smithers, one person has a change of heart, and Matt just might get the killers on the last train out of Gun Hill, but not without a gun-blazing, heart-racing fight.

In the final showdown, the script directed Marshal Morgan (Kirk Douglas) to beat Lee Smithers (Brian Hutton) to the draw in a gunfight. However, Hutton kept drawing first on Douglas, take after take. Ultimately, they decided that Douglas’ character would simply use his shotgun to shoot Smithers, settling the awkward situation.

Later, Douglas took Anthony Quinn aside and said, “Can you imagine that upstart beating me to the draw?”

“Don’t worry about it, Kirk,” Quinn said, “We’ll get him in the editing room.”

The True Rags to Riches Story of a Hollywood Legend