You’ll Not See Nothing Like the Mighty Quinn!
By Henry C. Parke

Yes, Bob Dylan wrote those lyrics about Anthony Quinn, and his portrayal of the Eskimo hero in the 1960 film, The Savage Innocents. And it’s true, you’ve not seen nothing like Quinn’s six-decade career. From his Oscar-winning performances in Viva Zapata and Lust for Life, to Zorba the Greek, he was never typecast. And that’s what’s so remarkable about his work in westerns: in nearly twenty films, he played very different characters.

Considering his forebears, Quinn seemed destined for a western film career. His grandfather, Francisco Quinn, had come from Ireland to help build the Union Pacific Railroad. Anthony’s mother, Manuela Oaxaca, was the child of an Indian house-servant. Her father was the nephew of one of Mexico’s wealthiest landowners. When Anthony was born, in Chihuahua, Mexico in 1915, his father, also Francisco Quinn, was off fighting with Pancho Villa.

Quinn got his break in 1936, when he answered a Paramount casting notice for The Plainsman. Overstating his Indian DNA, he claimed to be a full-blooded Cheyenne, and fluent in the language: he spouted gibberish to prove it and got the part. When he refused to take direction from notoriously dictatorial Cecil B. DeMille, he would have been fired, had not the film’s star, Gary Cooper, come to his defense. It was a mighty unusual introduction to his future father-in-law, as Quinn later married Katherine DeMille. Seventeen years later, Quinn would be on-location in Mexico, shooting Blowing Wild with Gary Cooper when they learned that Cooper had won an Oscar for High Noon, and Quinn for Viva Zapata!

He specialized for a while playing real-life Indians, memorably Crazy Horse, opposite Errol Flynn’s Custer, in 1941’s They Died with Their Boots On. In 1944 he was Yellow Hand to Joel McCrea’s Cody in Buffalo Bill, and in 1953 played Osceola opposite Rock Hudson in Seminole. 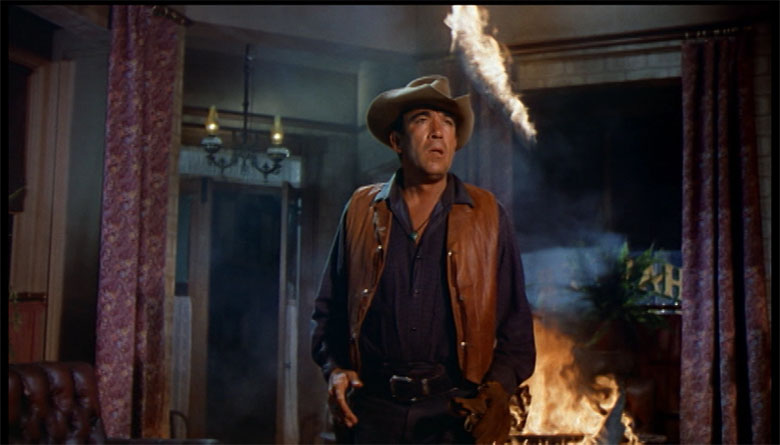 In 1942, in the powerful The Ox-Bow Incident, a mob is eager to lynch Quinn and Dana Andrews for murder, without being sure they have the right men. Quinn proves the better man, when others are squeamish, by removing a bullet from his own leg. Henry Fonda is among the few who want to wait for a trial, and 17 years later they would star together in Warlock. Perhaps inspired by the friendship of Wyatt Earp and Doc Holliday, Fonda is the lawman-turned-hired-gun, and Quinn is his game-legged wing-man whose idolatry threatens to destroy them both.

Some of Quinn’s finest western portrayals were in smaller-budget, more intimate films. In 1956’s The Man From Del Rio, he’s made sheriff after he outdraws a villain, but only Katy Jurado sees him as anything but cannon fodder. In 1957’s The Ride Back, Quinn plays an accused killer whom lawman William Conrad is trying to bring back from Mexico for trial: a fascinating two-man character study, expanded from a Gunsmoke radio script, in which Conrad, radio’s Matt Dillon, had starred.

In 1959’s Last Train from Gun Hill, he’s a powerful rancher who realizes that the man who killed the wife of his best friend, Kirk Douglas, is Quinn’s own son, played by Earl Holliman. It was the second time he’d played Quinn’s son, Holliman remembers, “And he said, ‘If we do this again, I’m putting you on an allowance.’ He had a delightful sense of humor. He was kind of big and open, and I was a little quieter. He said, ‘You underplay me even in real life!’ He was a very good actor; I loved working with him.”

The one western he wanted to make, but didn’t, was The Magnificent 7. Both he and Yul Brynner had thought Akira Kurosawa’s Seven Samurai would make a great western, and together purchased the rights. But, Quinn wrote, “Brynner would dupe me from my share of the picture and go on to make The Magnificent Seven without me. I never forgave him his trickery.”

Twenty years after his death, Quinn is remembered for his wonderful performances, his exuberance, and among those who knew him, his kindness. In his final western, Deaf Smith and Johnny Ears, Quinn played deaf frontiersman Erastus “Deaf” Smith, who fought for Texas independence. Franco Nero played his hearing crony.

“He adopted me as a son when my real father died in 1984,” Nero recalls. “He said, ‘Don’t worry. From today on, I will be your dad.’ And so, from that day I called him dad and he called me son. It was a great relationship.”