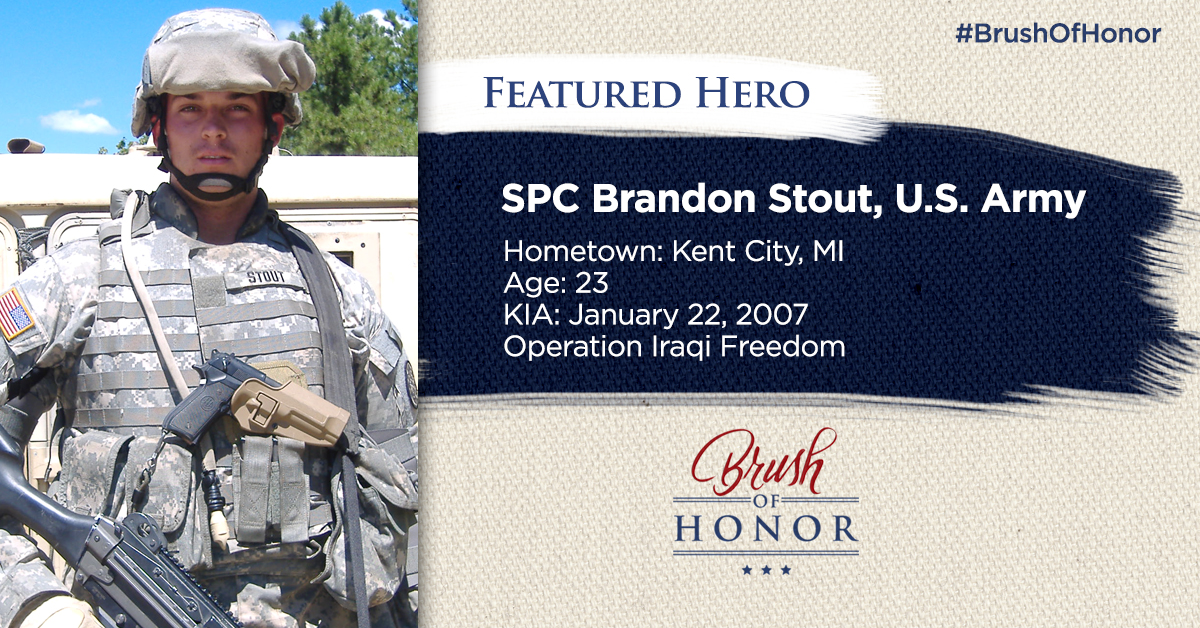 In Honor of Brandon Stout

Brandon Stout was assigned to the 46th Police Company, Michigan Army National Guard in Kingsford, Michigan. On January 22, 2007, at age 23, Stout was killed in Baghdad, Iraq during Operation Iraqi Freedom.

Brandon was born in Michigan. He joined the National Guard after graduation, in 2003. The 20-year-old wanted his life to be about helping others embrace their paths, and he wanted to serve his nation as a military chaplain. However, he was recruited as Military Police based on need, and would eventually serve his country in response and rescue after Hurricane Katrina. Brandon embraced the unexpected Military Police assignment with his characteristic optimism. He believed it was God’s plan for him to become a Military Policeman so that he could better relate to his fellow soldiers when he finally fulfilled his dream of becoming a military chaplain. In May 2005, Brandon married Audrey.

On January 22, 2007, while deployed to Iraq, Brandon was driving a Humvee that was returning from Baghdad Airport to Camp Rustimiah, their Forward Operating Base. Michelle Rudzitis was part of his platoon. At about 6 pm, the convoy slowed to a stop, and an instant later the platoon was hit by a roadside explosive force projectile. Brandon and an interpreter from Iraq were killed, immediately, in the blast. Michelle, and Brandon’s other friend and team mate, Derek Gagne, were severely injured.

He is survived by his parents, Tracy and Jeff, and William and Tammy; a brother, Adam; a half-brother, Andrew; two stepsisters, Stephanie and Kristina, three half-sisters Elizabeth, Stephanie and Callie; his grandparents, and his wife, Audrey.