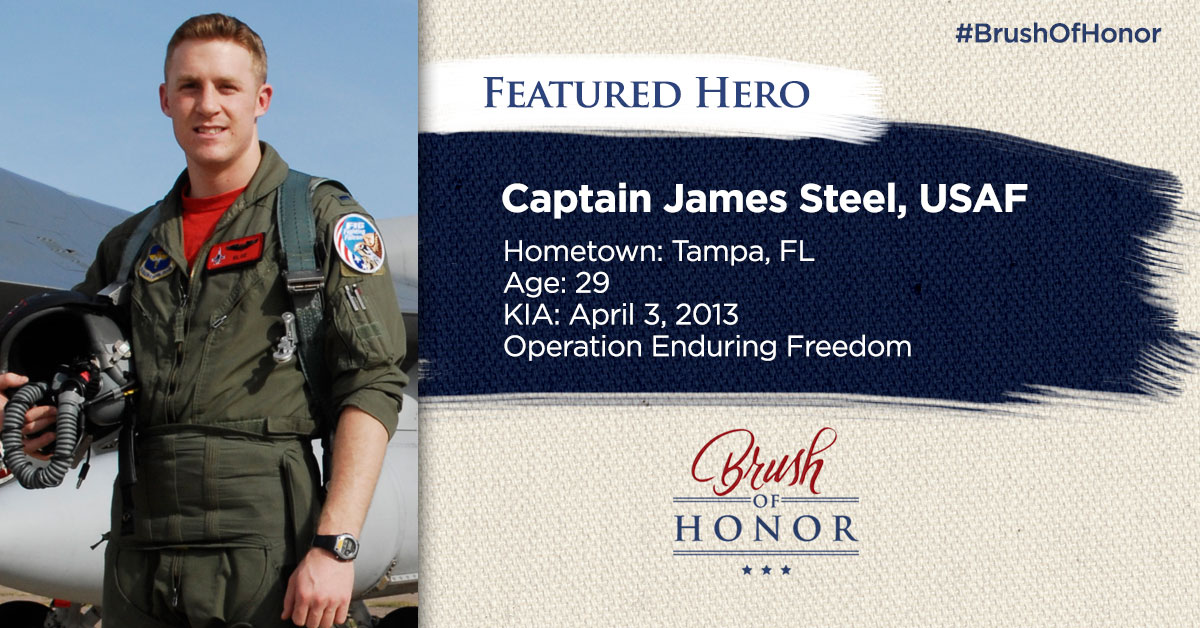 In Honor of James M. Steel

James Steel was assigned to 77th Fighter Squadron, Shaw Air Force Base in South Carolina. He died on April 3, 2013 in the crash of an F-16 near Bagram Airfield, Afghanistan during Operation Enduring Freedom. He was 29 years old.

The Air Force was in James’ blood. Both of his grandfathers were Air Force veterans. His parents met at the U.S. Air Force Academy, and both served.  His father rose to the rank of Major General, and is now retired after spending 33 years in the Air Force. James’ twin brother, and younger brothers are currently on active duty.

“They grew up on fighter Air Force bases around the world,” Dee Steel has said about her children, “They grew up watching fighters take off and land in their backyards.”

James was valedictorian of his high school class and graduated from the U.S. Air Force Academy, where he earned a degree in astronautical engineering.

James was selected for a coveted spot in the Euro-NATO Joint Jet Pilot Training program in Texas, and followed on with an assignment to Luke AFB, Phoenix, Arizona to learn to fly the F-16 Fighting Falcon. At the time of James’ graduation from the F-16 Pilot Course, he and his father flew in a four-ship of F-16’s.

“It was exciting to be up there with James,” said his father, Major General Robert Steel, “It is one of the rare opportunities in any career, especially in fighter aviation.”

James was then deployed with the 80th Fighter Squadron to Kunsan Air Base, Korea, in 2009. Upon his return, he was assigned to 77th Fighter Squadron, Shaw Air Force Base, South Carolina as the chief of mobility. James’ fighter pilot call sign was Mano.

In October of 2012, James deployed to Afghanistan. During his tour, he provided close air support for troops. His bravery in the jet saved countless lives, and he prevented an ambush of American troops from insurgents. On April 3, 2013, James died when his F-16 fighter jet crashed returning from an air support mission in Afghanistan. James last spoke with his family five days before his death.

“He was upbeat, as usual, and excited to get home after nearly six months in Afghanistan,” said his family.