Extremely isolated, the ghost town of Bannack, Montana, sits along Grasshopper Creek in Beaverhead County. Founded in 1862 by a group of fortune seekers known as Pike’s Peakers who stumbled upon gold within the creek’s waters. The purity of the gold lines was a significant gold discovery and brought prospectors to the remote town in flocks. Although the inspiration behind the town’s name came from the Bannock tribe, when the settlers officially registered the town as part of America, the government misspelled it, and it became known as Bannack.

As the first capital of the Montana Territory, Bannack peaked in 1863 with 5,000 people residing there. Among the settlers included the common miners, but the town had a number of other offbeat characters, including Civil War deserters, outlaws, and businessmen looking to profit big from the emerging town. Untamed and unruly, Bannack grew a reputation for its lack of law and order. When the nearby Virginia City came into existence in 1866, the road connecting the two cities became one of the most dangerous trails in the West. With over 100 men murdered in 1863, the residents determined to make the area safer formed the Montana Vigilantes. The group administered “rough justice” and hung over 20 men for the crimes, including the sheriff of Bannack, Henry Plummer, the rumored leader of the dangerous gang.

Between 1870-1874, the decline of Bannack began. With the easy-to-reach lines exhausted of their resources, getting to the gold became a challenge, and residents headed to other booming towns. The courthouse was abandoned in 1881 and turned into a hotel as the streets became scarce. In 1895, the first electric dredge created a small revival for Bannack but left the town’s structures in ruins. By 1930 few remained, and by the 1940s, the streets were completely empty. 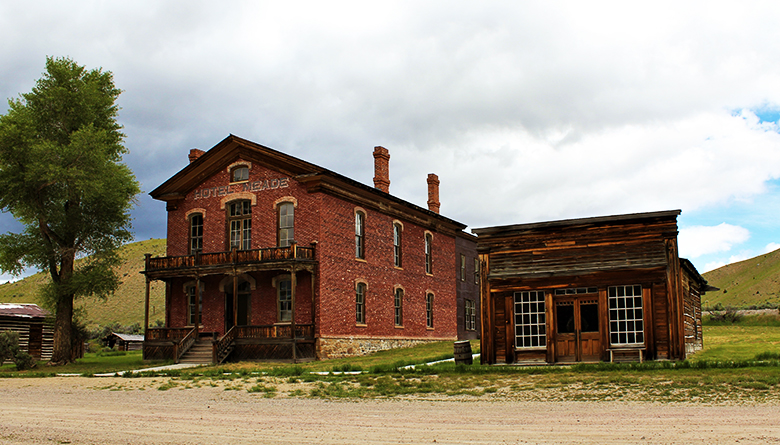 While a fire destroyed much of the town today, 60 of the original log buildings still stand today. In 1954, the ghost town was turned into a state park and is now open to the public year-round.

The spirits of the residents who died during the height of Bannack’s existence continue to make their presence known. Infamous Sheriff Henry Plummer’s spirit has been a mainstay in the town since his death. Visitors experience cold spots and the echoes of children crying at Hotel Meade, the former courthouse, and the apparition of a young woman, identified as Dorothy Dunn, a teenager who drowned in a dredge pond.