Humphrey Bogart stars in this adventure tale with a Western flavor! Three down-on-their luck gold prospectors hit a treasure of gold. Is this a lucky break—or the thing that will break them all?

Humphrey Bogart and Walter Huston star in this multi-Oscar-winning film with a strong Western sensibility that’s all about gold, greed, hope and betrayal.

It’s 1925 in the tiny town of Tampico, Mexico and two hard luck Americans are desperate for a break. Fred C. Dobbs and Bob Curtin are homeless and broke, and their last boss, who promised them $8 a day to build oil rigs, skipped out without giving them a dime.

At a local flophouse, they meet an old gold prospector named Howard. Howard is a talkative man with rousing tales about the pleasures and perils of searching for gold. His stories immediately capture Dobbs’ and Curtin’s interest. 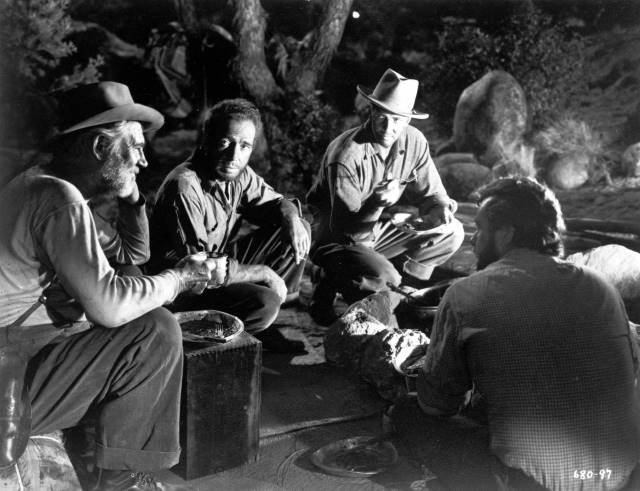 Later, at a local bar, Dobbs and Curtin run into the boss that never paid them. Fists are thrown, a brawl commences, and they wring their back wages out of him. When Dobbs then wins a small jackpot in the lottery, he and Curtin ask Howard to take them gold prospecting. They pool their meager funds together for supplies and head to the Sierra Madre.

The journey there is fraught with danger, and they are forced to fight off a bandit attack. When they finally get north of Durango, they head into the mountains and begin prospecting in earnest.

Eager to learn, Dobbs and Curtain follow Howard’s lead as he takes them deep into the most remote parts of the Sierra Madre. Howard is not just a big talker – he’s a man with a lot of knowledge, and even though he’s older, he’s familiar with the lay of the land and seems hardier than his partners.

In the beginning, the three friends agree to split everything equally. But unearthing a fortune comes at a price. As the bags of gold ore begin to pile up, paranoia, greed, and distrust start multiplying…and it’s hard to tell who should be considered a friend or a foe.

With danger lurking around every corner in this vast and unforgiving wilderness, the trio needs to stay focused and united…if they can.

When all is said and done, will the treasure of the Sierra Madre be the break they needed? Or will it be the thing that breaks them all?

By Henry C. Parke Whether you’re a fan of television crime dramas, thrillers, comedies, or Westerns, from the 1950s on, you... READ MORE

Amanda Blake: From Hollywood Hopeful to Gunsmoke Legend.  Amanda Blake lived a colorful life and held her own as a woman, actress,... READ MORE