The Bogarts lived in an Upper West Side apartment and owned a 56-acre estate in Canandaigua Lake in upstate New York. Whenever Humphrey was at the lake, he and his friends would put on plays.

Although well-read and intelligent, Humphrey was bored by school. He enlisted in the Navy during World War I and served as a coxswain. He was considered a model sailor, and after his enlistment ended, he worked as a shipper and a salesman, and joined the Coast Guard Reserve.

Despite his family’s belief that acting was a lowly profession, Bogart recognized that he had a talent for it. So, from 1922-1935, he acted in 17 Broadway productions. During this time, he married his first wife, Helen Mencken, in 1922. Then, he divorced her in 1927 and married his second wife, Mary Philips in 1928.

In 1929, Humphrey Bogart appeared for the first time in a film called The Dancing Town. In 1930, he was cast in Up the River, where he met Spencer Tracy, who nicknamed him “Bogie” (and the name stuck). 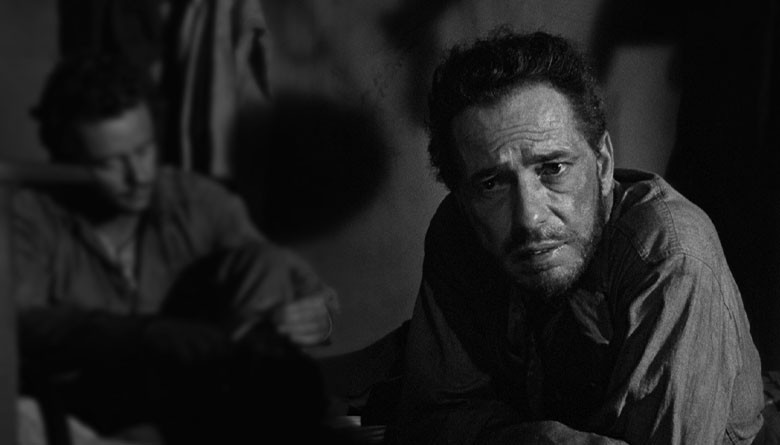 In 1935, Bogart’s supporting role in the Broadway production of The Petrified Forest caught Hollywood’s attention. Warner Brothers wanted to make the film, but they wanted Edward G. Robinson to star in it.

Since Leslie Howard was set to star in the film—and he owned the production rights—he told the studio: “no Bogart, no deal.” When it was clear that Howard would not budge, the studio relented, and agreed to cast Humphrey Bogart.

The film opened to great critical reviews and was a box office smash. Now, at last, Humphrey Bogart was a Hollywood star.

Life In The “B” Movies

For the first 34 movies that Bogart made with Warner Brothers, he was typecast as a gangster. He joked that he was either “electrocuted, shot, or hanged” in the movies he made from 1934-1940.

With stardom, Bogart had hoped to find top billing and a chance to grow as an actor. His second wife, Mary, refused to join him in Hollywood, preferring to stay in New York for her own career. Finally, they divorced in 1937.

In 1938, he married his third wife, Mayo Methot. Although an actress in her own right, she was known more for her heavy drinking, violent outbursts, and turbulent marriage to Bogart.

The Making of An American Icon

The 1940s ushered in some of Humphrey Bogart’s most celebrated work. In 1941, he starred in High Sierra in a better role than he ever had before. John Huston was the screenwriter, and they became great friends and drinking buddies.

1941 was also the year that Bogie starred in The Maltese Falcon. This film noir classic marked John Huston’s directorial debut and was a big commercial hit.

In 1942, Bogie starred in Casablanca. This role brought him his very first Academy Award nomination for best actor; the film went on to win the Academy Award for Best Picture. Thanks to the Maltese Falcon, Bogart became the highest paid Hollywood actor of his time.

1944 saw Bogart starring in To Have and Have Not, co-starring Lauren Bacall. If Mayo Methot was jealous before, no one could blame her for being jealous now. There was no denying the chemistry between Bacall, a 19-year-old starlet, and 44-year-old Bogart.

While critics weren’t thrilled, audiences were—and made To Have and Have Not one of the top 30 grossing films of the year. Audiences were delighted to see them paired up again in The Big Sleep in 1946, Dark Passage in 1947, and finally, in Key Largo in 1948.

Following Bogart’s divorce, Bacall and Bogart married in 1945. They had a son, Steven, and a daughter, Leslie. They remained happily married for the next 12 years. 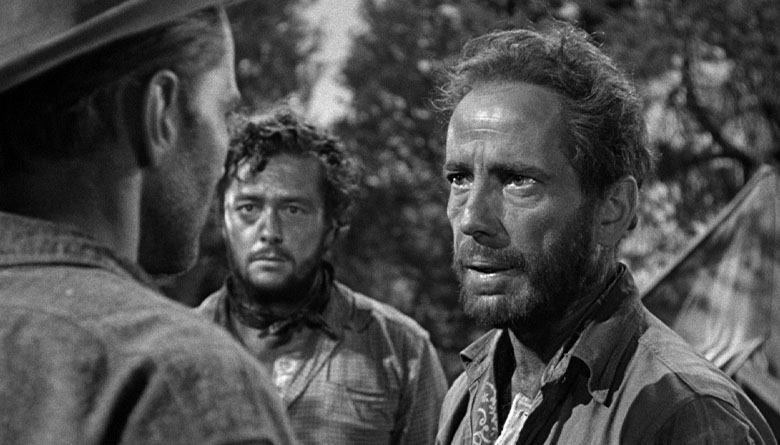 The end of the 1940s were good years for Bogie. He got a better contract from Warner Brothers and was allowed to start his own production company, Santana Productions.

In 1948, he starred in The Treasure of the Sierra Madre, which won the Academy Award for Best Supporting Actor (William Huston) and for Best Director (John Huston). Some say it featured one of Bogart’s greatest performances.

In 1951, Bogie starred in The African Queen. Shot on location in the Belgian Congo, and despite the heat and harsh conditions, Bogart’s performance as captain Charlie Allnutt finally won him the Academy Award for Best Actor.

In 1954, he played Captain Queeg in The Caine Mutiny. His riveting performance earned him his final Academy Award nomination for Best Actor. In the same year, he delighted audiences by starring in Sabrina with Audrey Hepburn and in The Barefoot Contessa with Ava Gardner.

Bogart continued to work in movies, television, and on radio until 1956, when he was diagnosed with esophageal cancer. Despite surgeries and chemotherapy, Bogart’s health quickly deteriorated. Humphrey Bogart died on January 14, 1957, just twenty days after his 57th birthday.

Forty-two years later, The American Film Institute named Humphrey Bogart the greatest male star of classic American cinema. Although Bogie is gone, his movies live on…and INSP fans can enjoy one of his best, The Treasure of the Sierra Madre, right here!