Westerns Ride into the Sunset
The early 1970s rang the death knell for most Western series. “The television industry got a little paranoid, I think, when Robert Kennedy got assassinated, and Martin Luther King [Jr.] got assassinated, and related it to gun violence. And what did they replace it with? Car wrecks. But [The High Chaparral] was a good show to drop, and we were all very surprised.” Later that year Rudy guest starred in an episode of The Virginian, which had been re-Christened The Men From Shiloh for its final season. “That was The Animal, and I played a deaf-mute Indian boy. And every cowboy that I grew up watching on television was in that episode: Andy Devine, Shug Fisher, Chuck Connors, Jay Silverheels—all those faces, and the whole show is about me!” he remembers gleefully.

Rudy went on to have a long and varied career, appearing in dozens of film and television series. He was a regular on Hunter, played a hold-up man opposite Clint Eastwood in Dirty Harry: The Enforcer, and played real-life outlaw biker and Charles Manson informer Danny DeCarlo in 1976’s Helter Skelter.

Looking back on his childhood in Lawton, Oklahoma, Rudy remembers, “When I was about 10, we moved to the north side of town, which was not far from Gate 4 of Fort Sill. It was about a mile. And that’s where Geronimo spent the last 15 years of his life. That’s where he died. That’s where he’s buried. So, Geronimo was my boyhood hero. Him and Mickey Mantle, who was another Okie. In my first-grade class picture, everybody’s standing there smiling, with no teeth. And I had my Mickey Mantle t-shirt on; they didn’t have Geronimo T-shirts then.”

In 2014, Rudy began portraying his boyhood hero in a one-man show called Geronimo: Life on the Reservation. It was written for him by novelist Janelle Meraz Hooper, “And I got my friend Steve Railsback, who played Charles Manson in Helter Skelter, to direct.” It’s a tragic story, and a heartbreaking performance, about a man who feels not self-pity, but a great disappointment, and a desire to be treated with dignity, and something approaching fairness. He performed it all around the country, until Covid. “I’ve done it for the chief of the Warmspring Apaches, and I did it for the two Cherokee Chiefs up in the Tulsa area, and in New Mexico. And they loved it. They don’t say much, if you get anything.”

Back in the Saddle… 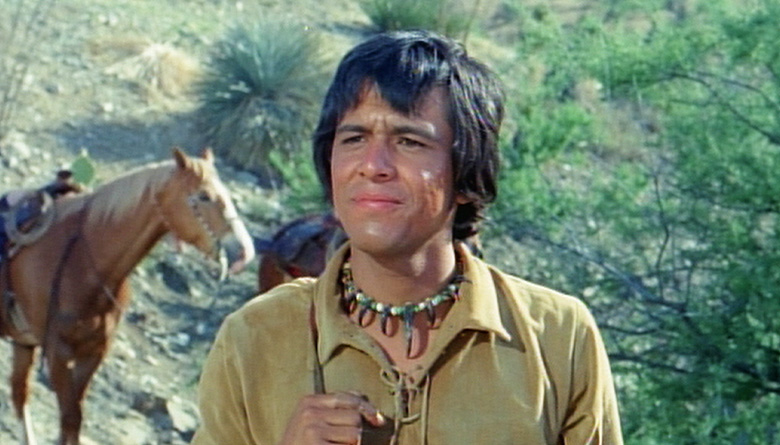 And then along came Yellowstone, a show not as dissimilar to The High Chaparral as one might assume. Kevin Costner’s John Dutton and Leif Erickson’s Big John Cannon are both ranchers with dysfunctional families, defending their land against Natives who see it as their own. And Rudy Ramos’ position in both is rather close, as a man with friends on both side—not a member of either, and a sounding board for both. As Felix, he’s a Native who’s known Dutton for years, and whose daughter is married to Dutton’s son. As Wind, he’s a half-Pawnee who works for and respects Cannon, but feels for the Apache, as well. “There’s a lot of similarities with Yellowstone and High Chaparral. You asked me why I thought Chaparral was so popular. It was the storyline, the writing, and then the people that did the roles, and brought those words to life. It happened with Chaparral, and happened with Yellowstone, right out of the gate.”

Rudy’s first scene with Kevin Costner is memorable. Some of Dutton’s cattle have wandered onto Native land, and the new Chief doesn’t want to give them back. Dutton helicopters in, and walks up to Felix, sitting on the tailgate of his pick-up. “So Taylor came to us, we ran through the lines a little bit. Then Taylor went back on the other side of the fence where they were setting up the shot. And that took a while. So, Kevin and I were just talking. And in five minutes we were talking like we were old friends. And we’ve stayed that way.

“I’ve had a lot of, you know, pats on the back, but I’ve never been shown the respect from my fellow actors, the camera people, and everybody on the other side of the camera that they’ve shown me. My last day of filming season one, I said my last line. Then Taylor said, ‘Okay, that’s a wrap on Rudy.’ Taylor came up to me and he said, ‘I am so proud of you.’ And that really meant a lot to me and almost brought me to tears. So, he gave me a big hug, patted my cheek, and I turned around, and there was a whole line of people, the camera crew, and everybody else.”

Of course, Rudy has no idea how long Felix will continue on Yellowstone. “I said, ‘Taylor, when you get rid of me, you’ve gotta make it a big thing, a really big tear-jerker. And he always says, ‘I’m not gonna get rid of you. I only get rid of the young people, not the old people.’ Well, that’s comforting.”

One scene that made a big impression on fans, “was one of the scenes with Luke Grimes. He’s my son-in-law, I love him, but we’re getting ready to fight about some cattle who roamed onto the reservation. It ended with me saying, ‘Until they find a cure for human nature, a man must stand with his people.’ And I put my hands on his shoulders. ‘And you are not our people.’ Now I have people come up behind me wherever I am, put their hands on my shoulders and say, ‘You are not our people.’ That’s one of those scenes that people, they remember it.

“And I’ve always been grateful for the fans. The fans of High Chaparral, you know, they’re the best, because they’re still fans 50 years later. INSP, I hope they keep doing what they do, because they keep the legendary Westerns alive.”