Brothers fighting on opposite sides of the Civil War return home to learn their family has been kidnapped by marauding raiders. Now they must put their feelings aside, and work together if they are to find their siblings alive.

Tom Selleck, Sam Elliott, Dominique Dunne and Katharine Ross star! Based on the novel of the same name by renowned Westerns author, Louis L’Amour, this film is packed with action, suspense and high emotion as a family crisis leads to a life and death rescue mission. Though released in 1982, The Shadow Riders is reminiscent of a classic Western with strong leading actors, vengeful bad guys and a touch of romance. 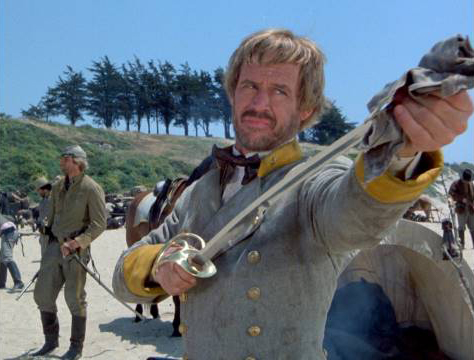 The Civil War has just ended as Mac Traven, a Union soldier and his brother Dal, a Rebel, make their way home to Texas. Both have endured the horrors of war and want only to return a relatively normal life. But there’s no time to rest, confront their differences or dwell on old grudges, because now the brothers must find a way to unite and fight a new battle, one that hits a lot closer to home and heart.

Unwilling to accept their side’s defeat in the war, a marauding band of Confederate guerillas, led by the bloodthirsty Major Ashbury, has kidnapped the Traven sisters and Dal’s tough-as-nails girlfriend, Kate. The band of outlaws intends to sell the women as slaves to a brothel in Mexico in exchange for guns and ammunition. The brutal renegades are dead set on continuing to fight for the rebel cause. They’re also holding Mac and Dal’s younger brother, Jesse.

The brothers need help hunting down the ruthless raiders. They head to the Converse County Jail where their uncle, Black Jack, a hapless and disreputable character, is being held on dubious charges by a sheriff who’s been hunting him down for years. Mac and Dal break their uncle out in spectacular fashion and the trio takes off to catch the kidnappers before it’s too late. Meanwhile, Jesse manages to escape and joins his brothers and uncle in the battle to free the women.

Tom Selleck – Western Perfectionist By Henry C. Parke Looking back to 1990, when she flew halfway across the globe to co-star with... READ MORE