The original classic Western! Seven gunslingers successfully defend a small town against thieves. But the vengeful bandits are back, and now the gunmen and villagers prepare for the fight of their lives.

A small, struggling Mexican village just over the American border is repeatedly terrorized by a group of ruthless bandits led by the notorious Calvera. On a regular basis, the thieves descend upon the town taking food and supplies desperately needed by the residents. The townspeople are powerless against the gang, and after Calvera shoots an outspoken farmer, the people know better than to even try to resist. But now, left with little for their own survival, the village leaders resign themselves to a fight with Calvera and his men on their next raid. 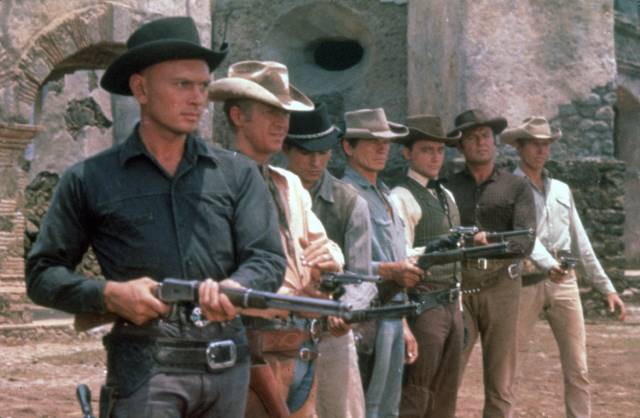 The villagers travel to an American town intending to barter for weapons. There they meet Cajun, Chris Adams, a veteran gun fighter who is well-known for his marksmanship. Chris suggests they hire gunmen to defend the town instead of buying weapons and ammunition, as that would be less expensive. After a good deal of convincing, Chris agrees to take the low-paying job, and goes about recruiting his men: his friend Harry Luck, who suspects Chris is going on a treasure hunt; hot-tempered greenhorn Chico; drifter and gambler on a losing streak, Vin Tanner; Irish-Mexican Bernardo O’Reilly a gunslinger who’s fallen on hard times; adventure-seeking cowboy, Britt; and rounding out the gang, Lee, a gunman on the lam and struggling with sudden insecurity. Chris and his men learn they will be vastly outnumbered, and the best they can hope for is that Calvera loses interest in the village and finds a more lucrative target for his aggression, especially when he sees the seven gunmen, armed and ready to fight.

While waiting for the bandits to return the seven men get to know the villagers. Bernardo spends time with the children. Chico is smitten with the lovely, young Petra. Harry, still convinced there’s treasure to be found, talks to villager after villager hoping to discover its whereabouts, to no avail.

Lest the men enjoying the simple village lifestyle let their guard down, their wishful thinking of Calvera backing off is soon put to rest when the bandits strike the town. But this time, the thieves suffer great losses as Chris and his men aided by the people, fight for their homes and meager possessions.

Sweet victory is short-lived, however, because when Chris and the men return from an attempted raid on Calvera’s camp, they find a turn of events they never expected. Now they have a choice: Go home…or face the gunfight of their lives.